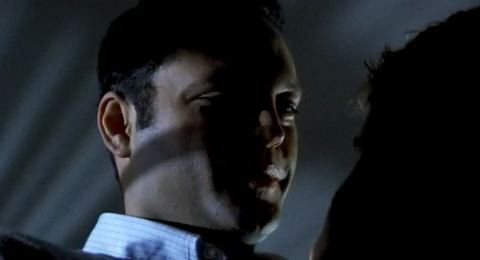 When twelve-year old Danny (Matt O'Leary) witnesses his stepfather Rick Barnes (Vince Vaughn, "The Cell") commit a murder, no one believes him, not even his mom (Teri Polo, "Meet the Parents"). But even though Danny has a reputation for telling tales, his dad, Frank Morrison (John Travolta), instinctively fears for him and sets out to protect his family in "Domestic Disturbance."

Cross 1949's "The Window" with 1987's "The Stepfather," plus a small dash of "Message in a Bottle" and you've got "Domestic Disturbance." While this is clearly commercial Hollywood product with absolutely no surprises up its sleeve, veteran director Harold Becker ("Sea of Love," "Malice") delivers a (mostly) effective thriller.

Danny, who broke windows when his folks split, went truant when they divorced and ran away when his mom announced her remarriage has used up the good will of Southport, Maryland's police Sergeant Stevens. Struggling boat builder dad tries to smooth the waters by inviting Rick, Southport's newest yuppie, along on a father and son sailing day and Danny grudgingly begins to accept the guy. Frank, himself, however is intrigued when the sudden appearance of Ray Coleman (Steve Buscemi, "Ghost World") makes Rick momentarily seize up in the middle of his wedding vows.

When Danny overhears his mom tell Rick she's pregnant, he stows away in Rick's SUV, hoping to get to his dad's for a heart to heart, but instead, he witnesses Rick kill the passenger he's picked up at an out of town motel. The police are more than skeptical. Requisite trouble ensues.

Lewis Colick's screenplay (story by Colick, William S. Connor and Gary Drucker) is strictly by the numbers, following movie logic that may make seasoned film goers roll their eyes (all obstacles to the Frank's family being reunited are removed, the killer illogically strikes out when his identity is uncovered instead of fleeing, etc.). However, "Domestic Disturbance" is a solidly crafted film, making it a cut above the hack jobs that have been coming out of Hollywood of late.

John Travolta is believable as a decent and caring dad who's a bit down on his luck. Vince Vaughn is well cast in the Dr. Jeckyll/Mr. Hyde persona of Rick Barnes. Cinematographer Michael Seresin takes advantage of Vaughn's height, shooting from below to make him tower over Danny. Teri Polo, who made little impression in the overrated "Meet the Parents," is better here as a frustrated mom trying to balance her lives as mother and new bride. Susan Floyd ("Big Night") is good as Frank's down to earth girlfriend Diane, although the script gives her a convenient excuse to depart early on. Young Matt O'Leary is right on target.

Becker's direction is tight and shows some polished visual flair. Production designer Clay A. Griffith ("Almost Famous") has substituted Willmington, North Carolina for Southport, Maryland, giving the film one of those small touristy towns that are wealthy on the surface while its blue collar denizens provide the life blood, perfectly underscoring the difference between Rick Barnes and Frank Morrison. Mark Mancina's ("Speed") score is effective.

"Domestic Disturbance" achieves what it aims for.