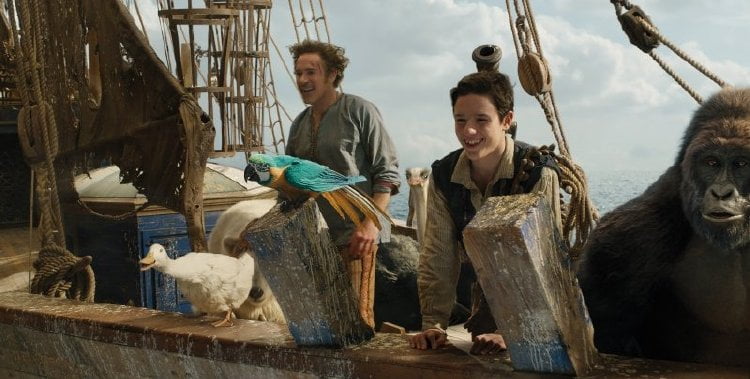 In Victorian England, a veterinarian Is so revered for his ability to talk to animals, the young Queen (Jessie Buckley, "Wild Rose") gifts him a sanctuary with a manor house, but when the man’s adventuress wife Lily (Kasia Smutniak) dies at sea, he turns into a recluse, living alone with his menagerie. One day, two children, Tommy Stubbins (Harry Collett, "Dunkirk"), a boy bucking his family’s tradition of hunting, and Lady Rose (Carmel Laniado), a future lady-in-waiting from Buckingham Palace, arrive at the same time with requests that will reanimate “Dolittle.”

Hugh Lofting’s ‘Doctor Dolittle’ is proving a tricky book to adapt for the screen. The first, 1967 musical starring Rex Harrison bombed. Eddie Murphy’s attempt at a modernized version fared better at the box office if not critically. Now cowriter (with Dan Gregor & Doug Mand)/director Stephen Gaghan ("Syriana," "Gold") teams up with Robert Downey Jr. and his producer wife Susan and goes back to the original period setting for the best adaptation to date, if not one that is entirely successful.

Oddly, the film continually seems to echo “Pirates of the Caribbean” with its star, a once great independent artist now selling out to franchises eccentrically outfitted and weirdly accented (Downey chose to go with Welsh). The bulk of the film occurs during a sea journey featuring a talking parrot, pursuit by the British Royal Navy, a stint in jail in a pirates’ port, underwater creatures and the hunt for a treasure in a hidden cave. Many of the animals, like the parrot Polynesia (Emma Thompson), dog Jip (Tom Holland) and gorilla Chee-Chee (Rami Malek, perhaps jealous that Rocketman's Taryn Egerton played one in "Sing") are familiar from the books, but there is no pushmi-pullyu, perhaps pushed back to be pulled into a sequel.

After an animated opening giving us back story, the John Dolittle we first meet looks like an eccentric wizard with his long scraggly hair and beard and brocade robe. Charmingly, he’s playing chess with Chee-Chee, the playing pieces live mice. Outside, Lady Rose has discovered Stubbins caught in a net trap with the injured squirrel he accidentally shot. He’s more shocked than she when the door is answered by Chee-Chee, Stubbins’ reaction alarming the anxious mountain gorilla in turn.

Lady Rose has come to inform Dolittle that the Queen, in dire health, needs him, a plea he rejects, but he does snap into action to save red squirrel Kevin (Craig Robinson), Stubbins receiving a chewing out for his part in the injury. But once it’s pointed out that the Dolittle sanctuary ‘for life’ grant was based on the Queen’s life and not his own, John sets off for the palace, a carriage carrying polar bear Yoshi (John Cena) and wooden-footed duck Dab-Dab (Octavia Spencer) while he rides Plimpton (Kumail Nanjiani, "The Big Sick"), an ostrich who largely keeps his head in the sand.

Dolittle meets his old college nemesis, Queen Victoria’s palace physician Dr. Blair Müdfly (Michael Sheen), who has been treating Victoria with leeches. Dolittle dons goggles giving him a bug-eyed look (a flash back to Murphy’s visual gag) and plunges his head into an aquarium to consult with Leonora, an octopus who clues him in to the nefarious poisoning plot of Lord Badgley (Jim Broadbent). Leaving Lady Rose in charge of overseeing the Queen’s meals and his walking stick Styx on the frame of a Turner painting as a ‘listening device,’ Dolittle sets sail with his menagerie to find the fruit of the Eden Tree, the only known antidote, its location noted in his wife’s missing journal. He has one week to save the Queen before she succumbs to the toxin.

The film gives Downey Jr. a chance to repeat the father/son dynamic he shared as Iron Man with Tom Holland’s Spider-Man, this time taking Stubbins into an apprenticeship when the young man’s affinity for understanding animals becomes apparent. There is also an amusing encounter with the pirate king Rassouli, lord of Monteverde isle (Antonio Banderas), who turns out to have an unexpected tie to Dolittle. But the real star of “Dolittle” is visual effects supervisor John Dykstra, whose talking animals (which also include escape artist giraffe Betsy (Selena Gomez),
sugar glider Mini (Nick A. Fisher), fox Tutu (Marion Cottilard), tiger Barry (Ralph Fiennes) and Humphrey the whale) really delight, only dragonfly James (Jason Mantzoukas) rendered cartoonishly. And yes, there is also a dragon (Frances de la Tour), whose presence in the film’s trailer caused a whole lot of ruckus on the Internet, but which works in context, at least given that POTC vibe. The vocal cast create true characters, Thompson’s Poly also serving as our narrator and Dolittle’s moral compass, she and Nanjiani the only readily recognizable voices. The film’s production design (Dominic Watkins, “Snow White and the Huntsman”) proffers a Victorian world wittily altered just enough to encompass Dolittle and his animals’ quirks.

The main problem with the film, really, is its pacing, as the whole adventure begins to bog down on Monteverde isle (and that dragon has a bit to do with this issue, even if its Ace Venturaesque arc ends with an amusing bagpipes gag). Fortunately, things pick up again for the finale, one which not only sees the Queen saved, but Stubbins’ uncle (Ralph Ineson, “The Witch”), aunt (Joanna Page, TV’s ‘Gavin and Stacey’) and cousin rethinking their hunting livelihood. This "Dolittle" is just good enough to maybe be a launching pad for a better sequel.