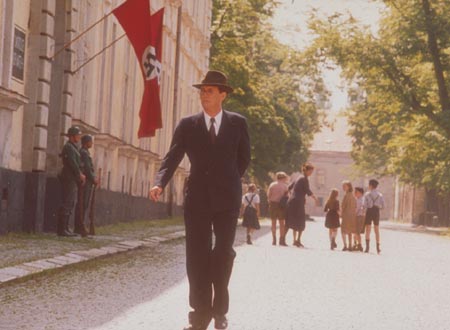 Josef Cizek (Boleslav Polivka) is saddened when the Jewish Weiner family, who provided employment to his Czech town, are ejected from their homes by the Nazis and sent to a camp. Josef must also endure visits from Horst Prohazka (Jaroslav Dusek), a German he befriended and employed before the war who obviously has romantic inclinations towards Josef's wife Marie (Anna Siskova). When David Weiner escapes and returns to his hometown, the Cizeks hide him in their storeroom and try to keep Horst off guard in the 2000 Best Foreign Language Film nominee "Divided We Fall."

Roberto Benigni started a trend with "Life Is Beautiful." While "Divided We Fall" doesn't provide as many laughs as the Benigni film, it's more comical than tragic and lays on the sentiment with a more cynical touch. Director Jan Hrebejk has crafted a humanistic story about 'what abnormal times can do to normal people.'

Everyone in their town knows that Josef and Marie are childless through no choice of their own. The onset of WWII and the dissolution of the Weiner factory has made Josef content to eat, smoke and lay on his couch while Marie busies herself dusting the tapestry of her namesake, the Virgin Mother, which hangs above it.

Horst, sporting a Hitler-like moustache, brings forbidden delicacies to his former boss and his pretty wife. Josef had befriended Horst when his fellow Czechs didn't exactly welcome the German, and now that the tide has turned in Horst's favor, must endure his prodding to come and join him working for the SS Officer (Vladimir Marek) who's taken over the Weiner villa.

When David Weiner (Csongor Kassai) becomes their hidden secret, Josef and Marie must play increasingly dangerous games to keep Horst's suspicions at bay, until, at last, Marie concocts a false pregnancy which the sterile Josef insists she make real with the assistance of David.

While Hrebejk's biblical references and baby making slapstick become somewhat labored, his gentle comedy nonetheless stands true to his title, where no man is condemned merely by the side history doles out for him. Hrebejk is particularly blessed by a stellar performance from Dusek, whose initially coarse Horst is redeemed by the subtle complexities the actor brings to the man.

Another comedy about the Holocaust? It took some the film-going populace a while to accept the popularity of Roberto Benigni's heartwarming tale about a father and son in a Nazi concentration camp in "Life Is Beautiful." Now, Czech filmmakers Jan Hrebejk and Petr Jarchovsky take a similar theme and go the black comedy route in a story about a couple in a small, occupied town who make the dangerous decision to hide an escaped Jewish prisoner in "Divided We Fall."

Josef (Boleslav Polivka) and Marie Cizek (Anna Siskova) are a childless couple who are trying to live a normal life in the face of his sterility and the occupation of their small town by the German army. One night, Josef meets the son, David Weiner (Csonger Kassai), of his former, Jewish
employer and learns that the young man is the sole survivor of his family.  He escaped from a concentration camp and returned home to collect some hidden jewelry before trying to escape his own certain death.

Josef makes the snap decision to hide the frightened refugee, opening himself and Marie up to danger as they try to balance their humanitarian deed with survival under the Nazis. Complicating matters are the frequent, unexpected visits by Josef's former colleague and, now, Nazi collaborator,
Horst Prohazka (Jaroslav Dusek), a slimy toady who openly lusts after Marie. The couple must maintain a semblance of normalcy to keep their secret hidden and Josef decides to go to work for Horst to cover their tracks.

This doesn't sound like comedy and "Divided We Fall" is far from being a ha-ha funny film, but the dark humor the filmmakers inject into this survival tale help to take the edge off the subject dourness. Think of this as the reverse of "The Diary of Anne Frank," where the focus is on the
couple hiding the refugee. David is symbolic in several ways: as a friend and neighbor in need; as the child the couple could never have; and, he is the Christ-figure as he "sacrifices" himself to father a child with Marie, an act that will, in the end, save them all.

While Boleslav Polivka and Anna Siskova are fine as the couple, and Csonger Kassai looks the part of the repressed, innocent Jew, there is one perf that surpasses them all. Jaroslav Dusek stands out as Horst, the oily, overbearing Nazi collaborator who hitches his future on the tail of the conquerors. With his severely clipped moustache and the little hair he has on his balding pate combed over, a la Adolph himself, and his pudgy body, he personifies the collaborating bureaucrat - he is, at once, menacing and comical. His is an outstanding perf.

The look of the film, with slight sepia overtones, is in keeping with the period it depicts. The budget is obviously small and the filmmakers make do with limited use of props and costumes - there are no marching hordes or massive air raids shown here. Sets and costume are simple and to the point.

"Divide We Fall" doesn't have the impact of "Life Is Beautiful" or the power of "The Diary of Anne Frank." It is an interesting character study and gives us a glimpse into the limbo world of an occupied town during war, but it never grabs your heart like those other movies.