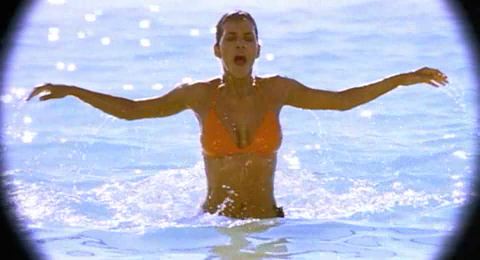 After James Bond (Pierce Brosnan) is busted trying to nab Colonel Moon's (Will Yun Lee, "What's Cooking?") attempt to black market weapons in exchange for flawless South African diamonds, he spends fourteen months being tortured in North Korea before gaining his freedom in an MI6 swap for Moon's henchman Zao (Rick Yune, "The Fast and the Furious"). Then M (Judi Dench) coldly informs James they only got him out because the death of an American agent was attributed to his singing - he's persona non grata. Bond hooks up with Chinese Intelligence in a revenge mission to get Zao, who he discovers in Cuba undergoing a DNA transplant that will completely alter his appearance, coming back to "Die Another Day."

Last year's Oscar winning Best Actress Halle Berry joins the Bond family as an American CIA operative, a 'good' Bond girl who is the first to be the man's equal. Berry's saucy, full-bodied performance gives this aging series a much needed kick, making "Die Another Day" one of the most entertaining Bonds in years.

After the opening sequence where Bond outmaneuvers Moon to his death in a hovercraft race over land mines, we're treated to a particularly stylish title credit sequence featuring fire and ice ladies, scorpions and flashes of Bond being tortured all to Madonna's theme song. After escaping MI6's hold in Hong Kong, Bond meets up with Jinx in Havana and his first bout of frisky sex in over a year. Bond finds Zao in a diabolical clinic that uses the DNA of those who won't be missed, but Zao, only partially transformed, escapes Bond. To Bond's surprise Zao also escapes Jinx, who makes a spectacular exit diving into the sea from a cliff top.

Back in London, Bond picks up the diamond trail with out-of-nowhere entrepreneur Gustav Graves (Toby Stephens, "Possession"), a showy adventurer who keeps his PR rep Miranda Frost (Rosamund Pike), an Olympic fencer in her own right, working overtime to keep him in the limelight. After a particularly vicious fencing duel, Graves invites Bond to Iceland, where he plans to demonstrate his latest boon to mankind. It's a good think James runs into Jinx again, because nothing is what it seems in the icy North and the British and American agents must join forces to stop world domination from an evil empire.

Brosnan's slowing down enough to make some of his action sequences seem a far stretch, but he's Bond in all other aspects. His wild man appearance on release from prison strongly recalls Connery's savage masculinity. A shave and a tux later, he's the suave, arch agent. Berry's just great as Jinx, a sexy, fully capable partner with a talent for put downs. Stephens, as a villain modeled on Bond himself, gives good sneer while Yune, with diamonds embedded in his face from Bond's Korean explosion, gives good icy stare. Dench returns providing gravity while Cleese is entertaining taking over the role of Q. Pike has interesting, fresh presence as Frost, but Michael Madsen, as Jinx's boss, seems out of place.

While director Lee Tamahori ("Along Came a Spider") gets good work from his cast, he shows weakness staging the action sequences. That fencing contest is a keeper, but a car chase inside an ice palace drags. The climatic finale is off kilter, with interior action not conveying the same dire predicament as exterior shots. Worse, the special effects are really subpar, with obvious blue screen work and one entire sequence, where Bond 'surfs' a melting ice cliff using jet car parts, so inept it looks more like an early computer model for the scene than anything that should be appearing in a commercial feature.

The screenplay by Neal Purvis & Robert Wade ("The World Is Not Enough") features the usual double entendres ("I don't like cockfights," Madonna's fencing instructor, Verity, tells Bond and Graves), although a martini references falls deadly flat. They do show wit, though, with Bond's connection with Chinese Intelligence. Nods to Bonds past come via some amusing old gadgets in Q's workshop (including a lethal Beatle boot! - a nod to Austin Powers perhaps?), Jinx's homage to Ursala Andress's bikini and the return of the Astin Martin. Miss Moneypenny (Samantha Bond, "The World Is Not Enough"), though, is given a thoroughly modern method to show her lust for Bond.

"Die Another Day" is far from the best Bond, but it makes a good case that there's life in the old boy yet.

The cheesy guitar starts playing - da-da-da-la-da-da da-da-da-la-da-da - and Bond, James Bond, appears and shoots straight at us, the viewer. Thus begins the 20th official entry in the longest running movie series ever in "Die Another Day."

There are things that one comes to expect in life and a new James Bond movie is one of them. It all began 40 (yes, 40) years ago with "Dr. No" and the memorable scene of shapely, bikini-clad Ursula Andress emerging from the sea, setting the stage for all Bond babes to come. Now, the high tech world of super secret agent 007 is brought to the screen once again and Pierce Brosnan, in his 4th reprise as the irrepressible Bond, is ready to take on the world's bad guys.

James Bond and his two-man commando team secret themselves into the demilitarized zone between North and South Korea in order to thwart an arms deal by renegade Colonel Moon (Will Yun Lee). Things go explosively wrong during a spectacular hovercraft chase and James is taken captive, tortured mercilessly for 14 months and, just before his certain death by execution, he is traded back to the British for a North Korean agent, Zao (Rick Yune). But, Bond's boss, M (Judi Dench), believes that he compromised her command and rescinds his double-O status and it is up to Bond, James Bond, to exonerate himself and uncover a world shaking plot involving diamonds and one big mother of a laser hovering menacingly above the earth.

In typical Bondian fashion, the action spans continents as the story moves from Korea to Hong Kong, where James enlists the reluctant aid of a high-ranking Chinese Communist official. The double-naught spy then heads to Havana, Cuba where he investigates the goings on at Isla Los Organos, a secret medical facility that specializes in replacing a client's DNA to give them a completely new identity. He meets Jinx Johnson, a beautiful, coral-color bikini-clad lady who rises out of the surf to be lustfully greeted by our hero. Jinx has her own agenda, though, and while James seeks answers to an increasingly complex puzzle involving counterfeit diamonds, she makes her move against one of the clinic patients, none other than Zao. (Zao, a true Bond bad guy, is there to alter his scarred, diamond-studded face given to him complements of 007.)

The action heads to London where James, reinstated with his infamous license to kill, is given into the hands of weapons-meister Q (played with grand humor by John Cleese who replaces the late, venerable Desmond Llewelyn, the Q of 17 of the Bond flicks). Q supplies his not-so-favorite double-O spy with the usual high tech weaponry including, you guessed it, a new car! This time, Bond is back in the driver's seat of a brand new Aston Martin loaded with the usual high tech gadgetry, including a cloaking device that renders the car invisible.

While in jolly old England, James meets Gustav Graves, an incredibly wealthy adventurer and diamond broker who mysteriously went "from nothing to everything in no time at all. We all know that Gustav is Bond's real nemesis, especially when they go toe-to-toe in a no holds barred fencing duel that utilized foils, sabers, broad swords and samurai blades. The encounter garners an invitation for James to attend an exclusive gala in an Icelandic ice palace where Graves reveals his "gift" to mankind - a satellite that can duplicate the power of the sun. (We know, wink-wink, that there is evil intent behind this so-called gift). High-speed ice chases ensue as James and Zao do battle with their fully loaded cars. (Don't you wish, sometimes, that your car were packed with rockets and machine guns, especially in rush hour traffic?) Things finally return to North Korea for the big, big, big climax.

You can expect the usual tongue in cheek quips all along the way. For instance, when James meets one of Zao's henchmen, Mr. Kil (Lawrence Makoare), his response is "Now there's a name to die for!" More bon mots are, expectedly, scattered liberally amongst the action bits, giving "Die Another Day" its trademark Bond humor.

Techs vary from the sublime to the ridiculous. Set designs, like the ice palace, are really cool (pun intended), as are the locations that show panoramic views of Hong Kong, Havana (at least, it looks like Havana with the requisite 50's vintage cars tooling around) and London. The special F/X extravaganza is mostly very well done with a couple of obvious and chintzy sequences that aren't up to the rest of the quality technical work. The action is nearly non-stop and is, at times, stunning. If you don't like one action bit you only have to wait a few minutes before you get something else and different.

The acting suits the comic book-style adventure as Pierce Brosnan, once again, comfortably wears the role of James Bond like a well-tailored tuxedo. Halle Berry is first rate as NSA spook Jinx and is a cut above the usual Bond babe as she is his equal in every way. (There are rumors about a spin-off flick focusing on Jinx, which would be a first for this franchise.) Toby Stephens, as Gustav Graves, lends the right amount of sneering arrogance to his character as a man who strives to be perfect and brutal in every way. Rick Yune gets to be a Bond bad guy the likes of Oddjob and Jaws with his diamond studded face and mean-as-a-snake countenance.

Dame Judi Dench, as M, gives dignity to her role as the Brit spy chief. Rosamund Pike does a decent job as Miranda Frost acting as fencing master and MI6 spy with questionable loyalties. Michael Madsen is generic and without any dimension as chief American spook Damien Falco. Samantha Bond (no relation to James) gets to flesh out her small role as Miss Moneypenny in an amusing virtual reality tryst with 007. Madonna, who sings the title song for the film, has a small cameo and, at least, doesn't embarrass herself.

Director Lee Tamahori does yeoman's work in coordinating the efforts of his large cast and crew but there is little of an auteur's imprint on the proceedings. "Die Another Day" is a worthy entry in the pantheon of James Bond movies. I guess I'll always hold the warmest regard, though, for the Sean Connery vehicle "Diamonds Are Forever."