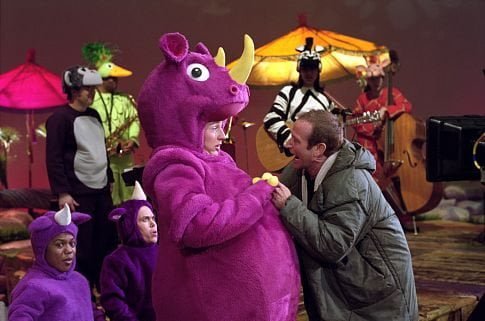 Rainbow Randolph Smiley (Robin Williams) has it all. He is the star of highest rated kids' show on TV, lives in a fabulous penthouse on Manhattan and has all the perks he could want. But, greed clouds his good judgment and he gets busted in a payola scam, losing everything. Enter Sheldon Mopes (Edward Norton) and his alter ego, Smoochy the Rhino, the big, pink, squeaky clean, kid-friendly character that replaces the reviled Randolph in Danny DeVito's "Death to Smoochy."

Throw Smoochy from the train! This anticipated flick wastes its talent with a high-concept screenplay by Adam Resnick ("Lucky Numbers") that takes its one joke premise and bludgeons it to death.

Tough-as-nails Nora is amazed when Smoochy becomes a success, but she steamrolls Sheldon's attempts to take control of his show. Sheldon always walks on high moral ground and is appalled by the network's merchandising. Enter Burke, (Danny DeVito, "Heist") a smooth-talking 'agent' who's a front for mobster Merv Green (Harvey Fierstein, "Safe Men") who makes fortunes putting on kiddie ice shows under the guise of charity. Burke builds Sheldon's power up before chipping at the ice show. Sheldon gets pressured from a third front when Irish mafia maven Tommy Cotter (Pam Ferris, "Matilda") forces him to hire washed up boxer Spinner Dunn (Michael Rispoli, "Two Family House"), a sweetly incompetent head case who adores Smoochy.

Just when Smoochy and Nora fall into lust over their mutual childhood idolization of Rickets the Hippo, Rainbow Randolph sets Smoochy up for a huge media downfall. Randolph succeeds but trips himself up when he attempts to woo his old time slot back from ex-lover Nora. Rather inexplicably, Randolph ends up on Smoochy and Nora's team, but Green's determined to rub the rhino out for infringing on his ice show territory.

Apparently, DeVito instructed his cast to play their parts as broadly as possible, resulting in several charmless, cartoon-like performances. Norton's shackled into a one-note character of naivety and there isn't enough wit in the writing to make his corny routines funny. It's refreshing to see Williams break out of his cloying mode, but he's given nothing to work with either. First he's rotten to the core, then he's redeemed. His character suffers the most from the script's repetitive nature - a kids' show host using foul language gets stale pretty quickly.

DeVito makes Catherine Keener look brittle and Stewart boring while bringing nothing to his own character we haven't seen before. Cheers to Michael Rispoli, whose washed up fighter is annoyingly simple, but more endearing, and Pam Ferris whose mob matron lulls with a lilting Irish brogue while working with astonishingly brutal methods.

The film's climactic ice show, featuring Smoochy's surreal retelling of his travails, tries to be clever by parodying "The Manchurian Candidate," but by this time the Zamboni man would have been a welcome relief.

Helmer DeVito, working from a script by Adam Resnick, attempts to do too many things in this story about ethics, payola, vice, murder, kids' TV and revenge. The director has a past reputation for comedy on the darker side with his insipid "Throw Momma From The Train" and the darkly disturbing "War of the Roses." (Some might say that "Hoffa" carries on this tradition but I'll leave that to another discussion.) "Death to Smoochy" makes the effort to deal with this mish-mash of a comedy in a dark manner, but with its central character a big, cheerful rhino, the noir aspect DeVito is going for is derailed. Sure, there is darkness in William's Rainbow Randolph as the disgraced kids' TV host who descends into paranoia, suicide and irrational revenge after digging his own tragic hole because of greed, but there is so much else going on.

It would take up too much time to delve into all the plot lines thrown together by scribe Resnick. There is the creation of The Smoochy Show with its off beat, though politically correct, songs (like "The Step dad Song"), which are amusing at times, but the presentation is mostly just loud with lots of screeching kids. An Irish mobster subplot makes for more confusion as does an evil monolithic organization call "Parade for Hope" that skims millions from children's charities. There is also a morality play in the guise of a kids' ice show, Smoochy On Ice, which incorporates a sequence straight out of "The Manchurian Candidate." Toss in an innocuous romance between Sheldon and his boss, Nora (Catherine Keener), include the greedy machinations of a charity juggernaut, add some mayhem and you get "Death to Smoochy"

Unfortunately, none of the story lines are fully explored, especially the one revolving around Randolph. Williams puts an edge on his character than has not been a part of the actor's repertoire in a long, long time, but he is hamstrung by the chopped up manner in which Rainbow Randolph is manipulated by the screenplay. He is, at once, reviled and felt sorry for, though the script doesn't explore the alcohol and drug induced haze, and other pressures, that make Randolph Smiley deranged. It's a lost opportunity, through no fault of his own, as Williams's performance seems to cry out for a better movie.

Edward Norton, usually a strong talent in any film he is in, is also hog-tied and over-suited in the role of Sheldon/Smoochy. He's an aw-gee-and-golly kind of guy who keeps a sunny outlook no matter what, but is sorely tested by the corruption running rampant around him. If it isn't greedy marketing types, such as his boss Nora Wells (Keener) and her boss Marion Frank Stokes (Jon Stewart) - both lifeless characters - it's Sheldon's slimy agent Burke Bennett (Danny DeVito in a role that he has beat to death). Or, it's mob pressure by Irish lady gangster Tommy Cotter (Pam Ferris) to get her cousin, punch-drunk ex-pug Spinner Dunn (Michael Rispoli), a regular spot on Sheldon's show. Ferris and Rispoli outshine the stars of the film and this reveals the main flaw - there is no one to like here, except for a couple of minor characters. Even Sheldon got on my nerves.

The flashy production and costumes by Howard Cummings and Jane Ruhm work hard to give life to "Death to Smoochy" but the director and writer take away any chance of recovery by cast or crew.