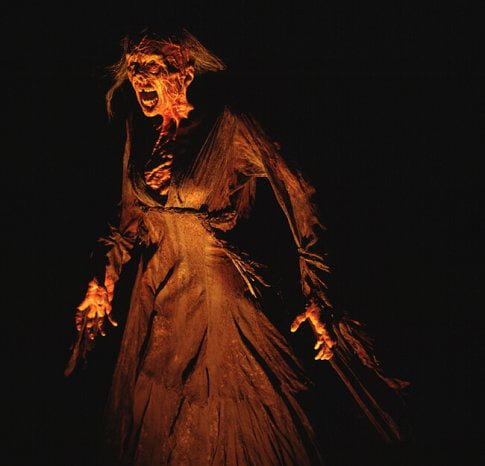 Kyle (Chaney Kley) has been considered nuts ever since he insisted the Tooth Fairy, and not himself, killed his mother when he was young. Legend has it that the vengeful spirit visits children when their last baby tooth falls out and kills those who dare to look at her. When Kyle's childhood girlfriend Caitlin (Emma Caulfield, TV's "Buffy the Vampire Slayer") is faced with a little brother hospitalized over his desperate fear of the dark, she hunts down Kyle to help Michael (Lee Cormie). Kyle returns and once again must face his fears in his hometown of "Darkness Falls."

This is a silly amalgamation of (better) horror films we've seen before that's not the least bit scary. We know we're in for a slice of cheese when the film opens with a low rent Blair Witch type fable narrated over a montage of rippling old Victorian photographs. Darkness Falls has spent over a century under the curse of an evil spirit that kills children, but the police seem to never have connected the dots and the townspeople never seem to have heard about a victim other than Kyle.

After we learn that the denizens of Darkness Falls hung an elderly woman with a history of kindness to children when two of them got lost one day, we see the events which placed Kyle in a mental institution. Things are immediately off-kilter when we're expected to accept that a preteen Kyle would be preparing to go to bed while his girlfriend Caitlin climbs in his window asking if he wants to go swimming at the local quarry. For someone who makes herself at home, Caitlin seems never to have been in Kyle's room before.

Once Kyle's mother has been slain by the Tooth Fairy, who makes dreadful noises and flits about like a witch on a broom wearing a porcelain mask, we jump forward to Caitlin and Michael's plight. Both Kyle and Michael have been drawing pictures of the same eerie vision, just like the people who saw the Mothman in a film that had the sense not to show us its monster so often. Kyle's presence brings on the Tooth Fairy and he's locked up again on suspicion of murder when people start getting killed, but he escapes after she takes out most of the police station in the midst of a well-timed power outage. Kyle makes it to the hospital just in time to keep Michael's doctors from putting him in a sensory deprivation chamber, a medical version of 'let the baby scream itself to sleep.'

Neophyte director Jonathan Liebesman tries to dredge up chills with loud noises and those unexpected black cats that jump out of total darkness. He does inspire actor Kley to say 'Stay in the light' about 568 times, all with conviction, but Cormie seems to have been directed to speak in a babyish voice which becomes irritating. Screenwriters John Fasano and Joe Harris meld the "Blair Witch" with "Pitch Black" with the independent inspiration of neither. Cinematographer Dan Lausten ("Brotherhood of the Wolf") keeps the action visible in challenging lighting situations, including Stan Winston's ("Jurassic Park") Tooth Fairy, who ostensibly cannot enter the light.

"Darkness Falls" is a competently made, if not very effective, horror yarn. For a really scary Tooth Fairy, try Tom Noonan in Michael Mann's "Manhunter."

150-years ago, in the town of Darkness Falls, a kindly old woman named Matilda Dixon would collect the lost baby teeth of the town's children and, in exchange, give each a gold coin. When two of the kids go missing, Matilda, dubbed the Tooth Fairy, is blamed and murdered by a frenzied mob. Before she died she cursed the town and her vengeful spirit waits to pounce on any who see her. One young boy, Kyle, escaped her clutches but his mother was brutally killed. Now, another boy faces the same danger and grown up Kyle (Chaney Kley) is called in to help before "Darkness Falls."

That bang you hear is the sound of the door slamming on the end of the prestige 2002 films. The creaking sound you hear is that same door opening for the new films of 2003 slipping into your local multiplex. With the hoopla of last year's major releases just about over, the studios are gearing up for the winter doldrums and releasing the dreck that no one would have paid a moment's attention to only a few short weeks ago. Trash, like "National Security," and mediocrity, like "A Guy Thing," are out there now to trade your hard earned bucks for less than stellar entertainment.

"Darkness Falls" fits the bill in the mediocrity department, but its first-time helmer, Jonathan Liebesman, takes a good shot at bringing this run of the mill monster-in-the-dark story to the screen. The film starts out economically enough with a short narration over the brief action as the townsfolk of Darkness Falls exact its revenge on the accused, but innocent, Matilda. Her curse upon the town, with her dying breath, is reinforced after her death when the two children she supposedly murdered turn up unscathed, proving her innocence. "Vengeance is mine" for the Tooth Fairy and her spirit has exacted its revenge on the town, for its murderous affront, for many decades - even though no one seems to realize it despite 150 years of unsolved murders.

This brief introduction is followed by another interlude where young Kyle (Joshua Anderson) has just lost his last baby tooth. He is visited by Caitlin (Emily Browning), a pretty young thing that accepts Kyle's invite to attend a school dance and gives him his first kiss. As the boy lies asleep in his bed, later, strange noises and shadows swirl around him and he runs out of the room in a panic. His mother (Rebecca McCauley) thinks it is all in the boy's imagination but when she goes into his darkened room to prove it she is brutally murdered by some "thing." Kyle is institutionalized then sent to a foster home for his formative years.

Jump ahead 12 years and Caitlin (Emma Caulfield), now an adult, is in the hospital attending to her little brother Michael (Lee Cormie). The young boy had recently lost his last baby tooth and, since then, has been haunted by the vision of the Tooth Fairy and is convinced that, if it gets dark, it will kill him. As such, he has not slept for more than ten minutes at a time and Caitlin admits him to the local hospital. A battery of tests shows nothing is physically wrong with the boy and the medicos declare that he suffers from "night terrors." Caitlin, after their years apart, contacts Kyle, who was diagnosed with the same condition after his harrowing experience over a decade before, and asks for his help.

Kyle has been fighting his own demon for all these years, living in the omnipresent pool of light to stave off the evil of the Tooth Fairy. He arrives at the hospital with a bag full of flashlights and tries to assure Michael that all will be well. When Caitlin's boyfriend Larry (Grant Piro) takes Kyle to a local watering hole for a drink, they are confronted by one of the bar's denizen who remembers the stories about Kyle's mother's murder. When the thug, Ray (Angus Murray Lincoln Sampson), jumps Kyle outside the bar (which borders, as you'd expect, on a dark and creepy forest) he is yanked into the trees and butchered. Kyle is arrested for Ray's murder, but a thunderstorm, lost power and a visit to the jail by the Tooth Fairy changes everything.

In the meantime, the doctors have decided, of course, that the best thing to do for Michael, who is now deathly afraid of the dark, is to put him a sensory deprivation chamber to prove that there are no monster, just imagination. It becomes a race as Kyle tries to save the boy, his sister and himself and put an end to the reign of terror that grips Darkness Falls.

The original story by Joe Harris (with the screenplay by John Fasano, James Vanderbilt and Harris) doesn't come with any surprises and few scares, but it does move along briskly as tormented Kyle comes to grips with his long-time fears. The Tooth Fairy, for the most part, keeps to the edge of the action in a flurry of flapping robes and its porcelain mask, coming center stage only when ready to snatch away a hapless victim. It is typical jump-out-at-you-from-the-dark kind of scariness that will appeal to the crowd that likes this kind of thing. There is even the obligatory cat jumping out and scaring the bejeezus out of one of the characters, as befits this kind of horror/monster flick.

Newcomers to the big screen, Chaney Kley and Emma Caulfield, aren't given much to do to develop their character, as expected in an 85-minute horror flick with a steadily mounting body count. Kley, as Kyle, is relegated to repeatedly implore everyone to "stay in the light" and, in typical fashion, no one listens to him until it is too late. Caulfield carries through her worried expression as she helplessly watches little brother, Michael, struggle with his nightmare demon. Young Lee Cormie delivers his dialog in a stilted manner, but this makes sense once you learn that the Aussie-born youngster is called upon to put on an American accent. The rest of the cast is fodder for the Tooth Fairy's carnage.

Techs are typical for this kind of horror movie. When the theme is "the monster can't get you when you stay light," the filmmakers do all they can to keep things dark and in shadow. Danish Cinematographer Dan Laustsen keeps things looking creepy with his roving camera. Other techs are OK.

"Darkness Falls" is a small step up from some of the other 2003 movies hitting the streets. It's a no-brainer that aims to entertain even if it doesn't enlighten.