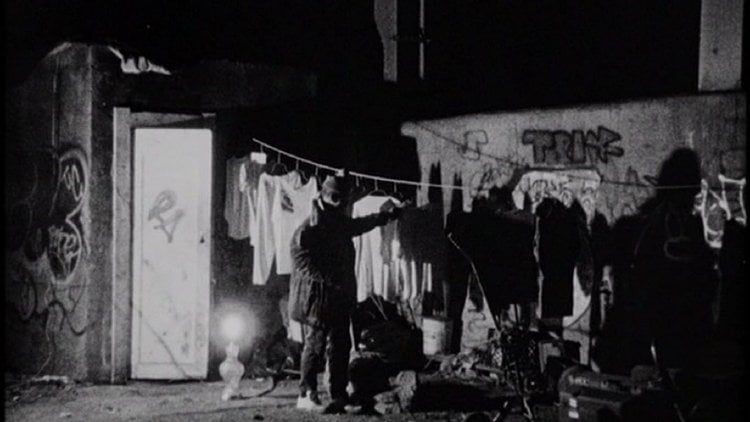 We follow the grainy black and white image of Greg, a black man, walking down a street before he slips away from our view, entering the underground tunnels of Amtrak where he's made his home. It's an impressive home, with four walls and a TV. Greg explains, while using his electric shaver, that he can tap into Amtrak's power and not pay any bills, although he regrets the lack of running water. Greg makes his living turning other peoples' garbage into profits, claiming he can find just about anything a person would want for free. He doesn't have the nicest house, though, telling us that we should see Tommy's.

Tommy's a young, strapping Irish kid who keeps a number of dogs fenced in around his 'property.' He makes his living gathering empties and says he can make $60-70 dollars working all day on a Friday. Julio also keeps pets and, along with his friend Lee, takes us through a picture show of his former cats, birds and assorted animal companions (Miss Peaches, a gerbil, apparently being a favorite) like a Cheech and Chong of the pet set. The barely comprehensible Ralph, a reformed drug addict, is more practical about his dog, who he's trained to keep the rats out of his abode. Dee, a crack smoker, moves in with Ralph after her home is torched and the two bicker like an old married couple. Henry, a distinguished older black man, whips up a batch of corn bread while wearing a Drakkar Noir jacket.

Singer paints a fascinating portrait of a resilient and inventive (burglar alarms fashioned out of pot lids) group of people even as we're told that 80 percent of them are crackheads. He slowly allows the characters to build before showing a few of them recounting how they ended up in the tunnels (Dee and Ralph both because of the horrific fates of their children). Then Amtrak officials descend (filming not allowed) to clear everyone out (for their safety) while others lobby to ensure they get housing.

The conclusion is too simple. No mention is made of the fate of all those pets who were given so much screen time. We see the residents struggling to break down their solid structures with sledge hammers - were these scenes staged by the filmmaker or did officials demand the action? They all seem surprisingly eager to leave their home and are happy to live in real apartments, but we're given no clue as to their proximity - is the community still intact within one building? Singer doesn't tell us.

Still, "Dark Days" is an engrossing account of a world most of us could not have imagined inhabitted by people whose fates we care about.