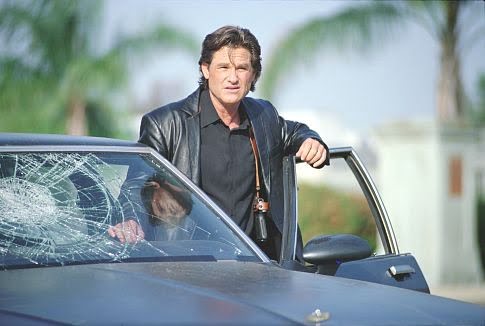 The grainy video of the Rodney King beating by four Los Angeles police officers opens "Dark Blue" as we arrive in April 1992 on the eve of the verdict by the all-white jury far removed from where the blatant police brutality took place a year before. The image shifts to a seedy motel room where detective sergeant Eldon Perry (Kurt Russell) watches in an alcohol-clouded funk. He rises from the edge of the bed, loads and straps on his formidable arsenal and prepares for battle. Jump back five days and Eldon, a member of LA's elite Special Investigations Squad (SIS), is assisting in the investigation of the fatal shooting, in the line of duty, by his young, naïve partner Bobby Keough (Scott Speedman). The Internal Affairs board exonerates the rookie cop but it is clear that there is some not-so-honest covering up going on.

Bobby Keough (Scott Speedman, "Duets") seemingly has it made. His uncle Jack (Brendan Gleeson, "Gangs of New York") is the head of SIS, his partner Eldon Perry (Kurt Russell, "Vanilla Sky") is a favored veteran and he's just pulled through his first shooting investigation. Each of these assets will turn into a serious debit as Bobby's loss of innocence becomes the final sin carried by the blackened soul of Sgt. Perry in "Dark Blue."

Ron Shelton ("Tin Cup," "Bull Durham") leaves the sporting world behind to direct a dark drama about police corruption. Set against an LA in the grip of the Rodney King trial, David Ayer's ("Training Day") adaptation of a James Ellroy story is a more believable take on the 'corrupt older cop tries to seduce trainee partner' than the incredible twenty-four fireworks of "Training Day" and its thoroughly evil protagonist.

Perry's boozy, cock-of-the-walk bravado has worn down his wife (Lolita Davidovitch, "Play It to the Bone") and drawn the disapproving eye of LA Deputy Chief Arthur Holland (Ving Rhames, "Baby Boy") who is determined to prove Perry lied to the SIS board. Betrayals of both good and bad intent pile one upon another until Perry finds himself in a literal hell so many have wished upon him.

"Dark Blue" is a character study of a man so used to using ends to justify means that he's lost his way entirely. It takes the death of illusion, a marriage and a dependent to open Perry's eyes to his own moral wasteland. Kurt Russell, sporting a lived in face for the first time, thoroughly inhabits Perry as a not particularly bright follower of the old boys' school. His lack of courage in facing the results of his own actions can be seen by his proclivity for approaching the LA wives of his opponents through their mailboxes. He can't look directly at most of the women who populate the film and refers to an innocent victim as a 'facer.'

Speedman shows the strain of fighting his natural tendencies to please his corrupt elders. He's a weak kid facing bullies. Rhames and Gleeson represent the black and white of the script, with Rhames' entirely honorable (except for a blackmailable chink) police officer squaring it off with Gleeson's utterly reprehensible official. Michele is also a bit too earnestly righteous as Holland's assistant and Bobby's lover, but Davidovitch gets the weary, fed-up sexiness of a put upon wife just right.

The Rodney King trial is obviously a metaphor for both the racial lines drawn within the LAPD and its rampant corruption, but the script indulges in racial stereotyping itself by having whites corrupted by money while the Achilles heel of otherwise upright blacks is sex. The far richer, if equally obvious, metaphor is that of the LA riots for Perry's personal hell. If the filmmakers had trusted their audience, they would have ended the film right there in South Central, but instead tack on a grandstanding confrontation scene that is Perry's salvation and Russell's opportunity to go head to head with Pacino's 'You're out of order!' scene.

Cinematographer Barry Peterson ("Zoolander") stays intimate with the action until his glorious coverage of Perry's descent into the riots. Using smoke to partially obscure the landscape, Peterson turns LA into an otherworldly war zone where horrors suddenly come into view around every corner. Original music by Terence Blanchard ("Barbershop") starts off jazzy and grows moodier, reflecting Perry's emotional journey.

"Dark Blue" gets no mileage from using the Rodney King beating to make an illuminating statement on racism, but it works beautifully on a simpler level as a backdrop for one man's self realization.

"Dark Blue," made a decade after the red-letter events of 1991 and 1992 as the power of the state, and its abuse by some, comes into question with the video documented, blatant beating of the unarmed King by four white LAPD cops. As the film unfolds we are presented with the character of Sgt. Eldon Perry, a hard drinking, cynical, red-necked racist cop who, long ago, stopped seeing his own corruptions. When he and Bobby are sent to investigate the brutal, senseless murders in a convenience store, the owner pleads ignorance as to why his store was targeted by killers. At least, that is what he wants the police to believe.

Kurt Russell, as near-out-of-control LA detective Perry plays a role akin to that which won an Oscar last year for Denzel Washington in "Training Day." Both characters are over-confident cops who bend the rules to their own devices and foist their "ideals" on their young partners. Where Washington's character, Alonzo Harris, runs a group of cops operating on the very edge of control, Eldon Perry is part of an elite squad on the LAPD that also operate by its own rules. The difference between the two lay in their stories. While "Training Day" had a level of dynamic energy, I felt that the story was forced and artificial. There was far more going on than could really be fit into Alonzo's day.

Eldon Perry's experience, in contrast, is spread over a more reasonable five-day period that begins on the last day with Eldon waking up to the news of the acquittal, guzzling booze and arming himself to the teeth. Flash back to the start of the five-day period and he is assisting his higher ups in the shooting investigation of his new partner Bobby. Once the young cop is exonerated we find out that the inquiry is a sham and Eldon, in fact, did the shooting. Dark Blue" becomes a character study of Perry as we learn that the cocky senior cop has troubles of his own with a marriage on the rocks, estrangement from his son and a whopping drinking problem. Things begin to unravel as Eldon learns that the boss of the elite squad within the LAPD, Jack Van Meter (Brendan Gleeson), is in deep with murders, swindles and other illegal matters. Perry is soon the target of his own keepers because he knows too much.

Where "Dark Blue" keeps you going, besides the good performance by Russell, is when the promised verdict by the white jury is delivered. The city of Los Angeles has been maintaining a fragile calm as speculation among the populous builds over the trial's outcome. As Eldon's life reaches its bottom-most level, the city, too, hits its own low as the verdict is announced to the waiting public. Suddenly, the calm explodes into rampage as LA's black population strikes out against any and all within their realm. As the city burns up in its own rage, Eldon's life is also falling apart. As he drives the streets of South Central it is in a nightmare of fires, smoke and deadly violence. The surreal images of mob violence are indelible and Perry learns a critical lesson in right and wrong.

"Dark Blue" lacks the striking supporting performance given in "Training Day" by Ethan Hawke. Scott Speedman, as Bobby Keough, is rather bland as the naive young cop who does the bidding of his experienced partner even when his actions are morally questionable. The supporting cast is populated by an experienced team of veteran thespians, led by Gleeson and Ving Rhames as honest deputy chief Arthur Holland, and give depth to the background characters.

Ron Shelton departs from his usually lighter fare, such as "White Men Can't Jump" and "Bull Durham," in his visualization of the story (James Ellroy, "LA Confidential") and screenplay (David Ayer, "Training Day"). The director takes the material, with the exemplary performance by Russell, and crafts it into a gritty, hard-hitting look into corruption and abuse. The work fares well in comparison to its predecessor, "Training Day," as it also brings in to play the events that exploded in Los Angeles with the Rodney King verdict.

Tech aspects are solid with lenser Barry Peterson giving movement to his camera as it follows Eldon through his shaky pursuit of justice. Terence Blanchard's score suits both the period and the rough feel that Shelton gives "Dark Blue."