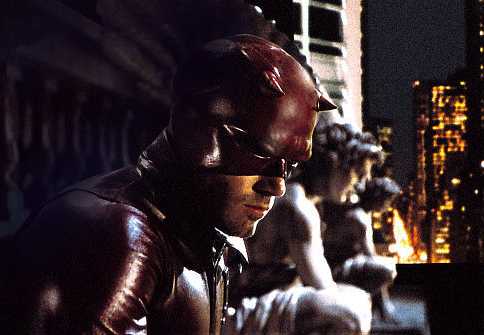 When 12-year old Matt Murdock (Scott Terra) sees his has-been boxer dad (David Keith) strong-arming a pleading victim of the mob, he runs away, despondent. A freak accident with a load of hazardous waste robs him of his sight but also has the effect of enhancing all off his remaining senses. When the mob kills his father for refusing to throw a fight the boy vows revenge on the murderer. Year later, blind Matt is now a lawyer, by day, in New York's notorious Hell's Kitchen. At night, though, he becomes the extraordinary crime-fighter called "Daredevil."

Young Matt Murdock (Scott Terra, "Eight Legged Freaks") has a traumatic childhood. A bully who likes to beat him up (Robert Iler, HBO's "The Sopranos") tells the boy his dad is a bag man. Matt discovers this truth for himself, and running away, is in an accident that blinds him. Shamed, Jack Murdoch (David Keith, "Behind Enemy Lines") returns to the ring in his forties, but refuses to hurt his son again when mob boss Fallon demands he take a fall and so is murdered in front of Matt's unseeing eyes. Bent on vengeance, the adult Matt (Ben Affleck), now a lawyer, twists his father's old boxing persona into the mysterious "Daredevil."

Writer/director Mark Steven Johnson ("Simon Burch") fashions a satisfying B movie entertainment from a second tier Marvel comic book hero. "Daredevil" broods like Batman, travels like Spiderman and dreams of vengeance while squatting with rooftop gargoyles like "The Crow's" Eric Draven. The film spends its first twenty minutes setting up Murdoch's motivation, then takes a little longer shedding the onslaught of references to those other films before establishing its own identity. Bring on the sequel.

Ben Affleck - not the most obvious casting choice for a dark super hero - balances the character's moral conflicts with a lively 'eye' for the ladies and jocular relationship with law partner 'Foggy' Nelson ("Swingers'" Jon Favreau, providing witty and warm comic relief). If Murdock loses his pro bono cases by day, he brings vigilante justice by night as Daredevil, then confesses his sins to an unabsolving parish priest. Every comic book hero needs a reporter trying to unmask him. Here it's Ben Urich (Joe Pantoliano, HBO's "The Sopranos") who tries to figure out whether the man in the red horns' intentions are good or evil.

Matt literally sniffs out Elektra Natchios (Jennifer Garner, "Catch Me If You Can") at the coffee shop one day. He's not only met his match, but the person who will lead him in a dark path to his ultimate goal. Elektra's initially wary, but intrigued by Matt's school yard martial arts foreplay (the stars' tackling of their own stunts in this scene shows - it plays a little too slowly and carefully, like Mel Gibson's dancing in "What Women Want," but garners good will nonetheless).

In a second meeting romance blooms in a lovely scene that utilizes the special effects created for Matt's shadow world, a laser technique which shows us how Daredevil 'sees' by the sound reflected from objects. Raindrops on a rooftop define Elektra like a sparkling jewel (although the effect should have been more subtle - raindrops would not have defined her irises). After a sex scene of heightened senses, Matt is invited to the black and white ball, where he will meet both Elektra's wealthy Ambassador dad Nikolaos (Erick Avari, "Mr. Deeds") and his nemesis Wilson Fisk, not yet unveiled as the notorious Kingpin (Michael Clarke Duncan, "The Green Mile"). Kingpin's imported Irish assassin Bullseye (Colin Farrell, "The Recruit") visits the tragedies upon Daredevil that will focus him upon his long time target. Farrell has found his metier as the bald, motorcycle riding Irish thug who has turned a pub talent for throwing darts into a lethal skill.

Johnson shows talent for blending humor into a dark tale, but loses a few points for choppy execution. It is unclear why editors Armen Minasian ("Don't Say a Word") and Dennis Virkler ("Collateral Damage") leave in one arbitrary scene featuring secretary Karen Page (Ellen Pompeo, "Moonlight Mile"), when she is clearly cut from the rest of the film. Urich throws a match at one of Daredevil's crime scenes to display his signature double D (in yet another nod to "The Crow"), but the symbol is never repeated. The film feels like it could have used another fifteen minutes of breathing room. Cinematographer Ericson Core ("The Fast and the Furious") engages comic book framing. Graeme Revell's ("The Crow") score is complemented with driving rock songs that are sure to become a popular soundtrack CD.

From its opening credits, where the lights of city skyscrapers reconfigure into braille titles, to its closing confluence of red symbols, "Daredevil" pulls you into its B picture world. It has more scrappy heart than some of its slicker cinematic forebears.

Comic books to movies are all the rage these days, what with the huge success of "Spiderman" and the pending (and highly anticipated by the fans) release of "The Hulk" and "X-Men 2." It comes as no surprise that another of comic book maestro Stan Lee's adapted works comes to the big screen with his "Daredevil: The Man Without Fear." But, the Daredevil is not your typical comic book hero. Matt Murdock is not a superhero with supernatural powers. Nor is he an everyman type thrust into heroic deeds out of necessity. Indeed, under the usual circumstances blind Murdock would be considered handicapped - though not in "Daredevil."

When Matt is blinded by toxic waste as a boy he may have lost his sight but the event also caused his other senses to enhance considerably, so much so that, like a bat, he can "see" in his sightless darkness. As the youngster becomes more and more at ease with his disability and enhanced remaining senses, he finds that he can surf across the rooftops of Hell's Kitchen without difficulty. When grown up Matt graduates law school, he and his best friend, Franklin 'Foggy' Nelson (Jon Favreau), hang their shingle in Hell's Kitchen, taking on those clients who need them most. But, that's during the daytime. At night it is a different story as Matt dons his secret identity and sets about cleaning up the low-life scum of the neighborhood.

Matt's vigilantism comes under the scrutiny of the police and tabloid reporter Ben Urich (Joe Pantoliano) who sets out to discover the identity of the secretive crime fighter. In the meantime, Matt "spots" the very beautiful martial arts master Elektra (Jennifer Garner), daughter to Greek Ambassador Nikolaos Natchios (Erick Avari), a man who wants to end his dealings with the most power man in the city, Wilson Fisk (Michael Clarke Duncan), better known in certain nefarious circles as The Kingpin. The powerful crime boss, however, won't let his partner break away so easily and hires the Irish assassin known as Bullseye (Colin Farrel) (for obvious reason).

So, you have a crime fighter with a mission, a crime boss bent on taking total control of the city's underworld and a hired killer who takes great pleasure in his craft. Throw into this mix the capable and sexy daughter of the murdered ambassador, a case of mistaken identity and the unique talents of our hero and you get an action comic book come to life. Sprinkle this mélange with the humor relief provided by Foggy and we end up with a darkly hued but amusing bit of winter entertainment.

Like most super hero comix brought to the screen, "Daredevil" is heavy on the visual action and fight scenes and light on character development. The initial foreword explains how Matt became the Daredevil in typical action hero fashion. Like Batman, Matt "sees" his father murdered and vows to bring the perpetrator to justice. Along the way, like the new sheriff in town, Daredevil cleans up the badlands of New York's Hell's Kitchen from his perch atop the neighborhood buildings. Just like Spiderman, Matt effortlessly surfs and swings across the rooftops with amazing ease. Unlike your typical superhero, though, Daredevil's body shows the ravages of his nocturnal escapades.

No one is going to garner any Academy Awards for acting but everyone does a good job in giving spark to their two-dimensional figures. Ben Affleck is earnest as the Man Without Fear and meets the physical challenges of the role. Jennifer Garner is nicely showcased as the capable and, when necessary, deadly Elektra. And, she looks good in leather. Michael Clarke Duncan is imposing as the notorious crime leader Kingpin (in a comic book menacing way). Colin Farrell has the most fun as the flashy assassin Bullseye with his cocky attitude and maniacal laugh as he gleefully fulfills his deadly contracts. Jon Faveau is amusing as Matt's clueless friend and partner while Joe Pantoliano gives his usual snappy, smartass performance.

Helmer/scripter Mark Steven Johnson, using characters developed by Stan Lee, Bill Everett and Frank Miller, musters his behind-the-camera crew to moves things along in a style that befits the source material. Lensing, by Ericson Core, and production design, by Barry Chusid imbue a crisp, dark look to the action sequences that help to hide the effects that rely more on stunt work (a pleasure to see) and less on CGI. Visual effects, as when Matt "sees" Elektra in the rain, are striking and interesting to watch. James Acheson's costume work is slick and clever, befitting the nature of the movie.

"Daredevil" is, first, for the fans of Stan Lee's oeuvre and, then, for superhero comic fans everywhere.