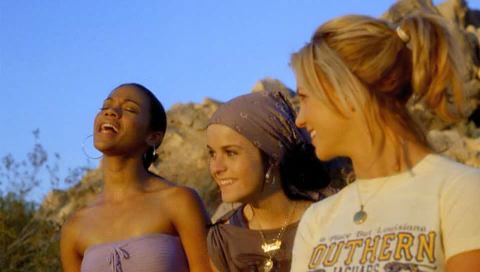 Three little girls bury a box of secrets beneath a tree, vowing to stay best friends forever, but high school graduation finds them grown very apart. The most troubled, pregnant Mimi (Taryn Manning, "crazy/beautiful"), persists in getting the three back to dig up the box and invites Lucy (Brittany Spears) and Kit (Zoe Saldana, "Get Over It") to join her on a trip to California. Inexplicably, they agree, and together with driver Ben (Anson Mount, "Urban Legends: Final Cut"), they set off, each with her own agenda in "Crossroads."

We know we're in for a laugh fest when Brittany's movie vehicle begins by introducing her as a virginal Valedictorian singing along with Madonna's "Open Your Heart" in her underwear to a cereal spoon. Brittany's cast as a pointy headed geek who wears Peter Pan collared blouses and goes to the prom with her nerdy, pimply lab partner. After a fit of the giggles squelches her attempt to lose her maidenhood with her prom date, Lucy arrives at midnight, still in her pink prom dress and bearing a shovel, to meet up with Mimi. Bitch goddess Kit, who barely deigns to speak to Lucy and is opening hostile to Mimi, also flounces in.

The next morning they're on the road. Mimi's heading to an audition with a record company in L.A. (nudge, nudge, wink, wink). Kit's visiting her fiance at UCLA. Lucy intends to stop in Tucson to visit her estranged mother, even though Dad (Dan Aykroyd) has always discouraged it. Their differences flair up when Ben's car breaks down, but that's nothing a little karaoke can't fix and soon they're all best of buddies again. While each of their missions ends in an uproariously, jaw-droppingly silly way, Lucy manages to get rid of that dang-blasted virginity to the man who puts her 'poem,' "I'm Not a Girl,' to music.

Spears needs not be embarrassed by her screen presence as much as by her admittance to suggesting this story which was seemingly cobbled together from the blurbs on the backs of Harlequin romances by Shonda Rhimes (TV's "Introducing Dorothy Dandridge"). Taryn Manning, so promising in her debut, should get another agent - fast! Zoe Saldana shows no affinity for establishing a character. Anton Mount is a good sport for putting up with this female frivolity, but Dan Aykroyd's dad is sad. Kudos for the ironic casting of "Sex and the City's" sexaholic Samantha, Kim Cattrall, as Brittany Spears' mom.

Brittany's fans will probably love "Crossroads." Everyone else may be able to make a drinking game out of it.