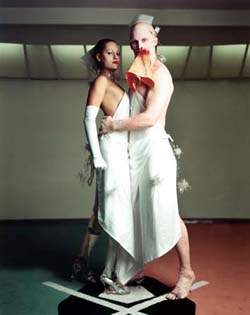 Multi-media artist Matthew Barney explores the evolution of form via Celtic mythology, automotives, biology and vaseline in his five part Cremaster cycle, which began in 1994 with "Cremaster 4" and move from a state of ascendance to descendance (the cremaster is the muscle which determines the position of the testicle) while spanning the globe. Adding Masonic rite to the mix, Barney showcases architecture with the building of the Chrysler building where he is the Apprentice to Architect Hiram Abiff (artist Richard Serra) in "Cremaster 3."

Although filmed and released out of order, the Cremaster series is numbered to progress Barney's theme. Although I have not seen the rest of the series, the third is clearly the most ambitious (it runs for three hours whereas the other 4 installments are more usually about an hour in length). Watching "Cremaster 3" is somewhat like listening to Mussorgsky's "Pictures at an Exhibition" - clearly a work of great beauty by a master artist, but one whose meaning may be obscure to the audience. "Cremaster 3" almost demands a synopsis or study. Still, Barney is such a tremendous visualist and inventive filmmaker, that his work is no chore to sit through - quite the opposite, in fact.

He begins begins at Ireland's Giant's Causeway and Scotland's Fingal's Cave where the giant Fingal clashes with Finn MacCool, before a woman's corpse (meant to be Gary Gilmore of "Cremaster 2's" story!) digs its way out of the earth and is deposited in a vintage car in the lobby of the Chrysler Building. As five Chrysler Imperials circle and smash the auto in the center, the Apprentice walks through and enters the elevator shaft, which he begins to fill with cement. Behind the building's Cloud Club bar four men enact Masonic rites (which the Apprentice has ostensibly upset) while being served the perfect Guinness through a sliding door. The bartender cannot serve a beer to the Apprentice, however, and the bar erupts in foamy chaos until he's left playing his equipment like a bagpipe. After a race of decomposing horses, the Apprentice is beaten by the Masons until his teeth fall out. Then the Architect and his men surround the Apprentice in a dental chair, and fill his mouth with a compacted Chrysler part before ascending to the top of the building which is converted into a giant Maypole.

In an extended coda entitled "The Order," where elements of the previous story and other installments are reflected, Barney, clad in a peach colored kilt with a cloth stuffed in his bloody mouth, must scale the five levels of the Guggenheim Museum to face a string of Rockettes dressed as lambs, dueling punk bands and a woman dressed like a nurse with lucite lower legs (double amputee model/athlete Aimee Mullins) who morphs into a man-eating cat.

Clearly, "Cremaster 3" requires repeat viewings or fungal accompaniment of a magical nature, yet the film is completely mesmerizing. One begins to recognize Barney's themes with his repeated use of images (ovoid/gonadal shapes, trios and triangles, the uterine shaped Cloud Club bar, transformations). The three segments of the film all refer to a father/son or mentor/protege conflict.

While Barney doesn't bring avant-garde filmmaking to the multiplex, one can see the influence of other filmmakers, particularly Stanley Kubrick (the Cloud Club bar recalls the ghostly bar of "The Shining"). His production values achieve spectacular visual effects and his music ("Cremaster 3" is devoid of dialogue for all practical purposes) is carefully chosen and integral to the effect (I particularly enjoyed the metronomic riff of "The Order" which gives it the air of a wacked out game show). With his Irish jigs, Masonic influences and Houdini references, Barney would seem to have advanced upon the aural explorations of English singer/songwriter Kate Bush.

"Cremaster 3" is sure to be the most uniquely challenging and mind-blowing filmic event of the year.

Boise, Idaho bred filmmaker Matthew Barney began his ambitious "The Cremaster Cycle" with "Cremaster 4" in 1994 and completed the five-part work in 2002 with "Cremaster 3." The latter entry in this cycle takes place in the under-construction Chrysler Building in New York City but brings elements from others of the cycle, including the undead Gary Gilmore, plus some new additions, like a demolition derby involving five 1967 Chrysler Crown Imperials.

"Cremaster 3" is an incredibly involved tome that, at about 3 hours long, requires the undivided attention of the viewer as it begins with Celtic mythology then follows a female corpse (the undead Gary Gilmore from "Cremaster 2," played here by actress Nesrin Karanouh) digging out of a grave only to be put into the back seat of a vintage Chrysler, the target for the cement-clad five Imperials. The ongoing destruction derby segues to the Apprentice (Matthew Barney) as he fills an elevator car with concrete to create an ashlar, a symmetrically hewn stone used in Masonic ritual. The action moves to the Cloud Club bar in the Chrysler Building where the bartender (Terry Gillespie) loses control of his station and must play the out of control taps and spigots like a bagpipe as a woman (Aimee Mullins) cuts potatoes with the blades on her shoes and stuffs them under the foundation of the bar. The bizarreness continues with an elaborate game show at the Guggenheim Museum and a peach-color clad Scotsman interacting with dancers in a chorus line then with a sexy she-lion (again, Aimee Mullins).

As you can tell from my "description" (and there is much more coming from the mind of Barney - see Laura's review for more details), "Cremaster 3" is not a linear story with the traditional beginning-middle-end. It is a surrealistic adventure that is an integral part of the other four works in the cycle that may cause some confusion for the uninitiated.

This strange stream of consciousness from the filmmaker is going to require time and more than a few brain cells by the viewer. But, Barney's talented eye, spectacular imagery, outrageous sets and a bevy of high kicking Rockette types will give you lots to munch on mentally. "Cremaster 3" should come with the warning "For serious film buffs only!" It is definitely an acquired taste and will require a commitment by the viewer, but if you are of stout heart and have an open mind there is plenty to peak your interest. Casual viewers beware.