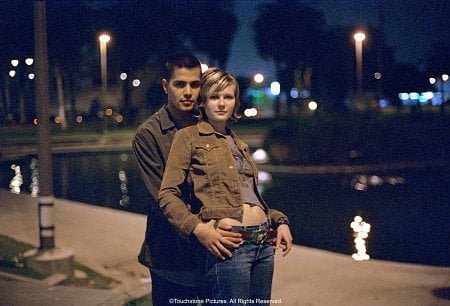 Rich girl meets poor boy and they fall into star-crossed love. This has been the staple of movies and song for decades and the question usually is: is he good enough for her? Director John Stockwell does a 180 on this theme in a story about rich, troubled Nicole (Kirsten Dunst) and poor, intelligent and hard-working Carlos who find love together, but now the question is: is she good enough for him in "crazy/beautiful"?

Nicole Oakley (Kirsten Dunst, "Bring It On") is the troubled, substance abusing daughter of a Congressman who attends high school in upscale Pacific Palisades. While performing community service cleaning the beach as payback for a D.W.I. conviction, Nicole's harassed by a group of Latino teens from a poorer part of town, but one of them, Carlos Nunez (Jay Hernandez), catches her eye. The good looking, polite young man also attends her high school - by travelling on public transportation for two hours each way, each day - because he wants a good education in order to attend Annapolis. These two are "Crazy/Beautiful."

Will the wild, rebellious girl drag down the fine, upstanding young man or will he snap her out of her self-destructive streak? "Crazy/Beautiful's" conflict resolution is too pat in Phil Hay and Matt Manfredi's ("Bug") script, but the two leads make the film somewhat engaging.

Of course, first you'll need accept that straight arrow Carlos would give a second glance to a girl who's usually drunk, gets him into detention at their second meeting, dances provocatively through the streets of his neighborhood, tries to bed him within view of her own father (who mistakes him for their housekeeper's nephew) and is disapproved of by his entire extended family. Once we're over this little hump, the filmmakers back off to show more of Nicole's free spirited, artistic side as well as the root of her problems.

Congressman Oakley takes an interest in the boy who wants to go to Annapolis and offers to sponsor him. Carlos unbelievably misses his scheduled meeting with the man, distracted by a beach outing with Nicole. When the two finally get together, he's warned to stay away from the troublemaking Nicole for his own good. For some odd reason, Carlos pays more heed to Nicole's father than his own family.

Director John Stockwell ("Under Cover") may be dealing with an implausible story, but he does get some fine performances from his cast. The talented Kirsten Dunst propels herself through the film in bleary, angry, defiance gradually letting her natural radiance peak through after time spent with Carlos. She's never looked rawer, sporting the bruised, vulnerable look of Jennifer Jason Leigh. Hernandez does his best to appear initially wary, but we never get a sense of the stress he's been under that would make his character jeopardize all he's worked for. Bruce Davison does a good job as the caring parent who's at wits end. Lucinda Jenney ("Thirteen Days") is simply shrewish as Nicole's new stepmom. Taryn Manning creates a fully fleshed character as Nicole's best friend Maddy, but the script just leaves her by the wayside.

"Crazy/Beautiful" is reminiscent of Antonia Bird's 1995 film "Mad Love" which starred Drew Barrymore as a manic depressive in love with the upstanding Chris O'Donnell. While this film is a cut above that abysmal effort, it's conflict is forced and the resolution is pat.

Nicole Oakley is a pretty, troubled and troublesome 17-year old who is emotionally estranged from her congressman father and her wealthy stepmother. She is always getting into one jam after another, disdains her prestigious Pacific High School and seems destined to self-destruct. Carlos
Nunez is a poor, inner city kid who has enough smarts to want to make something of his life. He voluntarily busses himself, for two hours each way, to the same school, works very hard and has plans to attend Annapolis when he graduates. When the two meet, sparks fly, but Nicole's past and her present abuses may be too much for Carlos to handle.

"A Place In the Sun" and "Love Story" (and the classic 60's song "Down in the Boondocks" by Billy Joe Royal) come to minds with the poor boy/girl looking to the ritzy side of the tracks for love and success. "crazy/beautiful," from the original script by Phil Hay and Matt Manfredi, twists the tradition rich/poor concept around from what we normally get, with the poor kid being warned by his friends, family and, hell, even the girl's own father, that she's no good and will only drag him down.

I like the idea of distorting the old rich-girl/poor-boy yarn to show that underprivileged is not necessarily a bad thing and having the lap of luxury and all its perks is not always good.  "crazy/beautiful" starts out with the first tentative meeting between Nicole and Carlos on a sunny beach as she picks up trash as punishment for driving under the influence. Nicole is pretty, in a rather haggard way, and, with her troublemaking attitude, soon gets Carlos into hot water - repeatedly. Just why he would jeopardize his ambitious, focused future for someone who causes him nothing but trouble is a problem I have with the story.

There are other issues, too, as "crazy" Nicole is not all that whacked out.  Sure she has psychological and self-esteem problems. She drinks too much and acts irresponsibly, but I've known people who I considered "crazy" and they were a lot worse than Nicole. I kept waiting for the girl to really flip out but, except for one scene when she is awakened from a drunken stupor by the cops who pulled Carlos over as he (soberly) drove her home, this never materialized. By the end, when everything is nicely wrapped up, I was still waiting for her to explode.

The two leads make a nice looking couple but I never believed in the mutual attraction. Dunst continues to build her acting credentials and is developing into a young star. Newcomer Jay Hernandez is personable enough, but does not stand out as Carlos. The rest of the cast is little more than background noise. Taryn Manning, as Nicole's best friend Maddy, is cute, has an effervescent personality and is unceremoniously dropped from the story entirely by the half way mark. Bruce Davison collects a paycheck as the congressman dad who disdains and ignores his troubled child until, perfunctorily, they all live happily ever after in the last few minutes.  The only character that rings true to me is Carlos's mom who expressed maternal, protective volumes with just a look at her son.

"crazy/beautiful" never gets out of the shallow end of the pool with its tale of star-crossed love. It doesn't grab me, but maybe it will win over its female teen target audience.