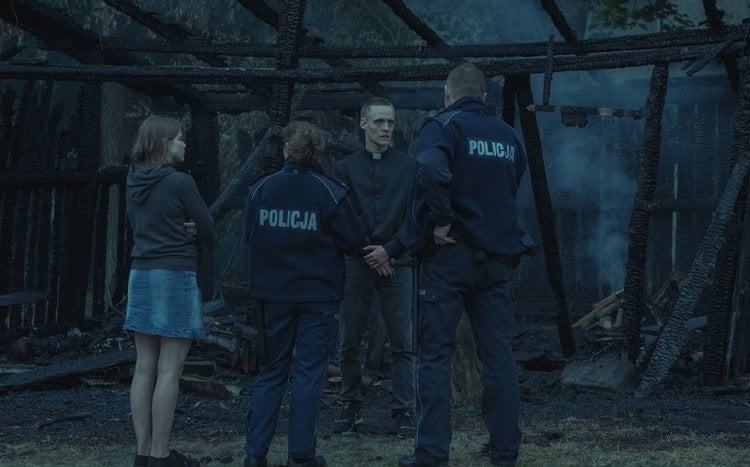 Daniel (Bartosz Bielenia) isn’t above taking part in torturing a fellow inmate in juvenile detention, but when he hears the down-to-earth, compassionate sermon of Father Tomasz (Lukasz Simlat), something changes, outwardly expressed with his pure rendition of ‘The Lord Is Our Shepherd.’ Daniel expresses interest in becoming a priest, but Tomasz tells him his record will make that impossible, instead arranging a job at a sawmill for the young man across the country. But when Daniel arrives, the first woman he runs into, Eliza (Eliza Rycembel), believes his joke about being a priest and takes him to a vicar (Zdzislaw Wardejn) more than ready to turn over the reins of a parish ripped apart by tragedy in “Corpus Christi.”

Poland’s 2020 nominee for Best International Film initially seems ripe for comedy, director Jan Komasa and screenwriter Mateusz Pacewicz eliciting a few chuckles despite the early violence. But these filmmakers have something more profound in mind as tipped off by their chosen title.

Daniel is wary about traveling to the other, unfamiliar, side of Poland and he stops short of approaching the mill, instead heading to a local club where he dances in a frenzy, his eyeballs popping from his head beneath blue strobe lights. (Shooting in beautifully composed 2.39 : 1 widescreen, director of photography Piotr Sobocinski Jr. favors the greens of rebirth accented by Madonna hued blues.) If Eliza is initially suspicious of his claim to be a priest, she surprises even him with how quickly she accepts it when he pulls a black priest’s robe and collar out of his bag. As she happens to be the daughter of Lidia (Aleksandra Konieczna), the woman who runs the local church, Daniel finds himself carefully conversing with the welcoming vicar. He’s put up in a trailer, but when he arrives for breakfast the next morning, he finds the vicar passed out drunk. ‘The vicar doesn’t drink,’ Lidia tells him, before informing him he’ll have to take over for the parishioners already lining up for confession.

This situation may sound amusing, but it is here that Daniel, who’s dubbed himself Father Tomasz, begins to show his unorthodox affinity for this calling when, after listening to a women drowning in guilt for having hit her boy, gives her the penance of taking him for a bike ride. Then he begins to dig into the mystery behind the pictorial memorial posted at the town’s border, a tragic head on collision which killed six plus the lone driver of the offending vehicle whose widow (Barbara Kurzaj) has been ostracized and whose burial has been denied within the town’s limits.
Eliza watches, amazed, as he helps folk shed their grief, but the Mayor (Leszek Lichota) wants the controversy to die down and Lidia is a firewall of hostility. Then Daniel’s recognized by 'Pinczer' (Tomasz Zietek), a former fellow inmate now working in the sawmill…

Pacewicz’s script is never obvious in its destination, his psychological profile of both the town and Daniel complex enough to absorb and distract as he arrives at the perfect conclusion. Its only real flaw may be the abruptness of Daniel’s about face, but we quickly move past that contemplating the larger issues of faith, religious service, sacrifice and forgiveness. Bielenia is perfectly cast, his cinematic face capable of appearing both demonic and angelic, the actor intensely committed. It is unfortunate that Komasa’s world class film has been denied all but a limited theatrical release in the U.S., but it will be a very special treat for those seeking something provocative during pandemic social distancing.

Ricky (Kris Hitchen) has labored hard, for others, his entire life. He finally has a chance to be his own man and buys into a delivery service franchise. However, he does not tell his health caregiver wife, Abbie (Debbie Honeywood), of his plans, which include selling her precious little car. He tells her that it is for a better, more prosperous life – or is it? - In “Sorry We Missed You.”

Most movies are an escape mechanism, something that takes you away from the grind of our day-to-day lives and put us in a better world. But, this is a Ken Loach film and his works do not put you, often, into a kinder place.

You really feel sympathy for this put upon couple and can understand Ricky’s desire, after many years of struggle and toiling for others, to be his own boss. But, his haste is based on desperation, leading him, Abby and their two kids, Sebastian (Rhys Stone) and Liza Jae (Katie Proctor), into a steady downward spiral of mounting debt, pressure from his boss (turns out, Ricky is not his own man) and increasing problems with rebellious teenaged Seb.

The story, by Paul Laverty, is a slice of blue-collar life in Newcastle-upon-Tyne in the UK and it is a hard life for a couple still trying to get out from under the fiscal burden caused in the Great Recession. You really understand Ricky’s frustration and hurt pride as every hope and grand plan he has are dashed. Abbie, on the other hand, is the glue that holds her family together, despite her ever-increasing burdens; and the kids, too, feel genuine.

I remember my first Ken Loach film (or, think it was my first) from backing 1991 with “Riff-Raff,” about the plight of London’s poor working class. I recall that film because, though in English, Loach very kindly provided subtitles for the near incomprehensible dialog. The director uses subtitles again, in “Sorry We Missed You,” and, again, I thank him.

“Sorry We Missed You” is not the kind of film that, when over, you feel good about, even hopeful. It is, though, an honest and tough story of a working class family trying to get by in a world that is against them.

"Corpus Christi" is available at the virtual theaters listed at the bottom of this page.