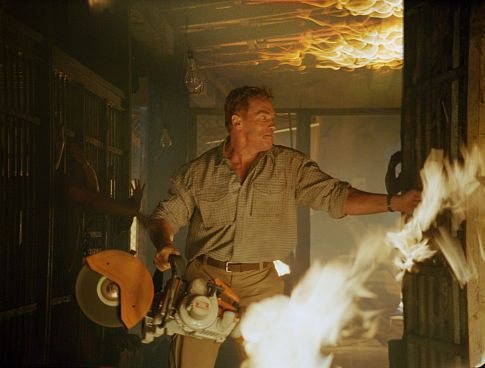 When L.A. firefighter Gordy Brewer (Arnold Schwarzenegger) loses his wife and child in a Columbian terrorist bombing, he's determined to receive justice. However, the official investigation bogs down and against the warnings of the FBI and CIA agent Brandt (Elias Koteas, "Novocaine"), Gordy takes matters into his own hands in "Collateral Damage."

Director Andrew Davis ("The Fugitive) borrows some stunts from previous films while screenwriters David and Peter Griffiths rip a page or two from terrorist thriller "Arlington Road" for this Arnold Schwarzenegger vehicle. On Hollywood hold since 9/11, "Collateral Damage" may seem slightly more relevant today, but in the end, an average action movie is an average action movie.

The U.S. Government calls Brandt's operation off, but he has a personal agenda which doesn't include vengeance for Gordy's family. Gordy's firefighting buddy Jack brings a Columbian specialist to visit, though, to give him advice like being wary of whom he asks for help. Once in Columbia, Gordy's involved in a harrowing road block which he escapes by jumping into a waterfall Richard Kimble-style. He protects a woman (Francesca Neri, "Hannibal") and her son from guerillas on motorbikes , does a stint in jail where he procures a pass and an alibi before saving everyone from fire and hooks up with a jovial Columbian drug lord (John Leguizamo, "Moulin Rouge!") who leads him to his target, El Lobo (Cliff Curtis, "Blow"). Before you can say 'Collateral Damage,' that same woman and child arrive on the scene just as Gordy's bomb is set to blow. Turns out they're the wife and child of the target, and soon they've teamed up with Gordy and Brandt in a race with El Lobo back to Washington DC.

Perhaps age has given some emotional weight to Schwarzenegger's acting, however. In the aftermath of his wife and child's death, the man appears truly shattered.

Production values are mediocre, with the fuzzy, bleached out looking cinematography of Oscar-nominated Adam Greenberg ("Terminator II") being particularly subpar.

"Collateral Damage" is the kind of action flick where the hero always has money and new clothes on hand alone in the midst of the jungle. Character actors like Leguizamo and John Turturro pop up to punch out pulpy dialogue and young boys switch paternal allegiance at the sight of broader shoulders. Its worst transgression is that old chestnut - dead villains who don't stay dead.

Gordy Brewer (Arnold Schwarzenegger) is a captain on the LAFD, has a great son and is happily married to his wife and best friend. But all this changes one day when international terrorist Claudio "The Wolf" Perrini (Cliff Curtis) brings his violent trade to Los Angeles. A bomb explodes outside of the Colombian Consulate and many are killed, including Gordy's wife and son, as they become "Collateral Damage."

Immediately after the bombing attack, CIA operative Peter Brandt (Elias Koteas) consoles the desolated Brewer and sends the firefighter home with the assurance that "we'll find this guy." But, as the weeks pass, there is no progress in bringing the killer to justice and Brewer realizes that he must take the matter into his own hands. He seeks out information about traveling into civil war-torn Colombia and arrives, with only his passport and some money, to find his family's murderer.

During his quest for revenge, Gordy is aided and abetted by a variety of folks, including an expatriated Canadian mechanic named Sean Armstrong (John Turturro) and a likable cocaine producer, Felix Ramirez (John Leguizamo). He also crosses paths with a young mother, Selena (Francesca Neri), and he adopted son, Mauro (Tyler Garcia Posey), and the task of protecting them, as he could not with his own family, takes on a level of urgency even greater than finding the Wolf. Gordy's protective nature prevents him from finding his nemesis and he learns that the killer is en route to Washington, DC, for another attack of terror.

Director Andrew Davis, whose "Under Siege" and "The Fugitive" propelled him to the director A-list, does a straightforward job with the routine action of "Collateral Damage." The story, by Ronald Roose (and screenplay by David Griffiths and Peter Griffiths), is timely, following the events of 11 September, and will draw an audience on that fact, alone. (The film was scheduled for an October 2001 release but was postponed, until now, after that terrible September day.) There is not much new in this latest actioner and the story-telling proceeds at a steady, predictable pace. One thing that is unexpected is not once does Gordy pick up a gun, despite the frequent opportunities presented by the bad guys. This is quite a departure from the usual Arnold fare. Don't worry, though, there is gunfire and explosions galore in the flick's many action scenes.

While I doubt that Schwarzenegger will ever get an Oscar for acting, he does a decent job of playing the tortured, revenge-seeking Brewer, a man who lost everything he cared about in that fateful explosion. Arnold is getting a bit too old for his trademark action flicks and the former Mr. Universe is moving a little slower these days. He does get to emote here, something we don't often see from the action icon. Early on, after the disaster has taken his family away, Arnold shows the tragic emotion of his loss and, believe it or not, he is convincing in his grief. This bit of thesping becomes overshadowed by the escalating action of "Collateral Damage," but, still, there is dimension to the character Gordon Brewer.

The filmmakers have surrounded Arnold with a bevy of veteran character actors filling in the space around the star. With his swarthy, generic looks, Cliff Curtis plays the Colombian terrorist, Claudio "The Wolf" Perinni, with a bit more depth than the usual bad guy - we learn that he also suffered a tragic loss similar to Gordy's, giving a human face to the monster. John Turturro and John Leguizamo have the most fun and the most chewable lines in the movie. Dialog like "Don't be such a sour Kraut" are done for the laughs and helps to lighten things up once in a while. Unfortunately, both actors have only cameo-level time on screen.

Italian beauty Francesca Neri, as the object of Gordy's protection and the wife of the Wolf, gives a flat perf until the film's twists start to kick in. Elias Koteas is relegated to delivering the clichéd lines, "You can't negotiate with terrorists" and "Justice for your wife and son is not a priority right now." Is he a good spook or a bad spook? It's hard to tell. There is a plethora of other vets cast in small roles, Miguel Sandoval ("Blow") for instance, who are not given much to do but are fine in fleshing out their lightly drawn roles.

Techs are in keeping with the scope of the movie, although there were times when the film stock looked very fuzzy and washed out. I suspect it is a print problem with the copy I watched since I don't expect a high profile film to get out of the editing room with such poor quality pieces. I hope it is just a onetime aberration.

The routine telling of "Collateral Damage" goes by the numbers and reps decent action entertainment - until the silly showdown ending that forces the viewer to totally suspend disbelief in a way that is a real affront to my intellect (the little that there is). The implausibility of the finale really does screw things up and is responsible for forcing me to drop my grade.