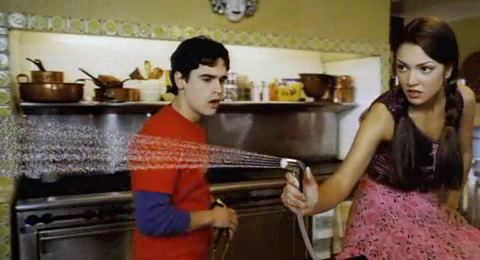 A man in a wig and fake beard stomps through an airport trying to get a flight to Costa Rica. He has a bundle of cash and bribes a guy to sell him his ticket on the next flight out. Just as he boards the plane to escape whoever is chasing him, he is pulled by unknown forces through the airport into a waiting van. Suddenly, Dr. Earl Dopler (French Stewart) is instantly surrounded by sinister types, led by the even more sinister Henry Gates (Michael Biehn), and they want his scientific expertise to perfect his invention, a device that can speed up the holder to such a state that time almost stops.

Zak Gibbs (Jesse Bradford, "Bring It On") is frustrated trying to get his dad's attention in order to buy a car. Dr. George Gibbs (Robin Thomas, "The Contender") is an eminent scientist and teacher who thinks his son is wasting his potential. When one of his former students, Dr. Earl Dopler (French Stewart, TV's "Third Rock from the Sun"), consults Gibbs Sr. on a molecular acceleration project, he unwittingly places the Gibbs family in danger in sci-fi director Jonathan Frakes' ("Star Trek: Insurrection") Nickelodeon production "Clockstoppers."

This likeable adventure flick is a betwixt 'n' betweener - too heavy for grade-schoolers who'll miss references to Black Ops yet too illogical for adults who'll find fault with the way the hyper speed mechanics play out. "Clockstoppers" may find a niche audience with the twelve to fifteen crowd.

The film starts on a questionable note as a disguised Dopler tries to evade the evil corporation who are holding him by breaching security onto an American Airlines flight. Henry Gates (Michael Biehn, "The Terminator") is hoping to use Dopler's invention, a watch that enables its wearer to go into hyper speed, for nefarious purposes. There's a problem Dopler needs Gibbs' help with, though - extended use causes accelerated aging. Gibbs, seeing only altruistic uses such as surgery between two beats of a heart, is excited to work on the project, but leaves the watch in his lab to attend a week long conference. Of course Zak, who has dad fix up gadgets so he can sell them on eBay, gets his hands on the watch and stumbles into its awesome feature. This helps him win over new girl in town Francesca DeLaCruz (Paula Garces, "Dangerous Minds"), get revenge for past grievances and turn his best buddy Meeker, (Garikayi Mutambirwa, "Bones") into a crowd winning hip hop artist.

Naturally, screenwriters Rob Hedden, J. David Stem and David N. Weiss have more up their sleeves than mere fun so Zak and his dad gradually come to a new respect and understanding when Dopler welshes on saving his mentor from the evil Gates (could they have chosen a more obvious name?) and Zak steps in to save the day - blood over brains, if you will.

Frakes spends too much time laying the groundwork for his adventure, but once that's finally done, "Clockstoppers" coasts along on Bradford's puppyish charm and a few interesting effects. Once Zak's figured out the workings of his watch, he brings Francesca into hyper drive. They figure out that things around them haven't stopped by observing a bee whose barely buzzing wings suggest that it's Zak and Francesca who are moving extraordinarily fast (making the film's title a bit of a misnomer).

Garces is a fresh face who's well paired with Bradford to give the film a chaste romantic spark. Thomas is believable as a highly intelligent man lost in his own pursuits and disappointed by his son's refusal to join him. Stewart, well made up to look haggard and older, resembles the professor from "Gilligan's Island" far more than his familiar goofy TV alien. This Gibbs family is filled out by Julia Sweeney ("It's Pat") as an every-Mom and Lindze Letherman ("Bicentennial Man") as younger sister Kelly. The bad guys, including Biehn, are all generic automatons.

Technically, the film is uneven, with cheesy lighting in the initial scene and aging makeup applied to Thomas that's as fake looking as Stewart's is real. A town square, perhaps an homage to "Back to the Future," is overused, suggesting a budget drastically smaller than the earlier time travelling flick's.

"Clockstoppers" isn't exactly a waste of time, but it's far better suited to a Saturday morning TV slot than a big screen outing.

Next thing we know, we're following young Zak Gibbs (Jesse Bradford) on his bicycle as he stops by the university where his dad, George (Robin Thomas), teaches applied physics. Zak wants him to cosign for a loan to buy a cherished vintage Mustang, but dad is preoccupied with attending a conference in a nearby city. Angered, Zak criticizes his father for caring more about his students than his own kids and the two part ways with the rift between them unresolved, but not before Zak takes a watch that his dad was tinkering with. The watch, it turns out, was sent to George by a former student, none other than Earl Dopler.

When Zak is able to finally convince a beautiful new student from Venezuela, Francesca (Paula Garces), to give him a chance, he is roped into helping her clean the yard. He fools around with the watch and next thing you know, time appears to come to a halt. He and Francesca have some fun with the new toy, but, unbeknownst to them, the bad guys are after the special timepiece and the chase is on. To further complicate matters, Gates has also taken Zak's dad hostage to work on the anti-aging algorithm that will make the device an unbeatable military weapon. Not only does the young couple have to save the world, they have to save George, too.

"Clockstoppers" turns out to be a surprisingly well-made and entertaining young teen flick that plays fast and furious with an action packed story, slick F/X, likable young leads and decent supporting characters. Helmer Jonathan Frakes (whom most folks know as Commander William Riker on TV's "Star Trek: The Next Generation") does a solid job of mustering his cast and crew in an effective manner that will hit the teen audience demographic squarely. (I was bit concerned to see the publicity machine pandering to a far younger aud at the screening I attended - make no mistake, this is a movie for older kids and teenagers, what with its sinister element and ruthless bad guys.)

The time-slowing effects are very cool to watch and, if you can forgive the liberties the filmmakers take with the laws of physics, they will please the eye. Discerning adults who are sticklers for accuracy in science fiction - for instance, if you are, physically, moving at such a rate as to be invisible to mortal beings, could a car also operate at that speed? And, what would a car chase look like if the people were operating at hyper speed? But, this is not a movie to be studied for its accuracy, it should be seen for its entertainment.

The young leads, Bradford and Garces, are easy to like and have personality enough to be heroes and good role models for the intended audience. The two actors, and the feel of the story, bring to mind Matthew Broderick and Ally Sheedy and "War Games." Bradford is hip and clever enough to appeal to the teens and Garces is pretty enough to catch the hearts of the boys out there. The supporting cast of adult players helps to fill out the background characters and give the film some depth. French Stewart as the put-upon scientist doing the will of the evil Gates (is the name intentional?) has a pissed off sarcasm that fits Dr. Dopler's personality perfectly. Thomas, as dad, though in a thankless role, does a pro turn as a parent who realizes his boy has become a man. Julia Sweeney, as Zak's mom, gets a few chuckles as a frozen TV dinner kind of mother who believes that scooping the contents of Hungry Man dinners into bowls gives it that home cookin' feel. Michael Biehn does not do his career any good in the routine role of the head bad guy, but I guess someone has to do it.

"Clockstoppers" doesn't try to pretend to be science fiction but utilizes the sci-fi elements of the story (by Rob & Andy Heddon and J. David Stem & David N. Weiss) to entertain the eye and the mind. Not for discerning adults, but older kids and teens will have a good time.