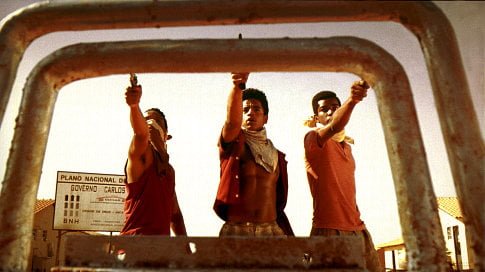 Violence and drugs. These are the two elements that dictate life in the Rio de Janeiro slum world in the 70's. But the denizens of this forbidding land must not mistake which is which. To survive one must be willing to use the former to sell the latter - or die. Helmer Fernando Meirelles brings us into Brazil's urban underworld where a teenage boy will have a life expectancy of just a few more years in the "City of God."

A knife is honed against a rock. Music fills the air. A barbecue grill sizzles. A panicky chicken watches his brethren being plucked and makes a mad dash for it. The beginning of the film is the beginning of the end of a three decade history behind the breeding of drug lords who rule the Rio neighborhood slum known as "City of God."

Tyro director Fernando Meirelles's dazzling, multi-storied epic gives a wide-angle view of the same violent and hopeless life captured over two decades earlier in Hector Babenco's Sao Paolo microcosm, "Pixote." Braulio Mantovani took on the daunting task of adapting Paul Lins' 700 page, 352 character novel and shaped it by focusing on the character of Rocket, an observant aspiring photographer not unlike the novel's author who acts as the film's narrator.

The story is broken into three decades and further broken down, via title, into various story threads which loop forwards and backwards and cross over each other. In the 1960s, Cidade de Deus was a government housing area for the homeless on the non-tourist side of Rio de Janeiro's Sugar Loaf Mountain consisting of two room bungalows with no electricity and roads of red clay. A young Rocket (Luis Otavio) tells the tale of the Tender Trio, consisting of his older brother Goose (Renato de Souza), Clipper (Jefechander Suplino) and leader Shaggy (Jonathan Haagensen). Not content with robbing gas trucks, Shaggy listens to Lil Dice (Douglas Silva), a kid with a plan for robbing a motel and an underlying, more heinous agenda.

The 1970s find City of God growing upwards, its bungalows living in the shadows of multi-story buildings, its streets narrower. Lil Dice has grown up and renamed himself Lil Ze (Leandro Firmino da Hora), an ugly ruthless drug dealer who kills off his competition but protects local shopkeepers from robbery. (Lil Ze's ascendence is brilliantly and economically told in a montage of scenes (edited by Daniel Rezende) which dissolve into and overlap one another titled 'The Apartment.') His best friend Benny (Phellipe Haagensen) is his unequal partner who becomes known as the 'coolest hood' in Ciudad de Deus. Benny, a 'make love, not war' type, decides to leave with girlfriend Angelica (Alice Braga) and his farewell blast breeds the events that will being Lil Ze's downfall in the early 1980s.

The neighborhood is now crowded squalor connected by dense alleyways. Lil Ze has made a powerful enemy in Knockout Ned (Seu Jorge), a handsome, good man provoked over his girlfriend's refusal to dance with Lil Ze. Rape, murder and rampant destruction must be revenged, so Ned partners with Lil Ze's competition, Carrot (Matheus Nachtergaele), and an all out war ensues. Rio's corrupt police keep the wrong man in power, but the runts, a ragtag group of heavily armed eight to ten year olds, have a score to settle with Lil Ze.

Meirelles uses cinematic tricks and styles from films as disparate as "The Matrix" to Spike Lee's "Clockers" to tell his tale. He shifts from one decade to the next in one 360 degree camera move. He stops for a character's mini-story "Run Lola Run" style, before returning to his main action. Cinematographer Cesar Charlone's camera flies on a bullet's path or seemingly on the tail feathers of a terror-stricken chicken. Death comes between the strobe lights of a disco like the murder in "Looking for Mr. Goodbar." Gangs move herky-jerky through the streets in sped up fashion like a deadly serious version of "Lock, Stock and Two Smoking Barrels."

Codirector Katia Lund was Meirelles's link to the real favelas of Rio and together they workshopped neighborhood kids for eight months to distill their cast. The results are incredible, the performances too myriad too mention. Art director Tule Peake attains three decades of the evolution of a district beginning with the red palette of dawn and sepia toned nostalgia and ending in the steely gray light of war-torn streets. Original music by Antonio Pinto and Ed Cortes also charts the eras. Mantovani's screenplay gets at the essence of how a 'life is cheap' mentality is created by a society which sweeps its unfortunates under the rug to foment their own pecking order. However, with so many stories being told, "City of God" doesn't deliver on the emotional level of the superior "Pixote." Still, "City of God" is an astounding debut for Meirelles, a director who clearly understands the art of collaborative filmmaking. And that chicken? You'll have to see the movie to learn his fate.

Meirelles, working with the adapted screenplay by Braulio Mantovani of the powerful novel by Paulo Lins, takes us into a world rarely seen. Cidade de Deus, a housing project for Rio's urban poor, was built by the government in the 60's as a dumping ground for the city's troubled, violent youth. But, as organized crime and drugs made inroads into the City of God, as it was ironically dubbed, it became one of the most dangerous spots in the country. It wasn't the state that made the laws ruling the City, it was the teenage drug lords that ruled the turf, using violence and the threat of instant death as their law.

The narrator/observer in the neighborhood, or favela, is Rocket (played in the 60's portion by Luis Otavio and, for the 70's and 80's, by Alexandre Rodriguez). Rocket is a good kid in a bad land and, even when he thinks he must be the outlaw, can't do the things that he must if he wants to be a successful criminal. Instead, he find solace and expression in photography and uses his talent to help break away from the life of crime dealt to most of the favela's young residents. We watch the violence and drug dealing through Rocket's eye as the landscape of the Cidade becomes more and more polarized and under the iron fist of the ruling drug barons.

Which brings us to Li'l Dice (Douglas Silva), a kid the same age as Rocket but with a mind set that is as far opposite the budding photographer's as can be. Early on Li'l Dice gets a taste for violence and, at the tender age of twelve, develops a penchant for killing. The youngster knows that a life of crime is his for the taking and, by the time the 70's roll around, has established himself as a potent force in the City. He changes his name to Li'l Ze and takes over the lion's share of the favela as a ruthless, murderous drug lord, mustering a small army from the young male population. Li'l Ze and his young horde rule their favela with brute force and a willingness to kill indiscriminately, which leads to a confrontation with Knockout Ned (Seu Jorge).

Knockout Ned is an upstanding member of the favela, working as a money taker in the transit system. He has an innate sense of honor and eschews the crime scene of the hood. But, when Li'l Ze and his gang brutally rape Ned's girlfriend a vendetta is formed and the film builds to its climax. Knockout Ned recruits Ze's rival gang leaders with the intent of exacting vengeance on his nemesis. A war ensues in the 'hood and good guy Ned becomes as ruthless and violent as Li'l Ze. The battle between the gangs, with its take-no-prisoners policy, erupts to devastating effect. The story ends with the herd thinned out and a new breed of young drug lords moving into place. What goes around comes around in "City of God."

This is a remarkable and no small feat for Meirelles and his cast and crew. The filmmakers decided to forego using professional actors and they scoured the very area where "City of God" takes place to find the boys to play its characters. Starting with a cast call of over 800 kids from the favelas the makers took months to whittle the number down to 400, then to 200 before the cameras ever began to roll. The careful work to garner convincing performances from the young, amateur cast pays off, giving the film a documentary-like, real feeling film that thrusts the viewer in the midst of a world where life hangs on a whim.

Meirelles and scripter Mantovani take Paulo Lins's 800-page novel and change it from its character narrative to a period telling than spans decades. With so many characters and personalities involved, the filmmakers could have lost their way. Instead, they focus, mainly, on a few important individuals that personify the period and the place and give the viewer a vested interest in what happens to the players. The performances garnered from the young cast belies their inexperience, giving the film a realistic, gritty look that puts you right in the middle of the tough action.

In the City of God youth and innocence are mutually exclusive factors where survival is maintained at the point of a gun and the willingness to use it. The kids are not morally corrupted, since this would mean they were innocent to begin with. Instead, the boys that make up the underworld of the City are adults by age nine, mature leaders at 16 and dead at 20. They are the penultimate examples of the saying, "Live fast, die hard and leave a pretty corpse" except the bullet riddled body of a 13-year old gang banger is not an attractive thing to see.

The makers of "City" are strongly influenced by other film artists. You can see, with the abrupt shift from normal motion to fast and back to normal, the inspiration of Guy Ritchie's "Lock, Stock and Two Smoking Barrels" in the visuals of the film. The camera work, by Cesar Charlone, is always on the move and vigorously follows the action of the key characters. The locations, in neighborhoods much like the Cidade, lend the film the realistic feel that makes you forget you are watching a movie.

"City of God" takes you to a place that has only been explored in such harsh films as Hector Babenco's "Pixote" and the cult flick "The Harder They Come." It makes no bones about the established violence that dictates life in the favela, but offers a ray of hope for some in the story of Rocket and his efforts to legitimately escape the horror of day-to-day life in the Cidade. It may not be a pretty sight but it is a compelling one.