The Children of the Century (Les Enfants du Siecle) 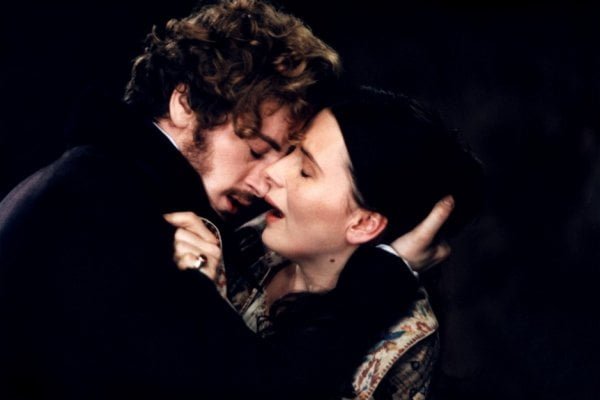 Avant-garde 19th Century authoress and bon vivant George Sand (Juliette Binoche) sets Paris society afire when she takes Alfred du Musset (Benoit Magimel), a poet six-years-her-junior, as her lover. Their tempestuous romance spanned years but happiness for them is only fleeting in "Children of the Century."

In 1830's Paris, an environment of rich in artistry and hedonism, George Sand (Juliette Binoche, "Chocolat") gives a public reading of her second novel, 'Lelia,' declaring that it is easier for a man to accuse a woman of frigidity than to give her pleasure. This scandalous notion brought the mannishly attired Sand many detractors, but also intrigued a very important admirer, 23 year old poet Alfred de Musset (Benoit Magimel, ("The Piano Teacher"). Their impassioned affair ended, but haunted each for the rest of their lives, inspiring not only their own books on the subject, but several other perspectives from their contemporaries. Diane Kurys ("Entre Nous") brings their romantic excesses to the screen in "Children of the Century."

Juliette Binoche and Benoit Magimel embody amour fou is this lush epic period romance. While audiences have experienced Sand's later romance with Chopin in films before (as in "Impromptu" with Judy Davis and Hugh Grant), director and cowriter (with Francois Olivier Rousseau and Murray Head) Kurys was inspired to find the truth of Sand's earlier, more commented upon relationship in her and Musset's' letters.

The free-spirited Sand was a 29 year old married (albeit separated) mother of two when she met the moody poet, who initially denied his own attraction to the notorious writer, declaring them the best of comrades and colleagues. His mother Madame du Musset's (Marie-France Mignal) strong disapproval of the partnership, combined with Sand's gift of the abandoned play that would become Musset's 'Lorenzaccio,' gave the couple the pretense of a research trip to Italy. However, immature du Musset was unable to cope with Sand's illness on their arrival in Venice, so he debauched himself while she was tended to by Doctor Pagello (Stefano Dionisi, "Farinelli").

Once on her feet, Sand's work ethics clashed with Musset's, who continued his whoring and opium use to the point of near death. Distraught, Sand once again enlists Pagello's help to save Musset, but in so doing, Sand falls for the handsome doctor. Musset returns to Paris and pretends to love another, but correspondence keeps his love for Sand alive. She returns to Paris (with Pagello), but soon Sand and Musset are back in each others arms for one more disastrous go-round.

Binoche gives one of her best performances as the grounded but daring writer. Her self-abasement in the path of her youthfully arrogant lover is believable because Binoche so clearly establishes the sexual pull between them ('it's still happening,' she wondrously whispers during a lovemaking scene). Magimel is her equal in the far less sympathetic role of Musset, a cosseted young artist who meets the love of his life before he's ready to settle. Magimel takes Musset from the tenderest of lovers to arrogant disregard, outright lunacy and back again. Dionisi is handsome and shows compassion, but is overshone, rightfully so, by Binoche and Magimel's passionate playing.

Kurys shows confidence in both her material and her production. The film is sumptuous looking. Art director Maxime Rebiere ("Queen Margot") creates both humble and lush exteriors, befitting her Paris, Venice and countryside locations. Vilko Filac's ("Time of the Gypsies") camerawork is both intimate and painterly. Designer Christian Lacroix, whose work is hilariously commented upon in the British TV series "Absolutely Fabulous," proves more than capable creating period costume both lavish and restrained in his first film outing.

"Children of the Century" will stand as one of the best films that showcase a romance within the context of an artistic movement.

Director Diane Kurys takes the life story of the famous feminist French author, nee Aurore Dupin, who took on the moniker of George Sand, and gives it a very different view from previous biographical pics about Sand that concentrated on her relationship with composer/musician Chopin, her most famous fling (See Judy Davis as the author in 1990's "Impromptu"). Instead, the tale of her passionate, tumultuous affair with Musset unfolds as Sand's masculine persona, with its love of life and beauty, takes form.

Binoche captures the screen with her presence as George within minutes of the opening of "Children of the Century." We see Sand, decked out in man's regalia and smoking her trademark cigar, comfortable in her dress and the notoriety it spawns in Parisian social circles. Later, she transforms into a beautiful, sophisticated lady who attracts the amorous and intellectual attention of Alfred, sparking a romance that travels from Paris to Venice. Their story tells of two worlds colliding as George wants to enjoy life while Alfred takes on a self-destructive nature as befits a young man living in those troubled times in France. The two stars own the film.

Supporting cast is more background than active in the story but the filmmakers take pains to utilize these scenery-bound characters to good effect - especially in one scene, when George and Alfred form a romantic union a second time, she is spurned at a dinner party by a pair of gossiping matrons. This attention to secondary details helps make the film richer and more complete.

Techs are fitting for the period nature of the story. Production and costuming give a modern flair to Sand's biographical slice of life that shows the characters as beings that are all too human. Ample use of both author's writings helps to give dimension to George and Alfred.