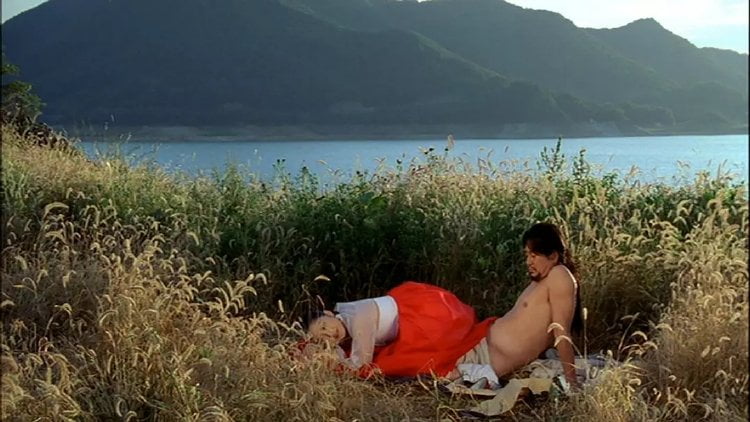 "Blue is more than the indigo it is made from, but without the indigo there would be no blue." This statement about artist and art is the heart of director Im Kwon-Taek's telling of the life of Jang Seung-up (Choi Min-Sik), a crude and uncultured man who became the shining light of the late 19th century Korean art world. This brilliant and talented man broke new ground with his work amidst the turmoil of political change and his story is told in "Chihwaseon."

In late 1800's Korea significant artists, all schooled intellectuals of the time, curried favor with Government officials in hopes of the ultimate commission - working at the king's palace as a royal painter. A wealthy man dared to be unconventional when he observed the clandestine works of a lowly servant who had copied, and bettered, paintings from his prized collection. That man's recognition of raw talent uncovered one of Korea's greatest artists, Jang Seung-up (Choi Min-Sik), whose outer crudeness encased a soul that produced "Painted Fire."

Writer/director KwokTaek Im ("Chunhyang") won Best Director at Cannes 2002 for his unique historical record that resists the clichés biographical movies about art can so easily fall into. He begins his film in the middle, with Jang Seung-up at the height of his fame in 1882, giving a lesson at his old school. Teachers and students marvel at how the artist manages to both follow and break the rules of technique he was taught. Then, in a series of short scenes like brushstrokes, the director paints in the background of Jang Seung-up's past.

Jang Seung-up was a crude drunkard with a talent for spotting beauty around him. This is initially manifested by his attraction to the local kisaeng (a type of Korean geisha) and his devotion to his boss's sick younger sister. The artist's women were the recipients of some of his most priceless works, which they attained through manipulation or homage. But Jang Seung-up was a conflicted man whose talent provoked a wanderlust which denied domestication (in fact, the artist in his older years eventually vanished without a trace).

Unable to be pinned down by women or even his own king, Jang Seung-up alternated his great works with commissioned 'bird and flower' paintings, the commercial art of his day, yet he disparaged the art stars of the time, who included poetry which explained the visuals, as mere 'dabblers.'

Kwon-taek Im's greatest achievement is his visualization of the emotion of art over the intellect. Rather than resort to a parade of pretty pictures (although "Chihwaseon" certainly has moments of great beauty), the director presents the simple moments that move his subject, internalizations which Choi Min-Sik very capably emotes, and which we, the audience, also respond to. Later, we will be able to experience the same event through the artist's eyes when it appears through his work. The grandest example of this is when a huge flock of birds takes over the landscape, a breathtaking scene which reappears in an oversized banner painting.

The film's final scenes find the artist an old man, wandering in destitution after the Rebel's Revolt and Peasant's Revolt which shattered Korea. He finds beauty still, meeting up once more with a chastely beloved Kisaeng and in the more humble setting of a pottery business where he seeks work. "Fire dictates all," Jang Seung-up notes to the owner at his kiln and Kwon-taek Im ends his film with a startling and apt allegory.

I couldn't help getting the impression that filmmaker Im had seen the American film "Pollock" before starting production on "Chihwaseon." The parallels between Jang Seung-Up and Jackson Pollock could be coincidence - i.e. all brilliant artists get drunk, introspective, belligerent, suicidal, self-abusive, self-destructive, arrogant and morose - or intentional, as I think.

In addition to the depiction of the artist, his life and his work, the film gives a real sense of the politics at the time as the Korean monarchy is threatened by Reformists, a Japanese-backed movement to oust the royals from power in 1884. This highhanded attempt by the Japanese to create a puppet government was followed by the Peasants Revolt in 1887 that brings down the whole feudal system. In that new socialist world patronized artists like Jang Seung-Up become outcasts in their own society.

Choi Min-Sik gives a powerful performance as the volatile artist and is convincing whether with brush in hand or a draining a bottle of rice wine. The actor has a presence that is reminiscent of the great Toshiro Mifune and holds center stage effortlessly. His depiction of the volatile Jang brings out the self-destructive aspect of the artist who would rather destroy his own masterpieces than see them fall into the hands of those he considers unworthy.

Production credits are uniformly high quality. Cinematographer Kim Il-Sung has a painter's eye as he composes his shots in a form that compliments the artwork under his scrutiny. Art design by Joo Byung-Do creates a believable world of 19th century Korea as the winds of change blow through that country. Costume design by Lee Hye-Ran is superb on a number of levels, contrasting the dark, somber clothes of Jang with the crisp white "uniforms" of the court artists. The techs are definitely up to par for this epic story about a legendary man.

"Chihwaseon" is also a mystery explained as we come to find out that, after his fall from grace and artistic prowess, Jang Seung-Up disappeared without a trace. But, rather than leave us with an ambiguous finale, helmer Im Kwon-Taek and co-writers Kim Yong-Ok and Min Byung-Sam have created a sudden, plausible end to the artist's story that is shocking, though not entirely unexpected.

There have been a number of fine and varied films coming out of South Korea lately and "Chihwaseon" is a good combination of content and character. And, it explores the life of a brilliant artist virtually unknown in the West while effortlessly teaching us about a tumultuous period in Korea's past.