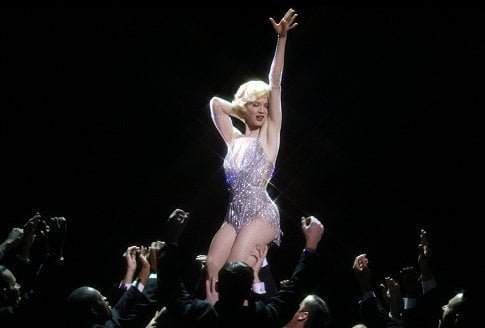 Roxie Hart (Renee Zellweger) dreams of becoming the star of a jazz revue and watches in awe as Velma Kelly (Catherine Zeta-Jones) performs the Kelly Sister act solo before being arrested for the murder of her husband and sister. Later that night, when cheating Roxie discovers her lover Fred (Dominic West, "Rock Star") lied about his show biz connections to get into her pants, she shoots him dead and tries to get her husband Amos (John C. Reilly,"Gangs of New York") to cover for her. But Roxie finds herself a bigger star than she'd ever imagined as an imprisoned murderess under the tutelage of hot shot lawyer Billy Flynn (Richard Gere, "Unfaithful") in the long awaited film version of the Bob Fosse Broadway musical "Chicago."

"Chicago" has lots of entertainment value but of the vaporous kind. The movie is structured like "Cabaret," with musical numbers commenting upon the action and establishing character motivations, but where that musical had sweeping scope and rich characterization, "Chicago's" numbers have but a simple story peopled with shallow, unsympathetic characters to comment upon.

As Velma's star wanes in the slammer, Roxie is soon working the press as a Midwestern innocent seduced by big city vice. She milks loyal Amos for the $5,000 which Flynn commands and taunts Velma for her reduced newspaper coverage. When Roxie's about to overreach her influence, she's brought back down to earth by the hanging of an innocent woman, then dismayed when vicious socialite Go-to-Hell Kitty (Lucy Lui) grabs both Billy and the press's attention. Manipulative Roxie works the gathered crowd by fainting and claiming impending motherhood, regaining both headlines and Amos's devotion.

The five top-billed stars all get their shot at a solo, but only Zeta-Jones need think of quitting her day job - in fact she's a revelation both as a singer and a Fosse dancer. No one embarrasses themselves though, with Gere in particular being more adept at this kind of thing than one would imagine. Zellweger handles herself well, but is not up to the 'nothing but blackness backdrop' she's given for one number. She doesn't work the subtle flourishes that Zeta-Jones tops her moves off with and, frankly, she's too thin to be a convincing chorine. She's also hampered with a number that's too reminiscent of "Diamonds Are a Girl's Best Friend" and the superior rendition given by Nicole Kidman last year in "Moulin Rouge." Zellweger shines more as the back-stabbing opportunist of the non-musical segments.

Queen Latifah, as lady-liking Matron Morton, puts a lot of madamely oomph into "Call Me Mama," and it is unfortunate that her character becomes less prominent in the film's second half. John C. Reilly, just coming off a run from a musical stage version of "Marty," is moving as the sad clown of "Mr. Cellophane." Gere has several numbers, capped by his literal tap-dancing out of a tough spot in court. In a group number, Flynn is shown to be a puppet master pulling the strings of journalist Mary Sunshine (Christine Baranski, TV's "Cybil") among others. Zeta-Jones introduces Roxie to murderer's row with "Cellblock Tango," but she shouldn't have to share the spotlight. Her closing number with Zellweger considerable aids the latter.

Taye Diggs' Band Leader should have been more prominent, an emcee in the tradition of Joel Grey's "Cabaret" character, but choreographer Rob Marshall, making his film debut, lets him get lost in the crowd. Colm Feore is a stock bad guy as Assistant D.A. Harrison. Chita Rivera has a cameo as a judge.

Harrison paces the film well, although isn't successful transitioning Broadway into Hollywood. Production design is lacking, the film often looking like nothing more than a filmed version of the stage play. Costume design is uneven, with Zellweger's silver sequins washing her out next to Zeta-Jones's rich blacks. Gere's metallic red striped dance suit falls on the cheesy side.

"Chicago" was never one of Fosse's top musicals, depending on its stars for its dazzle. The movie version is fun while it lasts, but it covers no new ground and the only real dazzler is Zeta-Jones.

The club is hopping as Velma Kelly (Catherine Zeta-Jones) comes sauntering in. "You and your sister are on in five minutes" she is told as she goes into her dressing room, washes her blood stained hands and tosses a revolver into a drawer. She goes on stage, alone, as the police gather in the audience, waiting for her to finish her energetic song and dance number. Star-struck Roxie Hart (Renee Zellweger) watches Velma perform then runs off with a guy who says he can get her name in lights but, it turns out, not the way she thought in the city of crime and corruption, "Chicago."

First time film director Rob Marshall takes choreography genius Bob Fosse's 1975 stage musical and murder thriller and brings it to the big screen in a fast, flashy but somewhat stilted screen rendition of the popular Broadway play. The most impressive thing about "Chicago" the motion picture is the song-and-dance performance by Catherine Zeta-Jones. I have never taken to the beautiful actress in her dramatic acting roles but I was bowled over when she hits the stage with the film's opening "All That Jazz" number, singing and hoofing like she was born to it. She dominates the screen when the music plays.

Renee Zellweger should have kept the pounds that she gained for "Bridget Jones Diary" for her role as vaudeville stage wannabe and murderess Roxie. She is too skinny to be a chanteuse star but gives a game try in the dance numbers and has a not-awful set of pipes. Having the best time of all is Richard Gere as the high priced criminal lawyer, Billy Flynn, a man who has never lost a case for his female clientele. Gere camps it up as the flamboyant celebrity attorney as he pleads Roxie's case in court. The action jumps from his snowing the jury with his fast talk to Billy on stage performing a tap dance in parallel to his courtroom dance. Gere should not give up his day job to become a singing hoofer but he plays his part with gusto.

Queen Latifah, as jail matron Mama Morton, starts off with a bang in her own song and dance number, but the makers cut out a couple of more songs the character has in the stage version which, if she had those tunes, could have garnered award attention. John C. Reilly as Amos Hart is a likable schlemiel, probably too good for wife Roxie. The actor gets to excel in his one dance number, "Mr. Cellophane" about a man so unremarkable that you can see right through him.

The production is sharp, fitting the theme of murderous women with its dark, moody contrasts. The stage numbers are interesting but the film is hampered with rapid fire, music video style editing that are visually stimulating but prevent you from seeing the full scope of the dance numbers. The cameras should have hung back to give the eye the chance to see the dancers as you would on stage. The up-close, fast and furious cutting should be relegated to the short attention span of the MTV generation, not a film as ambitious as "Chicago." The fans of the stage play will, I fear, be disappointed.

"Chicago" is fun and entertaining and does well in its stylized view of the Roaring 20's. The big surprise is Catherine Zeta-Jones.