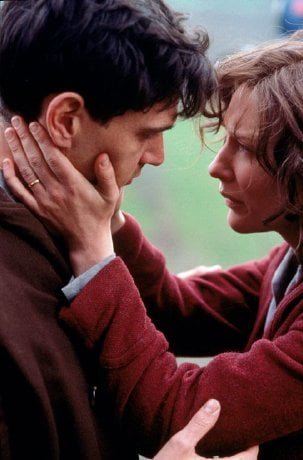 Travelling from Scotland to a job in London during the Blitz, Charlotte Gray (Cate Blanchett, "The Lord of the Rings") meets a wartime recruiter who's impressed with her fluency in French. He invites her to a book publishing party which changes her life in two profound ways - she meets and falls in love with RAF pilot Peter Gregory (Rupert Penry-Jones, "Still Crazy") and is asked to consider spying for her country. When Peter's shot down over France, Charlotte trains for and accepts a mission, hoping to find her lover in director Gillian Armstrong's ("Oscar and Lucinda") new film "Charlotte Gray."

While "Charlotte Gray" may feature Blanchett's least successful performance, Armstrong's old-fashioned wartime romance features such a high caliber of talent that it manages to maintain interest even while its heroine's distinctly unfeminist motivations induce eye-rolling.

As adapted from the Sebastian Faulks novel by Jeremy Brock ("Mrs. Brown"), Charlotte is the type of gal who so aggressively clutches her targeted male she's ready for a lifelong commitment after a hasty roll in the hay. Parachuting into the French countryside, she's met by Julien Levade (Billy Crudup, "Almost Famous"), a Communist resistance fighter with ties to the local community who's also hiding two young Jewish boys, Jacob (Matthew Plato) and Andre (Lewis Crutch), whose parents were arrested.

Charlotte proceeds to seriously botch her first job, causing her contact's death at the hands of the Nazis when she delays the woman to inquire about the whereabouts of Gregory. She then rashly contacts Julien in a panic and he sends her to his father's (Michael Gambon, "Gosford Park") farm to care for the boys. Charlotte begins to work with Julien's resistance group, but once again causes lives to be lost, this time unwittingly.

While "Charlotte Gray" can be an infuriating film at times, with its heroine who not once, but twice, travels a great distance on behalf of a man who may not be committed to her or even alive, it does feature subplots that make it worthwhile. In training, Charlotte is asked which is the most important - Faith, Love or Hope. The answer she gives foreshadows her bravest, most selfless, if foolhardy, action. The relationship between Julien and his father is complex and Charlotte's encounters with the elder Levade and two other men, her English contact Mirabel (Ron Cook, "Chocolat") and the Nazi-collaborating schoolteacher Renech (Anton Lesser, "Fairy Tale: A True Story") also spice up an otherwise bland stew.

Blanchett's accent roams from Scottish to English to nondescript and her performance here is mostly reactive. Crudup's accent is an accent, although certainly not a French one. His Julien ranges from earnest to anguished. Blanchett and Crudup's chemistry is more clash of the cheekbones than sexual spark. Michael Gambon gives the film's best performance, playing Levade like a Parisian baguette, all crusty on the outside and softly textured on the inside. His character is the one who, in the end, is the bravest and most self-sacrificing of all. Ron Cook makes Mirabel an intriguingly conflicted character while Lesser nails the snivelling opportunism and cowardice of a collaborator.