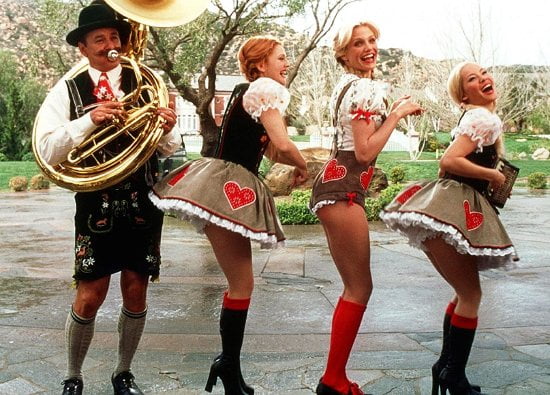 We've had "Sgt. Bilko," "The Addams Family," "McHale's Navy," "The Mod Squad" and "The Fugitive," all TV shows that became the concept fodder for movies decades later. This hit or miss proposition has produced such ridiculous dreck as "Bilko" and "McHale" and well-made big screen adaptations like "The Fugitive." Columbia Pictures gets on the remake wagon with the reprise of the 1970's TV babe fest, "Charlie's Angels," with the update starring Cameron Diaz, Drew Barrymore and Lucy Liu as Charlie's girls and Bill Murray as the ever loyal lieutenant, Bosley.

With so many big screen adaptations of old television shows falling flat, the "Charlie's Angels" project sounded dubious except for one important factor - Drew Barrymore. Barrymore is a likeable young actress and a proven producer ("Never Been Kissed") and she succeeds once again with this project.

Written by Ryan Rowe ("Tapeheads"), Ed Solomon ("Men In Black") and John August ("Go"), this "Charlie's Angels" keeps the TV show basics intact while tweaking it with good-natured tongues in cheeks. The film kicks off parodying "Mission Impossible 2" in as high-flying a manner as any Bond opening, while getting a joke in at the expense of "T.J. Hooker: the Movie." Then we're introduced to the three angels as widely different children. Natalie's (Cameron Diaz) a brace wearing, girlie girl who loves Soul Train. Alex (Lucy Liu) is a silver-spooned equestrian. Dylan (Barrymore) is a smoking-in-the-girls'-room rebellious orphanned teen.

Back in current times, the three are assembled by Bosley (Bill Murray) to get their assignment from Charlie (uncreditted voice of John Forsythe, the original Charlie). Eric Knox (Sam Rockwell, "Galaxy Quest"), a nerdy software magnate, has been kidnapped. His partner Vivian Wood (Kelly Lynch, "Drugstore Cowboy"), fingers Roger Corwin (Tim Curry) as an enemy while the Angels identify a slick flunky in the kidnapping tape as the Thin Man (Crispen Glover, "Nurse Betty"). They then begin their pursuit of the bad guy(s) masquerading as beautiful party women, belly dancers, Bavarian yodellers and office efficiency experts. They also all pursue romance - Natalie with bartender Pete (Luke Wilson, a Barrymore ex and former costar "Home Fries"), Alex with action star Jason (Matt LeBlanc, TV's "Friends") and Dylan with Knox himself (while flirting with Chad, Barrymore's new husband Tom Green) - while maintaining their covers.

The story is lightweight, but features plenty of action (all Matrix style and well exaggerated) and lots of goofy humor (slo-mo shots of hair being 'flipped'). Only Alex' romance with LeBlanc and Barrymore's indulgent inclusion of Tom Green (in an ill-conceived character) bog the film down.

Acting is fun all around with Diaz shining brightest as the excessively cheerful, completely ditzy Natalie. Liu struts her femme fatale stuff. Barrymore keeps her costars more front-and-center, yet still makes her own mark playing a woman scorned. Sam Rockwell hits broad comedic high notes in two very different modes while the ever reliable Murray settles for slapstick (and a great prison parody sequence). Tim Curry is underutilized, but fine while he's on screen. Crispen Glover resembles a deranged Steed from "The Avengers."

Costume and art direction harkens back to the mod 70's time period while still being current while effects are sometimes given a little appropriate cheese factor. The soundtrack is stuffed with everything from oldies from Jimi Hendrix to more recent tunes from Pizzicato Five. "Charlie's Angels" may seem a tad overlong at 92 minutes, but it mostly flies across the screen with good-natured giddiness.

The draw for the new, big screen rendition of "Charlie's Angels" is the built in attraction for the ready-made audience of fans of the TV show. That and, of course, the showcase for some of Hollywood's hottest female properties. Just about everyone who sees the movie will know about the show, its faceless narrator (once again, voiced by John Forsythe) and its bevy of beautiful, brilliant and bodacious babes. The Angels are three talented and athletic private eyes working for their mysterious boss and solving all kinds of complicated crimes and their latest case is no different.

Eric Knox (Sam Rockwell) is a handsome genius and founder of Knox Technologies. He has designed a voice-identification software program that is more accurate than fingerprinting. But, in the wrong hands, it could prove a worldwide disaster. When the scientist is kidnapped, Knox president Vivian Wood (Kelly Lynch) turns to the one man - and three women - who can break the case, Charlie and his Angels.

Natalie (Diaz), Dylan (Barrymore) and Alex (Liu) jump on the case and begin their investigation with Roger Corwin (Tim Curry). Corwin heads Red Star Systems, the world's largest telecommunications satellite network, and is the arch business rival to Knox. The corporate honcho is the Angels' prime suspect and the team works, first, to free Knox from his kidnappers, then foil Corwin's plans to steal and use the advanced technology for his own greedy purposes. But, after they save their client, they discover that all is not as it seems and the identity of the real bad guy takes a sudden twist, putting the lives of the Angels, and Charlie, in grave danger.

The screenplay for the new "Charlie's Angels" doesn't make any real attempt to update the original material of the TV show. Instead, the writers (Ryan Rowe, Ed Solomon and John August) give the story a 70's retro feel that captures the mood of the series. This is a help as the players in the film can anchor their perfs to the simple action/T&A template of the show without having to break new creative ground. As such, the concentration is on the usual flash and fire coupled with choreographed fights and Matrix-style special F/X.

No one in the cast is going to earn any Oscars or Golden Globe awards for "Charlie's Angels," but the actors seem to be having some fun. Cameron Diaz is almost gleeful in her portrayal of the ditzy, yet competent, Natalie. She has all of the action and Kung Fu moves down while putting a comic spin on her character. Diaz gets mileage out of scenes like her rescue of Bosley from a prison at the same time a new boyfriend (Luke Wilson) gives her a call. It's absurdist but, because of Diaz, it works.

Barrymore is cute as a button as Dylan and she, too, has good fun, especially when she takes down five of the bad guy's henchmen while tied to a chair. Lucy Liu, whom I usually find annoying as an actor, fits the action bill well as the tough as nails Alex. Bill Murray doesn't get to do too much as Bosley - kind of like in the TV show. Supporting cast is good, though mostly underutilized. Tim Curry is wasted as a maguffin used to distract the viewer from the real bad guys. Sam Rockwell gets to put an arc on his perf as Eric Knox, shifting gears along the way as the nature of his character changes. Crispin Glover gives his henchman, called the Thin Man, a silent, chain smoking twist that makes him seem like he's right out of a low budget James Bond flick. Kelly Lynch, Matt LeBlanc, Tom Green and LL Cool J are given little to do except appear on the screen.

Tech credits are solid as first-time director, named McG, puts his music video imprint on the film. Fast editing, rapid-fire camera (by Russell Carpenter) and slick production values make this a quickly paced bit of movie fluff. I have to say, though, that the 92-minute run time feels long. A short film by today's standards, it could have used some judicious editing. Things run out of steam well before the end of "Charlie's Angels," but that doesn't stop the filmmakers from setting us up for the sequel(s) just before the end credits.

Looks are more important than the plot line of "Charlie's Angels" and I guess that's how it should be. Teenage girls are the target audience and the likable action figures rep'd by the three Angels are decent enough role models. The sexy outfits they get to strut around in should be sufficient draw for the boyfriends, too. This is not meant for the more discerning viewer, though.