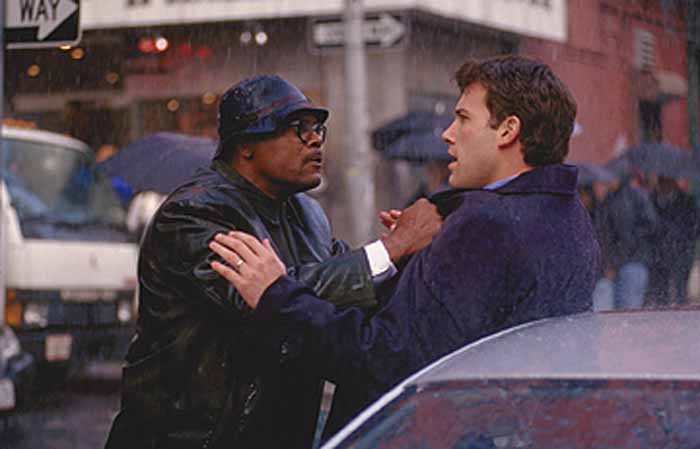 Two men. One, Doyle Gipson (Samuel L. Jackson), is at the bottom of the proverbial barrel. The other, Gavin Banek (Ben Affleck), is a high-powered young attorney at the top of his game. One day they both have important appointments to attend but fate crosses their paths and things go very wrong for each when they are "Changing Lanes."

Gavin Banek (Ben Affleck) is in self-denial about the legality of his attempt to take over a deceased millionaire's charity trust for the father-in-law who just made him a law firm partner. Doyle Gipson (Samuel L. Jackson) believes his faithful AA meeting attendance and a mortgage approval on his first house should convince his wife from moving to Portland with his two sons. Their lives will become as locked as their fenders as they both rush to urgent appointments in "Changing Lanes."

This smarter-than-average screenplay by Chap Taylor and Michael Tolkin ("The Player," "The New Age") is a cat and mouse game on the surface but is loaded with subtext about compromising ethics. Star Affleck hasn't been in such strong form since supporting buddy Damon in "Good Will Hunting."

When Banek and Gipson collide on the FDR, Gipson wants to proceed by the book, but hot shot Banek's in such a hurry, he offers a blank check instead. Gipson refuses and asks for a lift, but Banek strands him retorting 'Better luck next time.' His words will come back to haunt him.

Arriving in court, Banek discovers he mistakenly handed an all important file to Gipson and he didn't even get the guy's name. Meanwhile Gipson arrives late at a custody hearing and loses a chance to regain his family. In despair, he throws his papers, including Banek's file, into the trash and heads to the nearest bar, but resists the bourbon he orders. Once he discovers how much the file means to Banek, he retrieves it and faxes a page to Banek with 'Better luck next time' emblazoned across the sheet.

Each man's action makes the other guy go farther than he ever thought possible until the situation's completely out of control. This horrible day will force Gavin and Doyle to take a good hard look at themselves and face some ugly truths.

The screenplay gives each man a conscience personified. Toni Collette ("Shaft") is Michelle, Gavin's colleague and former mistress, who's watched him leap into the abyss by marrying into the money that provides. their livelihoods. While Michelle tries to pull Gavin from the brink, his wife Cynthia (Amanda Peet, "Saving Silverman") lays out the truth of their marriage and the necessity of forging the document he lost to keep it viable. Gipson's got his AA sponsor (William Hurt) who encourages the man until even he must state what Valerie Gipson (Kim Staunton, "Dragonfly") has discovered painfully - that Gipson's addicted to chaos. It's a nice piece of symmetry that each man's sounding board is also emblematic of his moral weakness.

Director Roger Michell ("Notting Hill") gets fine performances from his leads on down to minor players. Affleck is perfectly cast as a successful, shallow shark, but shows his chops when he faces his inner conflict. He's terrific in an ironic scene late in the film interviewing a fresh-eyed idealist. Jackson shows a nice range from humbled and prideful of new home ownership to enraged and ferociously paternal. His character is reminiscent of Michael Douglas in "Falling Down." Sydney Pollack ("Eyes Wide Shut") is on target as the elder rationalizer who's bred an equally entitled daughter (Peet, also up to the task).

Cinematography by "Any Given Sunday" lenser Salvatore Tontino has the in-your-face franticness of the Stone film. Extensive use of glass effectively provides mirrors for the protagonists to view themselves. Editing by Christopher Tellefsen ("Man on the Moon") is succinct, allowing the audience to make leaps on their own. David Arnold's score maintains tension with ominous rumblings.

"Changing Lanes" does hit a few minor potholes along the way, but it's a pleasure to experience Hollywood come off of cruise control.

The title's double meaning (triple?) is one of the many clever things about "Changing Lanes," a fast-paced thriller that takes place over the course of one fateful day. (Actually, the speedy time frame of the film is a problem as it pushes credibility with the sheer volume of stuff that happens to the two protagonists. I had the same issue with "Training Day," which also strained credibility by packing too much into an implausibly short time.)

Brit helmer Roger Michell ("Notting Hill") makes his American directing debut with the original story by newcomer Chap Taylor and vet scripter Michael Tolkin ("The Player"). When the two worlds of Doyle and Gavin collide, each is on his way, via Manhattan's FDR Drive, to the appointment of their respective lives. Gipson is en route to a custody hearing that will mean getting visitation rights to see his two boys, or lose them forever if his ex-wife (Kim Staunton, "Dragonfly") moves to Oregon. Doyle has hit rock bottom - he's a recovering alcoholic with a volatile personality that his AA sponsor (in a nice little cameo by William Hurt) says thrives on chaos. When Gavin hits his car on the FDR, the attorney, in a rush to get to his own appointment, strands the hapless Doyle, causing him to be late for the hearing. Unbeknownst to Gavin, in his haste to get away, he drops a very important file, which Gipson finds.

Suddenly, the two men are pitted against each other in a struggle of wills and resources. Gavin desperately needs the file that contains the crucial power of appointment that will permit his law firm, owned by his powerful father-in-law (Sydney Pollack), to take sole control of a trust fund that is worth over $100 million. Doyle, whose carefully laid plans to keep his boys around suddenly goes up in smoke, simply wants the time he lost back. Gavin uses whatever means his affluent position will allow to get back the precious letter while Doyle wields the file as his sole weapon against the lawyer. But, "Changing Lanes" is about more than revenge and this is what makes the flick entertaining. There are layers to the story as the men both undergo dramatic changes, both in their lives and in their integrity.

Samuel L. Jackson is always a pleasure to watch and continues to do so as Doyle Gipson. The actor has been in a hip, action mode for a while, so it is nice to see him play a character with real problems and little recourse to solve them. The big surprise, though, is Ben Affleck's perf as Gavin. The actor comes across as a man who seems to have everything - a beautiful, loyal wife, a prestigious job and even a yacht forthcoming. As Banek's disastrous day unfolds, we learn that all is not so bright for the young attorney who committed some questionable dealings in procuring the all-important power of appointment from a dying client. The collision on the road forces Gavin to experience a very different collision of moral forces in his mind.

The supporting cast is not given a great deal to do, but the casting of an exemplary cast raises the background characters beyond just filling space. Toni Collette ("The Sixth Sense") is a chameleon-like actor and is able to inhabit any role she is given. Her character, Michelle, is Gavin's colleague and former lover. She reps integrity, but she is also the means to Gavin's revenge against Doyle. Sydney Pollack lends class to the role of Delano, Banek's boss, mentor, dad-in-law and the real cause of Gavin's dilemma. Amanda Peet, in the small but important role as Cynthia Banek, Gavin's spoiled-rich-kid wife, is coldly clinical as a woman who will even put up with her husband's infidelity if it means getting more power and money - a good performance. Dylan Baker is devilishly slimy as the fixer hired by Gavin to wreck Doyle's life.

Sophomore lenser Salvatore Totino ("Every Given Sunday") keeps things cool with a bluish edge to compliment the dark mood of the film. Production design, by Kristi Zea ("The Silence of the Lambs"), utilizes colder hues, with splashes of color provided by the artwork populating Gavin's opulent law firm's office space. Music, by composer David Arnold, fits the tone of the film well.

"Changing Lanes" isn't a great film but it fits the bill for movie entertainment on the big screen. Assured performances and quality behind the camera make this more than routine.