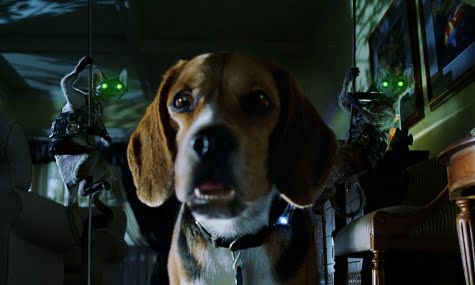 Professor Brody (Jeff Goldblum, "Jurassic Park II") is on the verge of discovering a cure for human allergies to dogs. This doesn't sit well with Mr. Tinkles (voice of Sean Hayes, TV's "Will and Grace"), a pampered Persian seeking to return world rule to his fellow felines. When the Brody's dog, a canine agent named Buddy, is catnapped, the canine underground's attempts to plant a new agent is foiled and it's up to a Beagle puppy named Lou (voice of Tobey Maguire, "Wonder Boys") to protect the humans and foil the felines in "Cats & Dogs."

After the successful anthropomorphics of the "Dr. Dolittle" and "Babe" movies, "Cats & Dogs" would seem a natural. But a slew of special effects, Jim Henson's creature shop and trained animals can't make up for witless, charmless writing.

After the somewhat amusing catnapping episode, we settle in to watch a film that simply lays there. Dogs drive vehicles to headquarters and use surveillance devices. Ninja cats and a Russian Blue attack Lou. The professor forgets his son's soccer practice. Mr. Tinkles gets driven around in a limo. The Brody's are held for the ransom of the allergy drug, which Mr. Tinkles plans to reverse and distribute via a horde of mice. All of this is numbingly boring.

The dogs at least look like real dogs, although the vocal talents of Susan Sarandon, Maguire, Charlton Heston, Joe Pantoliano and Michael Clark Duncan are wasted. Alec Baldwin's Butch, an Anatolian shepherd, is the most likeable character in the film, although even he is forced to say lines like 'Son of my mother.' (Baldwin now has the distinction of appearing in two of the worst children's films ever made with this following "Thomas and the Magic Railroad.")

The cats are all clearly puppets, an uneven distraction. In fact the cats of "Cats & Dogs" bear more resemblance to Gremlins than to actual household pets. Yet even these cats fare better than the human cast. Jeff Goldblum appears to be in a drugged stupor, his apparent reading of an absent-minded professor. Elizabeth Perkins ("28 Days") is embarrassingly stiff and young Alexander Pollock ("Big Bully") is bland.

I couldn't be cattier - "Cats & Dogs" should be relegated to the pooper scooper.

Since time began, the fight for world domination has been going on between two powerful and intelligent adversaries. Unknown to mankind, cats had once wielded supreme power until the canines of the world threw out these feline dictators. Since then, the struggle has continued until now when kitty-cat leader, Mr. Tinkles (voice of Sean Hayes) has come up with a plan for him and his minion to take back power and rule the world once again in "Cats & Dogs."

Just look at the concept presented here: talking, smart cats and dogs wage a war - the cats want to take over and the dogs, the loyal creature that they are, want to save man from feline tyranny. Throw into this mix a mad scientist, Professor Brody (Jeff Goldblum,) who is on the brink of finding a permanent cure for dog allergies, a cure that would make it possible for every man woman and child to own a dog. The cats, led by Mr. Tinkles, will stop at nothing to destroy the formula and put Mr. T at the helm of a kitty-dominated world.

When the Brodys' canine guardian Buddy is catnapped, a new protector must been put in the old bloodhound's place to make sure the family is safe and unaware of any danger. Circumstance pushes a cute beagle pup into their household and the little guy soon learns of the evil feline plan. He is recruited by doggie secret agent Butch (Alec Baldwin) and undergoes an intensive course of training to fulfill his mission - protect the formula and the family. When the Brody son, Scotty (Alexander Pollock), rejects the puppy, calling him "Loser," or "Lou" for short, it becomes the little dog's additional mission to become the boy's best friend.

This all sounds like a great idea - on paper, at least. Talking cats and dogs, high-tech special F/X and a story concept that seems like a real winner should make this a good, if not great, kids' movie. It isn't and fails, miserably, in bringing any life to the wooden, unfunny screenplay by John Requa and Glenn Ficarra. The elements of a successful film are there, but the unentertaining story that should bring the animals and the F/X together falls flat on its face. What we get is a routine fantasy with bad kitties trying to take over the world and the good doggies out to stop them. Throwing in numerous James Bond references - like an evil Russian Blue cat hurling a knife at Lou, saying it's "from Russia with love," get it? - and lots of high-tech gear like doggie rocket sleds is supposed to make it exciting. Well, maybe for very small kids, but I think not for anyone else.

The vocal talents used to give voice to the cats and dogs are okay, but none of them breaths real life into their animal personas. Compare this film, for example, with the much funnier anthropomorphic efforts in the recent "Dr. Dolittle 2," where a few lines by a raccoon with rabies provides more laughs than the entirety of "Cats & Dogs." Toby Maguire is bland as the voice of little Lou. Alec Baldwin gives strength to his vocalization of Butch, but he fights a losing battle. Sean Hayes is more annoying than sinister as the power hungry feline, Mr. Tinkles. Wasted are the vocal efforts of Susan Sarandon, Joe Pantoliano, Michael Clarke Duncan, Jon Lovitz (who should have had a heck of a lot more fun as the toady hench-kitty, Calico) and, especially, Charleton Heston. Live action players Goldblum and Elizabeth Perkins must be told they made a horrible career decision showing up here.

It is unfortunate that the special F/X team, led by Ed Jones and utilizing the talents of Jim Henson's Creature Shop, are saddled with the incredibly lame story. These folks make the animals do the impossible - talk, fly, engage in martial arts and operate a rocket sled - and could have, with a well-written, intelligent story and its execution, made this a fun summer flick. As I have said many times before, special F/X, alone, do not make a movie and even a kiddie pick should have intelligence and wit. "Cats & Dogs" just batters you with the inane and lots of it.

Whoever created the theatrical trailer should be applauded (or disdained) for doing such a great job in making a bad movie look good. Maybe that crew should have made "Cats & Dogs." This is a case of shoot those responsible and forgive the technicians.