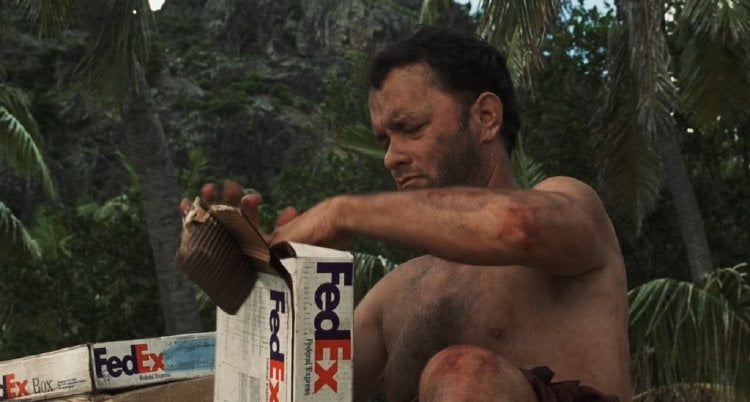 Federal Express troubleshooter Chuck Noland (Tom Hanks) travels the world to spread the word to the growing number of FedEx employees that "we live or die by the clock." Time is everything to Chuck and even the Christmas celebration with his fiancie, Kelly Frears (Helen Hunt), is measured in minutes as he is called away, yet again, to deal with some new company crisis. On the way to his latest emergency an unexpected problem forces his jet to ditch in the middle of the Pacific Ocean, leaving Chuck alone to survive or die on a deserted isle in Roger Zemeckis's latest, "Cast Away."

Chuck Noland (Tom Hanks) emphasizes the digital clock just installed in Fed Ex's newest office in Russia to his new hires in training. He calls his girlfriend Kelly (Helen Hunt) to rhapsodize over the fact that he's sorting packages within the shadows of Red Square, and that he'll be home for Christmas in Memphis in eighteen hours. At the extensive family dinner table, the troubleshooter is beeped for another emergency halfway around the world, forcing him to exchange gifts with Kelly in their car at the airport. She gives him a pocket watch containing her picture that had belonged to her grandfather. He gives her a package the size of a ring box, waves and declares 'I'll be right back!' in director Robert Zemeckis' "Cast Away."

Of course, Chuck isn't right back. The private FedEx plane he's on begins to encounter mechanical difficulties in a storm over the Pacific. Chuck risks hurtling objects to secure his new pocketwatch, then watches the sea approaching through the cockpit windshield. Miraculously, he finds his way out of the plane and inflates a life raft, which pulls him to the stormy surface. Luck is again on his side when he washes up on an abandoned beach. However, he quickly discovers the island is uninhabitted, so constructs a large help sign on the beach and begins to gather wreckage, packages and the one dead body which wash ashore in the aftermath of his crash.

Survival means learning how to open coconuts, catch fish, and make fire. As it begins to dawn on Chuck that his chances of rescue are slight (he figures out that the search area must be twice the area of Texas), he starts to open the FedEx packages he's neatly stacked and protected (ever the company man). A punk rock dress is turned into a fishing net; figure skates are used as cutting tools, and eventually, for dental surgery; video cassettes provide binding material. A volleyball, marked with Chuck's own handprint in blood, looks like a face and becomes Chuck's confident, Wilson. All the while, though, that precious picture of Kelly beckons and Chuck knows survival isn't enough - he has to attempt to save himself or die trying.

"Cast Away's" already gathered reams of press during its production due to the unusual nature of its shooting schedule. First, Hanks gained weight, ballooning over 200 lbs. The first half of the film was shot, then went on hiatus as Zemeckis went off and made "What Lies Beneath," while Hanks dieted almost fifty pounds off his frame and let his hair and beard grow wild. (The transition is handled unimaginatively in the film with a 'four years later' title card.)

Hanks deserves a lot of credit for tackling this role, not only for the physical hardships he endured. Yes, it's Best Actor nomination (and possibly a third win) time for America's favorite thespian again. For almost two hours of the film's 140 minute running time, Hanks is alone. His Chuck Nolan begins the film as a company guy who's always too on the move to stop and smell the roses. While he truly loves Kelly, he has trouble expressing emotion. On the island, he goes through hope, despair, frustration, industriousness, creativity, cowardice and courage. The man brings tears to your eyes over a *volleyball*.

Of the barely-there support, Hunt is fine. Better is Nick Searcy as Chuck's buddy Stan, who's losing his beloved wife of many years to cancer. Searcy is true support to Hanks, playing a man more in touch with life, ironically through approaching death, than pre-accident Chuck. And let's not forget Wilson, probably one of the best supporting inanimate object in film history.

Zemeckis' production is top notch, with ace lensing by Don Burgess ("What Lies Beneath") and tight editting by Arthur Schmidt. Alan Silvestri's score is simple, yet effective. Screenplay by Willian Broyles Jr. shows provides nice grace notes, such as the (Guardian) angels' wings which embellish the one package Chuck doesn't open, providing a connection from film's opening to closing. Time is measured in seconds, then in months.

"Cast Away" is a reflection upon what's really important in life and a showcase for Hanks' acting abilities.

Chuck is a true workaholic who lives his life by his tenets of time. When we first meet him he is lecturing a group of Muscovite FedEx workers (with a translator) on the time criticality of delivering their packages around "the world on time." In a whirlwind, Chuck finishes one job, joins his family for Christmas dinner, proposes to Kelly and is off again on his next corporate disaster. This time, though, things go drastically wrong, his plane crashes and Chuck finds himself stranded, alone, on a small, isolated tropical island.

Without food or water, the castaway has to find the means to survive. He learns, quickly, to find fresh water. He then harvests coconuts, after almost getting conked by one, and extracts their milk and meat. Fishing is next and Chuck learns the rudiments of fashioning tools and making fire. It's a Robinson Crusoe tale sans Friday and evil pirates as he learns to survive and live one day at a time. Time itself, ironically, changes as Chuck starts thinking in terms of days, months and years instead of minutes and seconds.

Chuck is trapped on the island by a powerful breakwater that hurls him and his rubber raft back to the beach whenever he tries to get past. One day, a fortunate piece of flotsam, the remains of a port-a-potty, washes up on the island. It is perfect to make a sturdy sail that may just push him through the waves of the breakers. As in any survivor flick, you're rooting for the stranded hero every step of the way as he learns the ropes of survival and escape.

"Cast Away" is, except for the requisite special F/X of the jet crash and sinking into the depths of the Pacific (a chilling moment), a survival flick, pure and very simple. Once the disaster of the crash is behind him, Chuck has to face the prospects of no food, no water and no companions, except for a picture in an antique watch given to him by Kelly. It is his one link to sanity and civilization and, as the days drag on to months then years, is one of the two things that keep him sane on the tiny island. I'll get to the other in a moment.

Immediately after the crash and through much of his stay on the island, FedEx packages keep washing ashore. Chuck very neatly sorts them all and puts them aside for future delivery. After a while it becomes obvious to Chuck that he should open them up to see if there is anything useful. He finds, among other things, a volleyball, a pair of figure skates and a fancy dress. The always thinking Chuck puts everything to use, Including the volleyball. An accident causes him to smear the ball with his own blood. The handprint becomes the basis for a face. The face takes on a name - Wilson (what did you expect, Spaulding?) - and a companion is born. (This companion device smacks of another survival film, 1971's "Omega Man," where Charlton Heston anthropomorphizes a bust of Julius Caesar into a conversation buddy.) Wilson becomes such a close friend that, when Chuck gets separated from "him," you feel the man's loss of his friend.

The bulk of the film is about Chuck's survival and, with a masterful one-man performance by Hanks, is a compelling tale told in straightforward terms. There is no man Friday, no marauding pirates and no shark or giant octopus attacks. It's all about living and surviving, both physically and emotionally, from day to day without giving up or losing hope. There is ample foreshadowing of events and changes to Chuck early on in the film as he, as an aside, tells Kelly he has to get a tooth taken care of. You know that pesky tooth is going to plague him later, but the script, by William Boyle, Jr., makes such certainties a surprise.

The last part of the flick, its weakest, has Chuck, rescued, returning home to find the object of his emotional survival, Kelly, married to another. She is still his true love, but not his to have anymore. His angst is soon wrapped up in a cute little coda that has Chuck delivering the one package he saved. The final scene takes place, literally, at a crossroads where we hope Chuck will make the right decision and gets on with his life. It's all very feel good and positive but a disappointment after living with Chuck through his four years of lonely isolation. With little time spent to develop ancillary characters, in particular Hunt as Kelly, there is little to the film beyond Hanks.

The best moments in "Cast Away" are sometime melancholy and sometimes exciting. Chuck's obsession with escape takes on the same manic proportions as Steve McQueen in "Papillon" and, when he finally breaks free, you feel his thrill. A quiet, nighttime interlude has Chuck sail through a pod of whales and one of them looks the man right in the eye, as if to comfort him, that all will be well. And, of course, there are the conversations with Wilson as the ball takes on more and more human characteristics in the eyes of Chuck.

The production team, led by helmer Zemeckis, does a superb, understated job in creating the lonely, island prison that holds Chuck captive. Lensing, by Don Burgess, is in keeping with the island environment, putting you in the middle of Chuck's day to day existence. Costume and makeup take almost a comedic turn, at one point later in the film, where Chuck rises from the water holding a trident to spear fish. The image of Neptune smacks you right in the face, I hope intentionally by the makers. Kudos must go to Hanks for the tremendous physical effort he underwent, gaining weight to portray the pre-castaway Chuck, then losing 50 pounds to become the new, sleek Chuck. The contrast is striking.

One thing is bound to come out of "Cast Away" - a deserved best actor nomination for Hanks. It's a good, not great, film and a terrific character study.