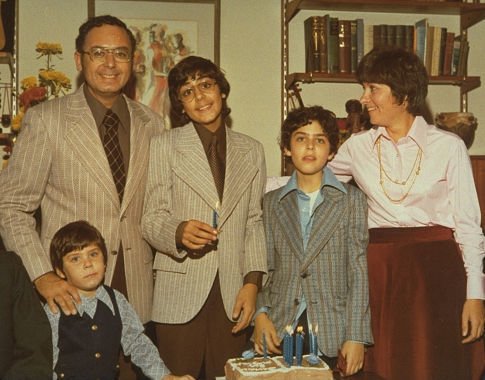 Moviefone founder Andrew Jarecki was making a documentary about children's entertainers in New York when he met the city's most successful birthday clown, David Friedman. Something about David's evasive answers and his mother Elaine's reference to her family in the past tense made Jarecki dig deeper. What he found was a 1980's Great Neck scandal involving child pornography, abuse and incest that resulted in the arrest of paterfamilias Arnold Friedman and his youngest son, 18 year old Jesse in "Capturing the Friedmans."

Jarecki's title carries multiple meanings. There's capturing in the senses of police arrest, capturing via the many cameras pointed over generations and capturing as in finding the essence of truth. The filmmakers have artfully constructed a disturbing family history from present day interviews and copious family archival footage, often disturbing by its very existence. People provide us with their truth only to have the next person make us question what we've been told so far.

The David Friedman of today sits on a city stoop and professes his great admiration for his father, a man who was also an entertainer in his youth who became a respected teacher and inventor. Colorful home movies show a typical family frolicking about on the beach and in their yard. David then begins to talk about how his father ran a computer class in the basement of the family home in order to avoid spending time with his wife. The first crack has appeared.

Elaine Friedman seems fragile and sad about the family that has apparently splintered around her. Then we're presented with a much younger David, speaking directly to a video camera and admonishing us that if we are not him, we should not be watching this video. He begins to speak about horrible accusations that are ripping his family apart, while making some of his own.

A postal inspector describes finding child pornography addressed to Andrew Friedman. A sting operation is set up with a police detective masquerading as a postman. A search warrant helps police uncover a stack of similar magazines hidden in Andrew Friedman's basement. As Chief Detective Frances Galasso describes the 'piles of pornography' strewn about the Friedman home, police photos of the time show nothing of the sort. Police begin questioning students of Friedman's computer classes and suddenly accusations of rape and heinous abuse begin to pile up. Jesse Friedman discusses a youngster who filed multiple charges of sodomy as having occurred during a beginners class who reupped for an advanced class. Former student accusers insist the crimes happened and admit to lying while a non-accuser describes Friedman as a nebbish and the police as bullying.

Just as Jarecki has his audience convinced that a man with pedophilic desires has become the focus of a witch hunt, the screws are turned again, doubts cast. Andrew's brother Howard professes horror and denial at all the accusations, but Jarecki changes our perspective once again by widening his frame on the younger brother. Jesse makes a compelling case as to why both he and his father finally plead guilty, then our skin crawls at the ease with which he lies to the judge while doing so. Throughout, we must wonder at just why David Friedman documented his family going through this horrific period. David explains that at the time, he thought if he caught these moments on video, he wouldn't have to remember them himself, yet he seems to be on a witch hunt of his own - for his mother. Could he be in denial over his father?

The film ends with the ghostly black and white images of Arnold and Howard's baby sister, dancing innocently before her untimely death, two generations earlier. This family that was so intent on documenting itself through images leaves us with more questions than fact.

"Capturing the Friedmans" may present the American family as seen by David Lynch when he looks beyond the white picket fence. It's a uniquely compelling, darkly disturbing American drama.