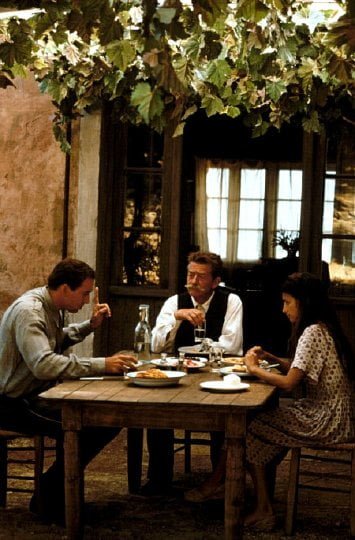 The beautiful Greek Island of Cephallonia was a peaceful jewel in the Ionian Sea until 1941 when the war ravaging Europe landed on its shores. Italian troops are sent to garrison the island and Captain Antonio Corelli (Nicolas Cage), a conscript sent to the foreign land, falls in love with a lovely local girl, Pelagia (Penelope Cruz), in "Captain Corelli's Mandolin."

Months ago, we received the first of the video press material for "Captain Corelli's Mandolin." Watching the trailer tape way back then, I was reluctant about the movie. It looked like a smarmy romance, the kind that really doesn't hold a lot of appeal for me. The press stuff kept trickling in and a sense of mild dread took over as the film's release date drew near. Finally, word came announcing the advanced screening, so I bit the bullet (after all, it does have Penelope Cruz) and went to see what I expected to be nothing more than a chick flick. Boy, was I wrong.

John Madden ("Shakespeare in Love") brings the popular Louis de Bernieres novel, Captain Corelli's Mandolin, to the big screen in a lush, beautifully crafted movie that turns out to be more than just a love story. Captain Corelli, an unwilling draftee into Mussolini's invading army, loves life and the music he plays on his mandolin. When he is stationed, with his artillery battery, on Cephallonia, he sees beautiful Pelagia amidst the island's citizens and is immediately smitten. When Antonio is billeted in the house owned by her father, Dr. Iannis (John Hurt), her resentment of the invaders is softened and the Italian officer works his way into the young woman's heart. A deep, mutual love is born.

The horrors of the war have left the small Greek island unmolested and Italy's powerful ally, Nazi Germany, has left the Balkan country to the Italians to rule. But, in 1943, when Mussolini falls from power, his German masters take a hand in the occupation of Greece. When Italy surrenders to the Allies, the Nazis demand the surrender of arms by all of the Italian forces. Rumors fly about Italian troops being imprisoned by the Germans and the soldiers occupying Cephallonia decide to resist their now-former allies. Battalions of crack German mountain troops are sent to quell the mutineers and the out-numbered and out-gunned Italians pay the deadly consequences.

The focus, as you would expect in a romance-based story, is on the two lead characters. Antonio and Pelagia make a handsome couple and some sparks fly in their romantic scenes, but, overall, Cage and Cruz don't quite have the chemistry to make this an epic love story. The pair is nice but the screen doesn't burn up when they're together. This could have been a disaster for the movie, but the quality of the production, a strong supporting cast, the gorgeous locale, the outstanding tech values and exciting battle scenes, plus the depiction of a little know slice of history all contribute in making this a solid all-around film.

John Hurt, a truly great actor, gives depth to his character, Dr. Iannis, the island's physician. The doctor is an enlightened individual, shunning the Greek Orthodox religion of the islanders, but dedicated to the people of Cephallonia and, in particular, his daughter, Pelagia. Film icon Irene Papas appears as the mother of Mandras (Christian Bale), an illiterate Greek fisherman who had the heart of Pelagia until Antonio Corelli's arrival. With just a look the veteran actress tells volumes of the hopes and fears for her son. The actors making up Corelli's artillery battery, called La Scalas for their propensity to break into the songs of Puccini and other great Italian composers, provide a musical cameo perf that gives a human face to the occupiers.

John Toll's cinematography is, in a word, stunning. The pallet of colors that his cameras pick up give a lushness that complements the island locales. The look of the film is so inviting it makes you want to spend your days drinking in the beauty of Cephallonia. Other techs are on a par with Toll's exquisite lensing. Jim Clay and his production design team had the daunting task of creating the film's Greek island village virtually from scratch. An earthquake devastated the island in 1953, leaving little of the old-fashioned structures needed for the film. The recreation of the capital city of Argostoli is nothing less than remarkable. Costume designer Alexandra Byrne expertly fits the period, clothing the Italian and German troops in real looking uniforms and the islanders in homespun attire. The battle sequences between the Italians and Germans are deftly staged and wrenchingly realistic looking.

The history depicted in "Captain Corelli's Mandolin" covers territory virtually unknown. The only other film that deals with the Italian occupation of Greece and its islands was the charming Best Foreign Film winner several years ago, "Mediterraneo," but that comedic viewpoint did not get down to the nitty gritty of the war itself. If only the romantic center of "Corelli" had equaled the exquisite production.