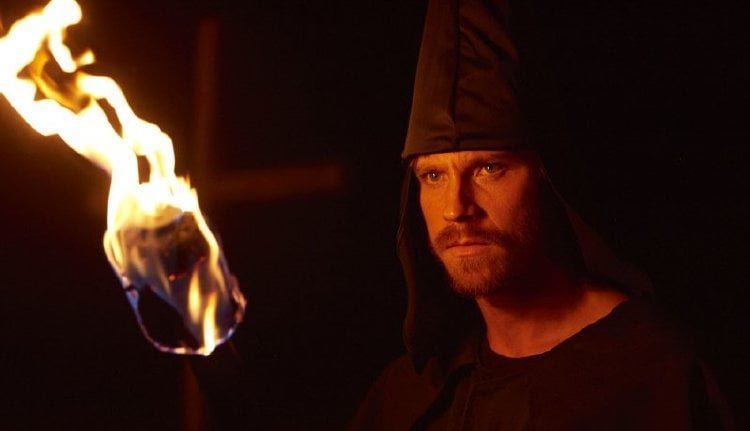 When we meet Mike (Garrett Hedlund) he’s one of a number in Laurens, South Carolina demolishing the interior of a local business, a movie theater Tom Griffin (Tom Wilkinson) is proud to be reopening. But when its marquee is finally revealed, we learn it is being repurposed as The Redneck KKK Museum. The new love of single mother Judy Harbeson (Andrea Riseborough) and the example of Reverend David Kennedy (Forest Whitaker) prove a powerful combination in the redemption of Mike “Burden.”

In his filmmaking debut, writer/director Andrew Heckler takes a true story from 1996, the tale of a black church leader advocating nonviolent protest helping to turn around the life of a KKK member known for hate attacks upon his flock even as his parishioners and own family question his judgment. By emphasizing the tight friendship between Judy’s young son Franklin (Taylor Gregory) and Duane Brooks (Devin Bright), the son of a black man Mike once had the same type of relationship with, Heckler illustrates how hate is not innate but taught and handed down through generations. If only Heckler hadn’t weighted Mike’s attraction to Judy over the Reverend’s hard won influence, he could have made an end run on the oft-lamented ‘white savior movie’ with his black hero, but while the film has its flaws, it works more often than not, buoyed by good performances.

Mike isn’t really Tom Griffin’s son, but the man who was orphaned at an early age might as well be. He is thoroughly in thrall of Griffin, always working to earn his praise, so he is moved and humbled when, after having completed their work, Tom bypasses his actual son, Clint (Austin Hébert), and awards the deed to their new museum’s building to Mike.

We then witness two very different scenarios with Mike on his regular job as a repo man (driving Tom’s same business truck, aptly named Plantation Construction). Repossessing a television at the first house, Mike’s invited for a drink by a man who is subsequently berated for not only not standing up for himself, but for no longer living there. Turns out he’s Judy’s ex and when she laments that her son will be devastated to miss his Sunday racing program, Mike gets shyly chivalrous, offering to ‘see what he can do’ (a chuckling Tom later indulges him). This is not the case when he visits Clarence Brooks (Usher Raymond), clearly uncomfortable when the black man reminds him they were childhood school pals, unrelenting in ‘just doing his job.’

When Mike spies Judy and Franklin in the stands at the local racetrack, he invites the boy into the pit, wowing the kid and wooing the mother. But Mike’s charms cannot surmount her horror when she finds out about his affiliation. She overlooks it for a while, Mike even reluctantly taking Duane fishing along with Franklin, but when she finds Tom Griffin teaching her son how to ‘cut dark meat,’ she issues an ultimatum. Then Reverend Kennedy’s daily peaceful protest outside Tom’s shop turns into a riot when his son Kelvin (Dexter Darden, "The Maze Runner" trilogy, "Joyful Noise") arrives and reacts physically to a racial slur. Tom instructs Mike to go up to the roof and ‘take care of things,’ but when he finds both Franklin and Duane in his sight along with Kennedy, he puts the gun down. His mind is made up but his troubles have just begun, the KKK’s retribution swift and far reaching.

There are a few issues with Heckler’s film besides his redemption rationale, like its weak stab at a titular double entendre or the Hollywood beauty of his lead couple. There is no mistaking Hedlund’s hunkiness and blond, blue-eyed good looks and despite efforts to give Riseborough a white trash makeover, her sex appeal is the real deal. Hedlund’s aw shucks shuffle, a physical tick that finds him continually bobbing his head when he’s not spewing spit, is distracting, but he supplies his character with that certain redemptive something. Riseborough is the stronger of the two, her consistent gum chewing more organic to her character. Very good are Whitaker, his embrace of Mike wary enough to negate naïveté yet strong enough to evince his faith. He handles his character’s betwixt and between conundrums with believable good grace, ably supported by Crystal R. Fox (HBO's 'Big Little Lies') as his less enthusiastic but loving wife. Wilkinson, directed by Heckler to jettison stereotypical rough edges, is scarily insidious (his wife, Hazel, is played by Tess Harper).