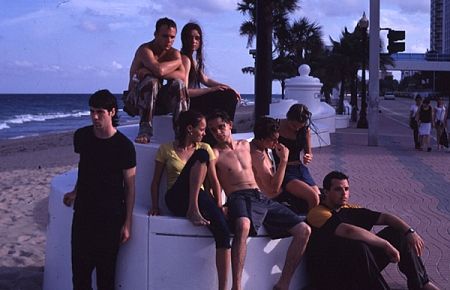 On 14 July 1993 teenager Bobby Kent disappeared without a trace in Florida. Then, his friends were arrested and tried for his murder. The reason for their heinous crime? He was their tormenter. Filmmaker Larry Clark ("Kids") explores this incident in "Bully."

Bobby (Nick Stahl) has been a friend, since childhood, with Marty Puccio (Brad Renfro). He has always held the dominant hand in the friendship, though, abusing his buddy with the unexpected, painful punch for one infraction or another. Up until now, Marty has accepted the abrupt violence, but when he starts dating Lisa (Rachel Miner) and complains about the abuse, she puts the bug in his ear that he can stop it. The seed of murder is soon planted and a conspiracy begins to rid Marty and his friends of Bobby and his abusive ways once and for all.

Larry Clark made splash for himself with his debut feature film, "Kids," an unabashedly harsh look into the lives of a group of unthinking, selfish New York City teens whose mission in life is to seek sex, drugs and trouble. It was a hard film that looked, unblinkingly, at the ramifications of promiscuity, unprotected sex and drug abuse in the AIDS era. If kids didn't get the message, their parents sure couldn't miss it.

With "Bully," Clark changes his focus and locale and moves to Florida to relate the account leading to the brutal group murder of Bobby Kent. Bobby, raised in a normal-seeming family environment, has sociopath tendencies that cause him to take violent action against his friend Marty for any infraction, no matter how trivial. Marty, for years, has suffered under this abusive friendship in a resigned, accepting way without striking back. When timid Lisa falls for Marty, she can't stand to watch him succumb to the tortures at Bobby's hands and soon convinces her none-too-bright boyfriend that the best thing to do is to rid their lives of the bully. Soon, others, like Ali (Bijou Phillips), a teen mother/sometimes prostitute who also suffered abuse by Bobby, join the conspiracy and things get totally out of control.

Enough about the story. What "Bully" is really about, in the hands of Larry Clark, is a film that approaches soft-core pornography with a voyeur's look at teen sex. It seems that fully half of the action shown in the film involves young people screwing without concern for the consequences of their libidinous actions. The inordinate amount of flesh-based antics among the kids is geared to peeping tom status as Clark has his young actors strip and have sex (I won't give the film credence by calling it "making love"). There isn't much reason for all of the skin except to serve as prurient titillation for the viewers.

"Bully" depicts a microcosm of our society of under-educated, under-motivated, under-employed and over-sexed teenagers with too much free time and, if Clark's assessment is correct, under-supervised by their parents. Neither side comes across well in this tome of teen angst as the kids wander around, without a clue, drinking, smoking dope and screwing indiscriminately. The parents don't come across to well, either, being shown as clueless, too, with their children operating beyond the pale of any reasonable authority - they are kind of like juvenile versions of Colonel Kurtz in "Apocalypse Now."

It's difficult to assess the acting of the various characters unless the ability to perform simulated sex is considered thesping. Technical aspects, too, are hard to judge since camera work is relegated to shooting the skin of the young stars, with special attention given to shots of Bijou Phillips's crotch - in close-up. The attention to sexual exploits pushes the true story of murder into the background with the climax (no pun intended) given the bum's rush in the end when all hell breaks loose and the kids do in their nemesis, Bobby.

Larry Clark comes across more as a dirty old man and less a cutting edge filmmaker with "Bully." I go to the movies to see a story unfold. If I want to look at naked, sexy young women, I'll buy a copy of Playboy.