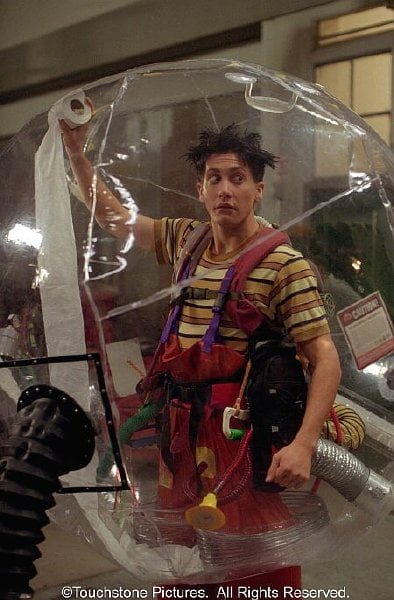 Jimmy Livingston (Jake Gyllenhaal, "October Sky") was born without an immune system and is cared for in his California home by his bigoted, religious overprotective mom (Swoosie Kurtz, "Citizen Ruth") and silent bullied dad (John Carroll Lynch, "The Next Best Thing"). Beautiful teenage neighbor Chloe (Marley Shelton, "Valentine") becomes friendly with the guitar-playing oddball, but Jimmy's mom-instilled fears keep him from letting her into his germ free bubble environment. When Chloe tells him she's marrying obnoxious rocker Mark (Dave Sheridan, "Ghost World") in Niagara Falls, Jimmy designs a portable bubble and sets off on a cross country journey to declare his love in "Bubble Boy."

Let me state one thing up front - I find political correctness to be an overvalued virtue and I found "Bubble Boy" to be both jaw-droppingly outrageous and funny with some sharply observed societal and religious subtext. I'm amazed this button-pushing movie, sure to be reviled by many, came from a Disney studio (Touchstone).

Mrs. Livingston is one of those religious nuts who teaches her child that other religions are bad, TV only gets 1 mom-approved station, and all fairy tales end with the hero getting out of his bubble and dying. Jimmy grows up to be a wild eyed innocent who dines on cross shaped soy fiber cookies and loves watching "Land of the Lost" with 'the whore next door.'

Adorned with the spiky hair and distancing false arms of "Edward Scissorhands," Gyllenhaal (a much wiser casting choice than the more obvious Brendan Fraser) makes us feel his innocent joy at seeing grass and walking outside in his clear spherical suit. He first meets a churlish, regimented bus stop guy (Zach Galifianakis) who's no help in getting him to his destination, but a busload of 'Bright and Shinies,' an 'Up With People'-like cult all named Todd or Lorraine, pick him up instead. Once Jimmy innocently declares them a cult, he's thrown out of the bus and picked up by a friendly biker (Danny Trejo, "Spy Kids") who brings him to Las Vegas where he becomes a human beach ball at a rock concert.

Meanwhile, back at home hysterical Mrs. Livingston is reading the fake ransom note she's had her hapless husband compose. 'From the Jews? They're gonna want more than $100,000!' she screams, in perhaps the flick's most offensive, but in character, line. Screenwriters Cinco Paul and Ken Daurio are attempting to do more than shock and offend, though. They're illustrating how a bad environment affects our new generations.

When the Livingstons hit the road in pursuit of Jimmy, they end up hitting the lad off his Vegas-won scooter and he bounces right into a train car filled with Dr. Phreaks' ("Austin Powers'" mini-me, Verne Troyer) travelling sideshow of Flipper Boy (Geoffrey Arend), Li'l Zip (Beetlejuice), Chicken Man (Stephen Spinella) and the Human Sasquatch (Matthew McGrory). Meanwhile, the leader of the Bright and Shinies (Fabio!) tells them their messiah will look just like the bubble boy they discarded. The Bright and Shinies go off in pursuit of the messiah the freaks wish to claim as their savior.

After being rescued by Indian ice cream and curry van man who has a tragic run in with a sacred cow and earning $500 in a Chinese night club mud-wrestling contest with two bikini-clad babes to pay a 97 year old cabbie, Jimmy eventually lands (literally) in Niagara Falls. The romance is just a plot contrivance for the hero's amazing journey and "The Graduate" parody climax is obvious, but the wrap-up does provides a few character revelation chuckles.

Commercial director Blair Hayes does a pretty good job keeping all the elements interwoven, although things get confusing once or twice along the way. "Bubble Boy" is bright, frantic, innocent, occasionally gross, wickedly observant and just plain nuts.

Jimmy Livingston (Jake Gyllenhaal) was born without immunities and, when he was released from the hospital at age four, his mom (Swoozie Kurtz) spirited him home in a protective, antiseptic bubble. Since then she has been his mommy and muse and has shielded the germ-imperiled boy from the dangers of the world - especially the "little slut" (mom's words) next door, Chloe (Marley Shelton). Despite mom's objections Jimmy falls in love with pretty, sweet Chloe and when she decides to marry another in Niagara Falls, he creates a portable bubble and hits the road to find her in "Bubble Boy."

For all his mother's interference and his plight of being without normal immunities, Jimmy is a normal, well-adjusted young guy with needs, desires and interests commensurate with almost any American teenager. He plays rock music on his guitar and has a very normal interest in the newly moved in girl next door, Chloe. That he lives in a sterile, habitrail-style environment and his mom still reads him bedtime stories (although her fairy tales always end with the hero leaving his protective environment and dying) don't deter him from ordinary emotions. He and Chloe become best friends, but, without the ability to have physical contact, she soon starts dating a rock star wannabe, Mark (Dave Sheridan), and, eventually, decides to marry the sleazy guy - in Niagara Falls, thousands of miles away from Jimmy's home in Palmdale, CA.

With the impromptu wedding only days away, Jimmy makes the life-threatening decision to leave his safe, sterile habitat and go find Chloe to declare his love. Being an intelligent, capable young guy, he builds himself a portable bubble and hits the road. His adventure begins at a bus stop in the middle of nowhere run by a less than friendly, deadpan attendant (Zach Galifianakis). He is given a ride on a bus with the logo "Bright and Shiny" (read "Up With People") only to be thrown out when he innocently calls his generic looking companions (all named Todd and Lorraine) a cult. (Super male model Fabio makes a cameo appearance as their leader.) From there he meets and helps a surly biker named Slim (Danny Trejo) with a flat tire. ("Patches?" says Slim. "I could use some stinking patches!" in homage to "The Treasure of the Sierra Madre.") Jimmy's adventures continue as he slowly treks across the land and he teams up with the members of a circus freak show led by a nasty little guy named Dr. Phreak (Vern Troyer). An East Indian (Brian George) driving an ice cream and curry van gives B-Boy a ride and his faith is sorely tested, to gross out effect. Meanwhile, his overly protective mom and his dad also hit the road in search of their wayward boy, crossing the same paths as their son.

There has been a lot of flack over the shots that "Bubble Boy" takes at the various targets and sacred cows of our society. Religion, whether it be Christianity, the Hindu faith or Judaism, is fired upon frequently and with verve in the script by Cinco Paul and Ken Daurio. This alone seems to offend troves of people. I guess some individuals have a problem with politically incorrect satire. The use of circus freaks is being construed as mean spirited, but these misshapen folk are good and caring (and, yes, funny) characters, much the same way Alfred Hitchcock depicted them in "Saboteur" (1942). Of course, no one gave Hitch any grief, but the present, politically correct world we live in takes offense over showing others less fortunate.

Jake Gyllenhaal ("October Sky") is dead on as the title boy and, with his dramatic rather than comedic background, anchors the comedy with an earnest stalwartness that, say, someone like Brendan Fraser may not have conveyed. Jimmy is resourceful, capable and kind and so in love with Chloe (a charming performance by pretty Marley Shelton) that he'll risk his very life just to hold her. It's a sweet perf in a goofy, coming of age road movie. Swoozie Kurtz is near evil as Jimmy's dominant mom, but the veteran actress gives her character a caring personality, if only when it comes to her son. The plethora of character actors filling out the roles of the wild and wacky people Jimmy meets do yeoman's work and help contribute to the subversive comedy. You might recognize a face or two with vet Danny Trejo ("Con Air") and Verne Troyer (Mini Me in "Austin Powers 2") doing their bit.

Commercial director Blair Hayes makes his debut and keeps the pace brisk but not hurried. Running about 90 minutes, it's the right length, to my mind, for a screwball comedy and "Bubble Boy" exerts its right to satire very well. Maybe I'm just thick skinned but I was not the least bit offended by the offbeat humor, which pushes the envelope of good taste. I think it walked the line admirably well for a lightweight summer comedy. I guess it's all a matter of how you look at things. If you're the kind of person offended by a film like "Bubble Boy" just say no and go see something else. I, personally, like anarchy.