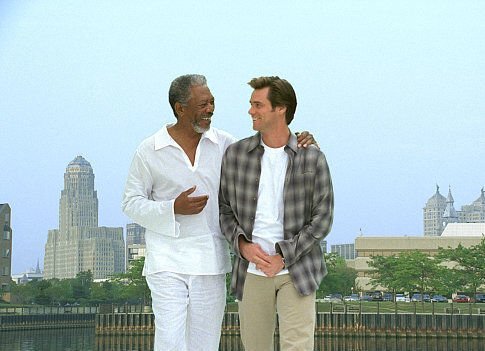 Bruce Nolan (Jim Carrey) is a TV human interest reporter who'd rather be an anchorman. Generally dissatisfied with life, Bruce is convinced God has it in for him until God himself, in the guise of a janitor (Morgan Freeman, "The Sum of All Fears"), invests Nolan with his powers to see if he can attend to all the demands of humanity as "Bruce Almighty."

Jim Carrey is back in his element in a refreshing way - the gross out humor has been toned down and the physical comedy and mimicry he does so well has been played up. He's also never looked better.

Bruce is the type of guy who can't count his blessings, like his beautiful and supportive girlfriend, the aptly named Grace (Jennifer Anniston). When station manager Jack Keller (Philip Baker hall, "The Sum of All Fears") offers Bruce a shot at covering the 23rd anniversary of the Maid of the Mist live, Bruce is sure it means he has a shot at that anchor desk position, but instead it's the beginning of the worst day of his life. The anchor job is handed to his odious rival Evan Baxter (Steven Carell) - on air! - right before Bruce's spot and he goes live with a meltdown of major proportions. Thrown out of the station, Bruce is beaten up by a gang of thugs after trying to assist a homeless man, asks for a sign from God, ignores several and crashes into a lamp post.

A mysterious and individually summoned job offering at Omni Presents leads Jack to room 7 where he discovers the janitor he met downstairs is God. Given the rule not to mess with free will, Jack discovers his powers are real when condiments slide into his hands in a diner booth. Soon he's parting his tomato soup, souping up his car, moving traffic out of his way, training dog Sam to use the toilet and lassoing the moon a la "It's a Wonderful Life" as a preface to a night of 'heavenly' lovemaking with Grace. Bruce has no problem setting himself up for his ideal job with a little help from Jimmy Hoffa and a bit of messing with Evan's teleprompter. But Bruce's great success drives Grace away and brings God back to remind him that he's supposed to be helping people.

And therein lies the main problem of "Bruce Almighty." Screenwriters Steve Koren ("Superstar"), Mark O'Keefe and Steve Oederkerk ("Ace Ventura") handily put Bruce through his paces, but they neglect to flesh out the effects he's caused. We hear an aside on TV that 'lunar activity' has caused a Tsunami. Later his default answer of yes to millions of prayers results in thousands winning the lottery, which results in rioting in the streets of Buffalo? One can just imagine the 'butterfly's wings' effect finding Hoffa's corpse in a Buffalo park might have, but it's not explored or even mentioned here. That free will caveat is conveniently forgotten, too, when it doesn't serve the joke. Still, for the most part, "Bruce Almighty" delivers a gentle message with a spoonful of sugar and irreverent laughs.

After playing the ideal CIA chief in "The Sum of All Fears" and president in "Deep Impact," Morgan Freeman can add God to the list of positions he seems tailor made for. He scores with off the wall reactions (he rates as prayer as 'fine if you're competing for Miss America') and his 'signature line' sparring with Carrey is a hoot. Jennifer Anniston keeps Grace from blending in with the wallpaper in the type of role that often does and adds warmth, as does Baker Hall. Carell is a fine competitive foil for Carrey, acing an extended scene of comic shenanigans when Bruce manipulates his on air delivery.

Director Tom Shadyac is also back in familiar territory after venturing away from comedy with the abysmal "Dragonfly." The film's got a nice bright look, but Buffalo is clearly a back lot (I expected to see Christopher Lloyd hanging from a clock in the town center). Special effects, however, are incredibly natural looking and seamlessly blended into the film.