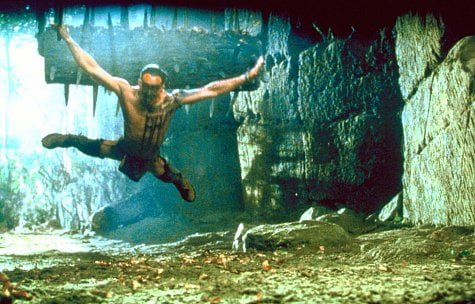 In 1700's France, naturalist Gregoire de Fronsac (Samuel Le Bihan, "Red") and his Iroquois friend Mani (Mark Dacascos, TV's "The Crow: Stairway to Heaven"), are sent by the King to the province of Gevaudan to hunt down a mysterious beast that 'fears man, but not firearms' and 'spares no woman or child.'  The Chevalier de Fronsac will encounter romance, sex, racism and politics while tracking the mysterious and terrifying creature but his most challenging foes turn out to be man himself in "Brotherhood of the Wolf."

The film immediately grabs us by the throat as cinematographer Dan Laustsen's ("Mimic") swooping camera follows a terrified young peasant woman running from an unseen horror.  She takes refuge behind a huge boulder before realizing too late that the beast is behind her.  We witness her carnage in the same way as "Jaws'" first victim, with perpetrator hidden.

Fronsac and Mani are introduced travelling on horseback when they encounter an old man and young woman being beaten in a field.  The masked men stop to dispense justice, with Mani kickboxing his way through several opponents. At their destination, their host, the Marquis d'Apcher (Hans Meyer), brings the men up to date and his son, Thomas (Jeremie Renier, "La Promesse"), joins their quest (the elder Thomas( Jacques Perrin), flashing back from a personally dire moment of the French Revolution, is our narrator).

Samuel Le Bihan is terrific as Fronsac, a determined investigator with a playful sense of humor.  He's loyal to Mani without condescension, stepping back to let Mani show what he's made of when faced with the ignorance of a time that would regard him as subhuman.  Martial artist Mark Dacascos provides the physical fireworks with the grace of a jungle cat. Dequenne spins a mix of spoiled coquette and intelligent decency as the love interest while Belucci leans on her looks and exotic costuming. Cassell's been more interesting in prior roles than he is here.

The Gans/Cabel screenplay successfully intertwines a buddy horror adventure with socio-political commentary.  Production design by Guy-Claude Francois ("Capitaine Conan") is artful, recalling everything from lush, autumnal Hammer Horrors to Neil Jordan's fantastical "The Company of Wolves."  We're treated to such stunning visions as the naked back of a woman dissolving into a snowy landscape or a mirror becoming the doorway for a glittery dream sequence. The film is beautifully editted, although Gans does allow his conclusion to run on too long.

"Brotherhood of Wolf" achieves on many levels.  This imaginative mix of seemingly disparate film styles and genres unifies into a uniquely entertaining movie experience.

Between 1765 and 1768, in a remote, rugged part of France, a mysterious creature, dubbed the Beast of Gevaudan, savaged the countryside killing over 100 people, mostly women and children. Seen as an affront to his absolute authority, King Louis XV sent the best hunters to destroy the monster only to fail. Helmer/co writer Christophe Gans uses this legend as a starting point for a tale of love, politics and religious fervor in "Brotherhood of the Wolf."

A young scientist, recently returned from New France with his Iroquois Indian companion, is sent by the king to use his naturalist skills to kill the beast that has wreaked such deadly havoc on his subjects. Gregoire de Fronsac (Samuel le Bihan) and Mani (Mark Dacascos) arrive on the heels of the latest brutality by the Beast and it is up to them to discover the true nature of this seemingly supernatural creature that can kill so indiscriminately. But, the locals, led by aristocratic Jean Francois (Vincent Cassel) and the clergy, harbor a dark, sinister secret and Fronsac and Mani face staggering odds to their own survival.

Christophe Gans, with the story he co-scripted with Stephane Cabel, has created a beautifully crafted artwork that invents its own viewpoint of the events that transpired over two centuries ago. The based-on-legend tale begins on a stunning note as Fronsac and Mani come upon and old man and his daughter being beaten by a mob for witchcraft. Mani, played by martial arts champion Dacascos (TV's "The Crow: Stairway to Heaven"), proceeds to kick ass and take names in a thrilling one-man battle as he defeats all comers. The images of the fight, shot with crystal clarity by lenser Dan Laustsen, flow between real-time and slow motion as the Native American warrior and medicine man uses his staff to stop the mob's nefarious plans.

The story doesn't try to sustain the energetic tempo of the start but does keep a brisk pace (not an easy task in a 140 minute film) throughout. Gans is directing a large ensemble cast, with many principle players, in an effects extravaganza and he mostly succeeds. There are a few too many threads to the tapestry of tales in "Brotherhood of the Wolf" and some are not as focused and developed as others, something that would be fixed by a bit of judicious editing. This is the main problem with "Brotherhood" and does keep the film from attained the overall excellence that the technical details warrant.

Praise must be ladled out liberally for the outstanding technical credits in "Brotherhood of the Wolf. The brilliantly innovative photography by Dan Laustsen is captivating in its color palate, clarity and, in some scenes, beautiful works of art that could hang in the Museum of Fine Arts. Sound effects (by Leslie Shatz, Patrick Dodd, Nicolas Becker and Fabrice Conesa Alcolea) have a hyper-clarity that matches up perfectly to the photography. The Beast F/X are provided by Jim Henson's Creatures Shop and are an amalgam of a snarling, slathering wolf-like creature that sure would put terror into the hearts of the local peasants. The score, by Joseph Lo Duca, is enjoyably dominated by the dulcet tones of a dulcimer. Fight choreography, by Hong Kong import Philip Kwok, is outstanding to watch - even if the angry mob always attacks the good guy one man at a time. (Why is it that the mob never seems to realize that, if they all rush the hero at once, he can't kill them all?)

Samuel le Bihan and Mark Dacascos, as Fronsac and Mani, are King Louie's version of the Green Hornet and Kato and the actors command the screen. Le Bihan comes across perfectly as the young, but extremely intelligent, educated and capable scientist who eschews the supernatural myth about the Beast. Dacascos, throughout the film, provides a fluidity of movement and quiet dignity to his role as the fighting shaman. The actor holds a presence on the screen with little need to voice himself, especially when he can make his point quite markedly with his hands and feet. The rest of the large cast to their jobs well, overall. Monica Bellucci ("Malena") is gorgeous as Gevaudan's premier courtesan and Fronsac's seductress. Emilie Dequenne gives a new millennial spin to her role as the spoiled, but quite able, rich kid who falls for Fronsac (and vice versa). The only false note in the casting is Vincent Cassel as the dark, brooding, secretive one-armed Jean Françoise, which is too bad as this character is quite significant to the story.

The combination of monster tale (the influence of "Jaws" and "Predator" are obvious), great techs, solid performances, cool F/X and an assured hand at the helm make "Brotherhood of the Wolf" a must see film on the big screen. The shortcomings keep it from being a great flick but there is still plenty going for it.