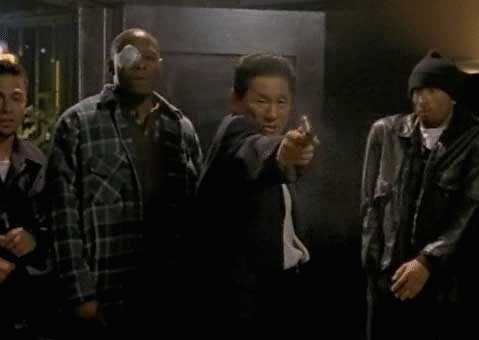 Yakuza tough guy Yamamoto (Beat Takeshi) is forced to leave Tokyo and heads to LA to find his younger half-brother Ken (Claude Maki.) Soon, the older gangster realizes he is thrust back into the old violence he left behind in Japan and, before long, he commands a sizable gang of his own. When his Yakuza brethren refuse to bow down to Mafia pressures, it's all-out war in director/writer Takeshi Kitano's "Brother."

In the world of the Japanese Yakuza, 'brother' signifies both a bond stronger than blood and the immediate underlings of a clan Yakuza's oyabun, or father. Writer/director/star Beat Takeshi is Yamamoto, saved from execution by the rival gang who've killed their boss by Harada (Ren Ohsugi, Hana-bi"), who's switched loyalties to save his skin. Instead, Yamamoto is banished and travels to L.A. in search of his younger, half brother Ken (Claude Maki), a small time drug dealer. Yamamoto quickly recreates the Yakuza lifestyle in L.A., slaughtering Ken's suppliers and building his own empire in "Brother."

Known as Aniki (brother), Yamamoto forms a particular attachment to Ken's friend Denny (Omar Epps, "Love and Basketball"), ironic seeing as when he first ran into him anonymously on the street, he shoved a broken bottle into Denny's eye. Aniki's ability to outfox Denny in the bets Denny constantly proffers builds a humorous rivalry between the two.

Not much else is too funny in the violent world Yamamoto forms around himself. Once the Latino drug connection's been wiped out, they form an alliance with young Japanese hotshot Shirase (Masaya Kato), respectful of Yamamoto after the loyal Kato (Susumu Terajima, "Afterlife") stakes his life to prove Yamamoto's worth. Shirase proves too headstrong, though, eventually embroiling Yamamoto's clan in a war with the Mafia which Yamamoto realizes will prove their undoing.

Fans of Takeshi's stylish violence will delight in the gunplay, Yubitsumes (the removal of a finger joint as apology), hari kiri and death-by-chopstick scenes peppered throughout his film, although newcomers may be left scratching their heads. Takeshi's characters are always men of few words, but his Aniki is too inscrutable, his motivation mystifying. His script is like a mosaic - it gives an impression, but leaves us to fill in the connective tissue. Yet Takeshi's exploration of the meaning of family has a resonance which helps us overlook his film's flaws.

Takeshi's Tokyo backstory is confusing to follow, only gradually making sense as the film progresses. The violence ingrained in Aniki's being could explain why he allows his clan into an unwinnable war, yet it doesn't explain Denny's loyalty, which costs him everything. (It doesn't help that Epps, after facing a shattering revelation, plays a revenge scene too lightly.) Kitano introduces a flighty mistress (Joy Nakagawa) for Aniki out of nowhere, then dispatches her just as abruptly. Still Kitano's Aniki is a striking figure with his elaborate Yakuza back tattoo, black suits and dark sunglasses and his final, prophetic gesture is that of a larger than life iconic figure.

"Brother" is not likely to win new fans for Takeshi Kitano, but it's an intriguing, if not wholly satisfying, addition to his oeuvre.

Steeped in the long tradition of the Yakuza - a gangster society that is an integral part of the overall Japanese culture - "Brother" begins with Yamamoto (Beat Takeshi, the director's on-screen moniker) arriving, alone, in Los Angeles. He's looking for his relocated half-brother and, finally,
finds out where he lives. Flash back to Tokyo and we see the end of Yamamoto's Yakuza clan as a rival gang absorbs it. The deal requires that Yamamoto be eliminated to save the clan, but, the crime boss is secreted to the US.

Once in the good old USA, Yamamoto picks up where he left off in Japan, taking charge of Ken's homeboys. He joins forces with a rival Japanese gang led by Shirase (Masaya Kato) and they being to take on the Chicano street gangs, eliminate them, then move into their territory. Soon, the usurpers come to the attention of the local Mafia and war breaks out between the enemy factions on the streets of LA.

There is one thing you can say about Takeshi Kitano's films. They are the vision of the filmmaker and, whether light comedy or gangland drama, have his firm imprint on every one. His use of over-bearing, schmarmy, cheesy 60's orchestral movie music, often utilized inappropriately, is a trademark. He frequently has the actors look directly into the camera, not at the audience but at the actors they are playing off of. He also maintains the image of the strong, silent type (or, as in the comedy "Kikujiro", the weak, silent type) who uses violence instead of words to make his point.

Kitano's films are interesting - maybe not always good, but always interesting. In "Brother," there are a number of bits that don't quite work. Kitano uses frequent non sequitur scenes of gangsters playing basketball or throwing a football that have nothing to do with the story and actually take attention from the gangland drama. He also, at times, injects humor into violent scenes, taking the edge off of such sequences.  I'll also mention the saccharine score, again, as an annoyance.

On the plus side, Kitano gives full shrift to examining the Yakuza sub-culture with its codes of chivalry, obligation, loyalty, obedience and brotherhood. Members of a Yakuza clan maintain a fanatical loyalty to their anikis (brothers) within the gang with a willingness to put one's life on
the line. This loyalty, obedience and obligation are depicted vividly and violently throughout the story and lend the viewer a look into this culture, little known to American audiences.

Emotion, or lack thereof, takes the lead over the acting in "Brother." The Japanese characters, led by Yamamoto, are symbolic in the dedication to the Yakuza clan. The gang leader's right hand man, Kato (Susumu Terajima), shows his complete commitment to Yamamoto as he declares to "stake my life" on protecting his boss and brother. For Kato, the stakes are high. Omar Epps, as one of Ken's homies, Denny, has a violent initial confrontation with Yamamoto, but overcomes his suspicion and dislike for the man and embraces the Yakuza philosophy and loyalty to his boss. The rest of the cast, with some exceptions, is there to be the fodder that the gang war uses up in copious quantities.

During a summer season that suffers from a dearth of good mainstream flicks, the independent film market is called upon to provide the intelligence in this season's film-going experience. Considering the utter mediocrity of blockbuster fare, the discerning movie maven has some
alternatives. There hasn't been, over the years, a plethora of Yakuza gangster flicks - Sidney Pollack's "The Yakuza" (1975) and Ridley Scott's "Black Rain" (1989) are two - and none from Japanese makers in our market, with the exception of "Brother" and some vintage Akira Kurosawa flicks.  Kitano's is a flawed work, but a breath of fresh air despite the problems.