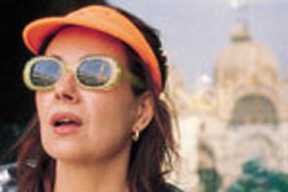 When Rosalba's (Licia Maglietta) husband and children allow their vacation tour bus to leave a rest area without her, she furiously decides to hitchhike home. A stopover in Venice introduces her to Icelander Fernando (Bruno Ganz, "Wings of Desire") and becomes more than a one night stay in "Bread and Tulips (Pane e Tulipani)".

"Bread and Tulips" is blessed with a charming cast and glowing lead in Licia Maglietta. Unfortunately the film's uneven pacing drags it down, making it a bit of a chore to sit through.

Rosalba finds a desolate pensione on its last night of operation and is directed to the Marco Polo restaurant. There she meets downtrodden waiter Fernando who informs her that they're without a cook before presenting her with an artfully arranged cold plate. When Rosalba misses her train home the next day, she returns to the Marco Polo and asks Fernando where she can find a very cheap room. He graciously offers to board her for the evening and she awakens to find a luxurious breakfast spread left for her. On a whim, she takes a job with an anarchist florist, Fermo (Felice Andreasi) and ends up taking residence down the hall from Fernando. New age masseuse neighbor Grazia (Marina Massironi) and Rosalba speculate on Fernando's marital state when he's seen with a young woman and small boy.

Meanwhile Rosalba's husband Mimmo (Antonio Catania), a bathroom fixture businessman, has had enough of Rosalba's disappearance when his mistress refuses to iron his shirts and sends newly hired plumber Costantino (Giuseppe Massironi), a pudgy momma's boy who reads detective stories, to find his wife. Costantino finds love with Grazia instead.

As amusing as Costantino and his travails are, coscreenwriter (with Doriana Leondeff)/director Silvio Soldini spends way too much time following the hapless lug so that we almost forget about Rosalba. Fernando's 'mystery' family (his daughter-in-law and grandson) are revealed for what they are so quickly one wonders why they were ever made mysterious. Rosalba's fantastical dreams, where various characters appear in her bedroom, are too random and don't work their way into the film's texture. Fernando's suicidal tendencies are treated as an aside, an important character distinction that could be missed by a trip to the concession stand.

Yet there are marvelous touches in Soldini's work, such as Rosalba's rediscovery of the accordion, Costantino's lodging in a broken down barge and Fermo's dictatorial treatment of his customers (which sends many of them fleeing). Fernando's archaic way of speaking lends considerable charm to Ganz' soulful waiter. The Venice of "Bread and Tulips" is the Venice known by its residents rather than its tourists.

"Bread and Tulips" is sweet but uneven.

Rosalba (Licia Maglietta) is a bored housewife on annual summer vacation with her constantly bickering family. She is inadvertently left behind at a rest stop and, instead of rejoining her husband and sons, decides to visit beautiful Venice, a place she's never been before. When she meets Fernando (Bruno Ganz), a transplanted Icelander, and ditzy holistic masseuse Grazia (Marina Massironi), her life is about to make a radical change in director Silvio Soldini's "Bread and Tulips."

When she arrives in Venice, Rosalba finds a room in a shabby pensione that is about to close the next day. She befriends the gruff, serious Fernando, the waiter at a local restaurant, who agrees to let her stay in his apartment. The inherent freedom spawned by her decision makes the mother of two push her familial responsibilities to the background and she begins to enjoy her new, private and peaceful life. She takes a job with an anarchist florist named Fermo (Felice Andreasi), makes friends with Grazia and unknowingly interrupts Fernado's attempted suicide.

On the home front, her husband Mimmo (Antonio Catania) is losing his wits not knowing what happened to Rosalba (especially when his mistress refuses to iron his shirts). He hires a plumber, Costantino (Giuseppe Battiston), who has a passion for detective novels, to go to Venice as a private eye to find his missing wife. The amateur PI scours the city of canals for Rosalba without any luck. When he spots a poster for a lost dog, he comes up with an idea and plasters every wall he can find with the elusive Rosalba's picture. When she spots the posters, she arranges a meeting with Costantino. The would-be private dick meets her friend, Grazia, falls head over heels in love with her and informs Mimmo that he has quit.

As Rosalba learns more about Fernando, she too is smitten with the man and love is in the air. A wrench is thrown into the romantic works when Mimmo's mistress, Ketty (Vitalba Andrea), arrives in Venice to inform her that her youngest son is taking drugs. Mother Rosa rushes home only to find out that there is no real drug problem and she is thrust back into the fold of her indifferent family. Rosalba, it seems, is left, once again, alone and lonely, but the blatant romanticism of "Bread and Tulips" can't be stopped.

The film that came to mind for comparison to "Bread and Tulips" was the charming 1989 film, "Shirley Valentine," starring Pauline Collins in the title role. Both movies are about a middle-aged woman, under appreciated by her family, who has the chance to get away and rediscover her true self. For Rosalba, it means meeting people who accept her for who she is and caring for them out of desire, not responsibility. Maglietta doesn't have the charismatic hold on the screen that Collins did, but is kind and likable in the role.

The excellent supporting cast help to make "Bread and Tulips" a charming little flick. The versatile Bruno Ganz, who performed in such classics a Werner Herzog's "Nosferatu the Vampyre" and Wim Wenders's "Wings of Desire," is complex and endearing as poetic Fernando. His character is taciturn and says little, vocally, but his presence on the screen says volumes. And, he has a great face. Giuseppe Battison, as the portly momma's boy Costantino, develops his character nicely as he learns to lose his insecurities and falls, wholeheartedly, for Grazia. Marina Massironi gives a good, scatter-brained perf as the ditzy, lovable Grazia. Felice Andreasi is terrific in the very small role as the lifelong radical florist who gruffly takes the uncertain Rosalba into his shop, giving her free rein in dealing with his customer and encouraging her to play the accordion, an instrument she has forsaken because of her marriage.

After seeing "Bread and Tulips" the words that come to mind are "sweet" and "charming." It isn't a great film but it is a nice film that has its heart in the right place. You're behind Rosalba and her decision every step of the way, especially when you meet the people that become her new family.