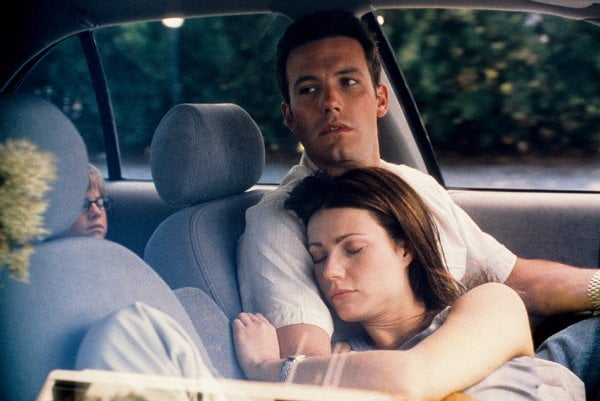 Hot shot ad exec Buddy Amaral (Ben Affleck) gives up his seat on a plane to another man desperate to get home in order to take advantage of the weather related layover with the pretty young woman he's just met in the airport bar. He doesn't realize he's just saved his life and doomed that of another.

One bad year later, encouraged by his assistant (Johnny Galecki, "I Know What You Did Last Summer") to follow the teachings of AAA, Buddy arranges to meet the man's widow, Abby Janello (Gwyneth Paltrow), although he doesn't tell her about their connection. They fall in love, but what will Abby do when she finds out that fate had a helping hand? The complexities of lies and love are explored in writer/director Don Roos' ("The Opposite of Sex") "Bounce."

"Bounce" is a well-written, solidly acted love story with a great marketting hook built in due to the curiosity factor about the casting of former(?) lovers Ben Affleck and Gwyneth Paltrow. Reportedly, this was a project which Gwyneth proposed to Ben as a vehicle for him to stretch his acting muscles.

Affleck has plenty of opportunity to do so, as his character, Buddy Amaral, changes dramatically during the course of the film's one year time frame. Initially a callous, arrogant, womanizing jerk, Buddy sinks into alcoholic depression, guilt and self pity before being shaken back into becoming a more mature, self-exploring member of society. Affleck acquits himself well in this adult role, but is helped immeasurably by his costar.

Paltrow really gets into the skin of Abby Janello, the widowed mom of two small boys who tells Buddy her husband divorced her because it feels more like a choice than the fateful truth. She's blustering through a new job in real estate while dealing with her childrens' abandonment anger and her own guilt and bereavement. She makes us feel the strength of character that enables Abby to carry the staggering weight she's had to assume.

Roos' script (he was the screenwriter for such diverse films as "Love Field," "Single White Female," and "Boys on the Side" before writing and directing "The Opposite of Sex") is smart because his characters are believable and he presents life in all its multi-layered complexities. Not only does Buddy have to live with the knowledge that he unwittingly sent another man to his death, but Infinity Airlines happens to be his big account. He must deal with the 'We Remember' ad campaign which he wins an award for even as he cries hypocrisy. (His drunken 'acceptance' speech/breakdown recalls James Mason's Oscar embarrassment in "A Star Is Born.") Roos also explores the nature of relationship lies. While Buddy's may be bigger, Abby is also guilty.

Roos' and his actors make small moments count too - you can feel the moment Buddy falls in love with Abby (he's been resisting getting romantically involved) when she jumps up from their diner table to trod upon the toilet paper trailing from a young prom girl's shoe. This small selfless gesture speaks volumes about Abby's character and Affleck's gaze upon her softens and deepens. Things get dicier as Buddy shores himself up to tell Abby the truth, which she finds out before he's able. His collusion with an Infinity stewardess (Jennifer Grey) to turn a blind eye to security rules on the night of the crash is another character defining moment.

Support is good with Johnny Galecki giving a tart turn as the fearless office assistant who makes Buddy face his real self. I liked this young actor in TV's 'Roseanne' and its encouraging to see him nail a role in a non-teen-slasher film. Tony Goldwyn (who also appears in "The 6th Day," opening the same day as "Bounce") establishes his character of Abby's husband so well with such short screen time that we feel his presence throughout the film. The film also costars Joe Morton as Buddy's boss/partner, Natasha Henstridge as Mimi, Buddy's airport pickup and Caroline Aaron as Abby's friend and neighbor.

Technically the film is first rate with intimate lensing by Robert Elswit (all three Paul Thomas Anderson films). Smart editting (David Codron, "The Opposite of Sex") choices are made in that the films two major crashes (the second allegorical) are not shown, making the aftermaths more earth shattering.