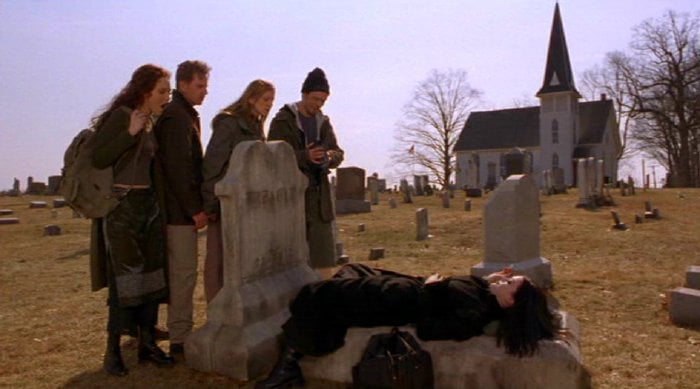 It's 1999 and fans of a movie called "The Blair Witch Project" are flocking to the annoyed town of Burkittsville, Maryland. Local resident (and former mental patient) Jeffrey Patterson is cashing in with Blair Witch merchandise and is taking four tourists on his inaugural 'Blair Witch Hunt' armed with multiple video cameras. Once at the ruins of Rustin Parr's house, however, the group blacks out (after a fair share of partying) to discover ruined equipment, shredded book drafts, and several hours unaccounted for on their video in "Book of Shadows: Blair Witch 2."

Daniel Myrick and Eduardo Sanchez, the original Blair Witch creators, step back to executive producer credits for the sequel (they are supposedly writing Blair Witch 3, which will be a prequel) to their smash hit "The Blair Witch Project" and let documentarian Joe Berlinger ("Paradise Lost," "Brother's Keeper") pick up the reins as director and cowriter (with Dick Beebe, 1999's "House on Haunted Hill").

Firstly, this film bears no resemblance to its predecessor except for its adherence to the Blair Witch lore, so artfully created and expanded upon on the www.blairwitch.com website. While I've heard preview audiences complain that this film is incomprehensible, given thought, it very neatly ties into the legend, while also acknowledging the film as a media event with a wink and an intriguing look at the cause and effect of violence in popular artforms. It helps to have kept up with all the Sci-Fi channel specials (this one recalls the video/DVD special airing of "The Burkittsville Seven").

The film's establishing act humorously begins with MTV's Kurt Loder speaking about the phenomenom followed by Roger Ebert's television review before showing hordes of teenagers raiding Burkittsville's cemetary and Black Hills ('Get out of the woods! There's no damn Blair Witch! screams the town sheriff over a megaphone.) One woman recounts how she so successfully sold Blair Witch twig figures on her front lawn that she eventually was persuaded to sell the stones from her rock garden for $10. This is as funny and hip and the original film's premise, although we begin to see MTV style edits of disturbing images of torture and mutilation around the time the opening credits begin to roll over Marilyn Manson's "Disposable Teens."

Second act rounds up the new group. Tellingly, young couple Tristen Skyler and Stephen Turner are working on a book about "The Blair Witch Project" that asks 'hysteria or history?' (As in "The Blair Witch Project," the characters' names are the same as the actors who play them.) Erica Leerhsen is a Wiccan who wants to commune with the Blair Witch, who she believes was a child of nature, like herself, treated in her time like some unfortunate women of Salem. Goth chick Kim Director professes to be psychic, immediately sensing Tristen's unwanted pregnancy.

The group set up camp at the ruins of the house where the movie trio met their demise and are immediately overrun by a walking tour group comprised of two young entrepeneurs and their customers, a Chinese couple and a German woman. After a brief spat, Stephen's group coyly suggest they saw something sinister at Coffin Rock, which sends the second group scurrying.

Alcohol and pot are consumed in abundance before the five awaken to find the 'Hysteria or History' text fluttering down upon them like snow. With Kim's help, they find their videotapes in the same place Heather's were discovered. Then Tristen has a miscarriage. Do they flee sensibly after all this (and a visit to the ER)? No, they retreat to Jeff's home - an abandoned nineteenth century warehouse in the Black Hills. (Disturbingly, the sheriff tries to contact Jeff when the other tour group is found massacred on Coffin Rock.)

Joe Berlinger has fashioned a nice puzzle box where his film can be viewed from two different perspectives. The film, as we see it, is really the recollection of the Hunt's survivors, as we see them interrogated by the police - flashback in two layers. However, as in the first film, there is video document, which can be construed as either reality or as something to condemn the survivors as 'enhanced' by the Blair Witch. The film acknowledges "Project" as a movie, while allowing that where so many people, including this film's protagonists, believed it to be true, that perception can become reality.

There are no shaky camera effects here - in fact we get special effects in ghostly images seen by the quintet. Once again, sound is used to jarring effect. Unfortunately, the midsection of this film sags a bit. Where the first film was so believable because of its amateur quality, this one suffers when a line is delivered too dramatically in front of a steady camera. A reference back to the first film's 'standing in a corner' doesn't make sense. Horror movie conventions, such as having the group split up when they should be huddled together, call attention to themselves in this otherwise clever script.

"Book of Shadows: the Blair Witch 2" couldn't hope to equal its predecessor, yet it's a surprisingly intelligent and welcome addition to a genre that's usually a dumping ground for low budget efforts.

In 1999 "The Blair Witch Project" created a movie-going tempest as one of the most profitable films in history. Because of the enormous publicity and hype, tourists flocked to the tiny Maryland town of Burkittsville to learn more about the truth and legend of the Blair Witch. Jeff Patterson (Jeffrey Patterson), a local resident with a questionable past, is taking advantage of the phenomenon with his Blair Witch store and the newly inaugurated Blair Witch Hunt tour. Four people from Boston sign up for the tour and they spend the night on the sight of the house of the notorious child murderer, Rustin Parr. But, something happens during the night and five hours of their lives are missing. They soon realize that they encountered something evil in the woods and it is bent on vengeance in "The Book of Shadows: Blair Witch 2"

Sequels to popular horror films usually fall far short of the expectations raised by the original flick. The seminal horror films, "The Exorcist" and "The Omen," were both followed with mediocre, is not outright bad, sequels that paled in comparison to their originals. When I saw "The Blair Witch Project" last year, I found the student film-like qualities - shaky camera and amateur feel - were tempered by the intelligence and imagination of the mock documentary's story idea. I liked the film, but didn't understand why huge numbers of people declared it the greatest horror flick ever. It was an interesting effort, maybe even good, but not great.

"Blair Witch 2" fares a bit better than the other sequels I mentioned. The second entry in the Blair Witch series (BW3 is in the works) benefits from a bigger budget, an experienced (albeit, in documentaries) director and a script that has intelligence (by director Joe Berlinger and Dick Beebe). There are some confusing moments as the tale cuts between the live action, images on video and flash (forwards or backs? It's hard to tell sometimes in the context of the story). But, overall, it is a linear telling as the five protagonists head off into the woods near Burkittsville to uncover the truth about the Blair Witch.

Jeff loads his guests into his camouflage painted van with ample quantities of beer, booze and weed for their stay in the woods. They camp on the site of the child murders, decades before, and set up a variety of video gear to try to capture taped evidence of the Blair Witch. Then the group gets down to doing some hearty partying. Kim (Kim Director) is a member of the Wicken faith and is out to clear the tainted name of witches everywhere. Erica (Erica Leerhsen) is a mega-Goth chick who joins the tour because she "thought the movie was cool." Tristen (Tristen Skyler) and Stephen (Stephen Baker Turner) are a couple of researchers on the hunt to garner material for their grad school work, The Blair Witch: History or Hysteria.

Their revelries are interrupted, at one point, when a competing group, The Blair Witch Tour (made up of Japanese and German tourists), tries to crash the campsite. The interlopers are turned away and they head to the infamous site called Coffin Rock, where ritual murders were done years ago. The Hunt gang continues to party until they all eventually pass out. The next morning, they are horrified to find that, while they were asleep, someone trashed the camp, destroying all the video equipment and shredding the volumes of research brought by Tristen and Stephen. Erica, inexplicably, tells the rest that the tapes from the camera are buried under the foundation of the murder ruins (as were the tapes in the original BW). They find the tapes, pack up and head back to Jeffrey's digs to use his elaborate video gear to check out what was recorded. They find, while watching, that the time stamp on one of the videos has an abrupt jump in the middle that shows a glitch cover the five hours when all were thought to be asleep.

Things start to blur, at this point, as the action jumps around. Dreams and daydreams mix with reality and the video surveillance cameras around Jeffrey's place record something quite different from the live action. As they continue to try to unravel the mystery of the missing hours, it becomes apparent that something wicked has this way come. Kim goes missing and the local sheriff calls Jeff on the phone to investigate the brutal, ritualistic murders of the Blair Witch Tour group at Coffin Rock. Reality and the fantastical merge together as the confused and frightened campers learn what really happened during that crucial five-hour lapse.

The helmer and co-scripter for BW2, Berlinger, as I said, hails from a documentary background. (I recommend his "Paradise Lost: The Child Murders at Robin Hood Hills.") This is his first outing in film fiction and he does a yeoman's job of marshalling his actors to the effort. The young actors in the sequel are a generic collection of unknowns who don't really give any dimension to their characters. Kim Director is quite photogenic, but looks more like a model posing than a thespian. Erica Leershen gets some mileage out of her cynical Goth chic persona. Skyler and Turner are merely OK as the researchers. Jeff Donovan does the goofy doper well enough but, again, none of the perfs, except for the very funny comic relief by the town sheriff (whose name, unfortunately, I have yet to find), are remarkable.

Suspense driven, rather than horror, the story contains very few chilling moments. One, where the spirit of a murdered child from the distant past appears before the Hunt crew, actual brought a shiver to my spine, but the rest of this horror sequel isn't really horrific, just shocking at times. There is some confusion in the way the events are portrayed, which has caused some negative buzz for BW2. It does require your attention and some contemplation afterwards, but, as sequels go, I've seen worse, much worse. (Did I mention "The Exorcist 2" and "The Omen 2"?)