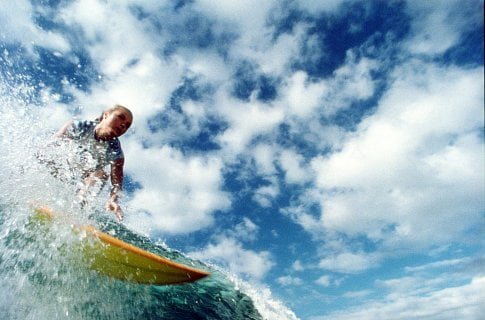 Ann Marie Chadwick (Kate Bosworth) and her younger sister Penny (Mika Boorem) were abandoned by their mother, leaving the elder AM to fend for both and try to raise her sibling. Ann Marie is also a topnotch surfer and, living on Oahu, Hawaii, she has the chance to compete in the Pipeline Masters, the premier event in the surfing world. As the competition draws near, love is in the air for the pretty surf-meister and we find out if romance is stronger than contest in "Blue Crush."

Based on the magazine article by Susan Orlean, "Surf Girls of Maui," Lizzy Weiss developed the story for "Blue Crush" and adapted it with helmer John Stockwell. While the plot of the story is routine (and reminds me of "Lilo & Stitch" with a pair of abandoned sisters in Hawaii trying to get by - but without a little blue alien here), the actors are likable, if a bit narrowly drawn, and the surfing (and really huge waves) reps as a metaphor for the challenges of life.

First and foremost - put aside the feminist diatribe, family drama, romance, etc. - the reason to go see "Blue Crush" is the phenomenal, water-born cinematography by David Hennings. The lenser and his team take on the extraordinarily difficult task of photographing the surf activity, whether frolicking or competing, and put the viewer in the thick of it all. Between the breathtaking camera work and the breath-holding suspense build up in a number of big-wave surfing scenes, the film represents some of the best, pure action sequences I have seen on the big screen (even better than the surf sequences in "Point Break). When the camera takes you into the tube of a giant wave, focused on a surfer shooting said tube, I could not believe my eyes. The fabulous water-drenched camera work is maintained through all of the film except for those brief interludes on land.

The story does not cover any new territory (but this hardly matters to your eyeballs). It opens with a dream sequence showing the girls' mother unceremoniously leaving, then a flash to a surfing accident that has caused Ann Marie to question her ability ever since. When she awakens we learn that she is trying to raise Penny in a beach shack she shares with her best friends Eden (Michelle Rodriguez) and Lena (Sanoe Lake). The trio gets up at dawn's first light, every day, and hit the beach for a round of surfing before they head off to their tedious day jobs as chambermaids in a posh local hotel.

The big surfing meet, Pipeline Masters, is to be held in a week's time and Eden and Lena are right behind Ann Marie, pushing her to prepare for the event and shake off the psychological effect of her accident three years earlier. But, AM has distractions. Little sister Penny, a budding little surf babe, is getting to be a problem as she rebels against her older sister's authoritarian attitude. Then, a pro football team comes to town to take up residence in the hotel at which the girls work. Handsome quarterback Matt Tollman (Matthew Davis) takes notice of pretty Ann Marie and a romance is born. Will the pressures of child rearing and romance prevent AM from competing in the Masters event, only days away? You guess.

The attractive cast does a decent job of giving at least two-dimensions to their characters, but the copious action going on in "Blue Crush" makes character development take a back seat. This won't matter to the target audience of young women who have attractive role models in the ladies on the screen. It won't matter to the guys, either, as they, too, have the attractive babes to keep their attention when there isn't kick ass surfing going on.

Kate Bosworth, as Ann Marie, is a very pretty lead character and does her best with the sparse material on which to build her subject. Michelle Rodriguez has finally broken away from her usual dour persona that we have seen too much of since her debut in "Girl Fight." She gives the most variety to her perf as she pushes her friend to not forget her goal but still maintains the air of a faithful friend. Sanoe Lake, as Lena, is spunky and funny and comes across as a real grrl-friend. Matthew Davis has the tough role as the competition for the competition but is supportive and honorable to the end. Faizon Love gets the most laughs as Matt's rowdy teammate and the movie's comic relief.

The real draws for "Blue Crush," aside from the tanned, scantily clad babes (this alone will draw a sizable male aud), are the strong feminist nature of the story and, as I said, the great surf photography (akin to the 1966 docu classic "The Endless Summer"). The balance of the film, with its light, trite story pitted against awesome techs, is uneven but it still grabs you and holds your attention from start to finish. Some of the surfing sequences are so intense I found myself unknowingly holding my breath - now that's suspense!