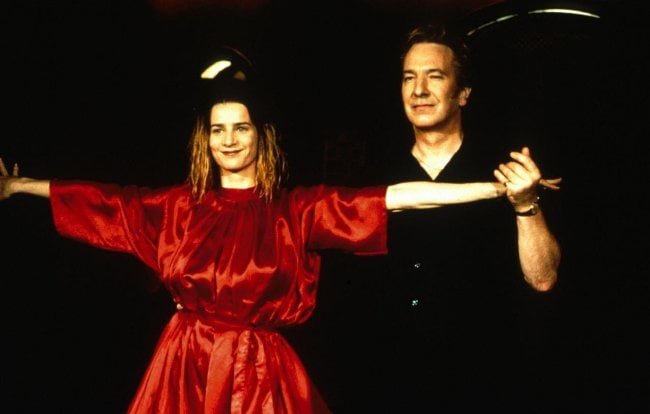 It is time, once again, for Britain's annual National Hair Championship and the mayor of the town of Keighley, England has fought for the honor to host the affair. But, the town folk don't hold the same enthusiasm for the event until a local, estranged family decides to get back together and enter the competition in "Blow Dry."

"Blow Dry" has its heart in the right place but the screenplay by Simon Beaufoy, in the hands of director Paddy Breathnach, doesn't fulfill the potential of either the family drama or the hairdressing competition. There are two different movies playing here, one a melodrama and the other a flashy contest, but neither gets more than shallow coverage.

The core melodrama begins with Shelley (Natasha Richardson) leaving her hairdressing salon and her lover, Sandra (Rachel Griffiths), for a doctor's appointment. The news isn't good, but Shelley puts up a brave front, as if all is well. At the same time, the Nation Hair Championship competition is heating up and members of the hair care community from all over Britain are heading to Keighley.

The lead competitor, Raymond Robertson (Bill Nighy), wants to win at whatever cost and begins a campaign of sabotage on the other players to assure his victory. This includes checking on an old opponent living in Keighley, Phil Allen (Alan Rickman). Phil was married to Shelley when, 10 years before, she left him for Sandra the night before the hair finals that year. The bitter Phil, now just a town barber, had given up competing forever - until Ray visits him and he learns of Shelley's terminal illness. It becomes a battle of the best in Britain when Phil, Shelley, their son Brian and Sandra go against Ray and the rest for the coveted Silver Scissors trophy

This mix of family drama and the glitter of the championship work against each other in "Blow Dry." On one hand the story tries to tug at our heartstrings with Shelley's plight against cancer, a broken family and the need to get it all together one last time for the competition. This part meanders as she tries to rally her ex-spouse, Phil, and son Brian to join her, break the news of her illness to Sandra and keep her cancer under control. This tear-jerking tale is diametrically opposed to the glitzy world of the hair championship.

The competition is handled in a light-hearted way that has the requisite outrageous hair-dos, egotistical cutters, cute team monikers (The Kilburne Kutters, The Style Warriors) that sound like gang names, and a lot of glitter. This goofy humor conflicts with Shelley's serious dilemma and family woes, forcing the viewer to shift gears between the comedy and the drama. By the time it was all over, I didn't know whether I should laugh or cry, so I did neither.

The talented cast, led by Richardson and Rickman, are given little to do to develop their stick character into real people. The backdrop of the championship intrudes into the family drama, abruptly shifting the focus to comedy and glitz. The actors try, but can't get past the material. Richardson's Shelley is a stoic and pragmatic woman. Rickman looks uncomfortable with his character, Phil, and doesn't do anything to show the inner turmoil caused by the current events. The rest - Griffiths, Josh Hartnett and Rachael Leigh Cook - are little more than background window dressing.

The melding of seriocomic material can be done well, but not in "Blow Dry."