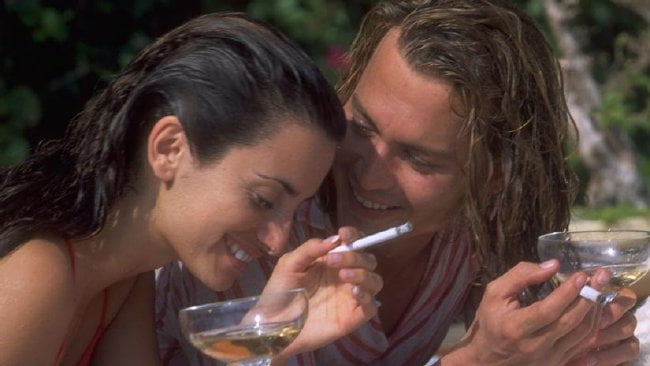 In the '60's George Jung (Johnny Depp) was a small-time pot dealer with big ambitions. When a fateful arrest for possession of 640 pounds of marijuana, and being finked on by his own mother, puts him in Federal prison, he meets Diego Delgado (Jordi Molla), the man who introduces George, and millions of Americans, to the evils of cocaine in the true life story, "Blow."

'If you snorted coke in the late '70s there's an 85% chance it was mine,' says George Jung (Johnny Depp). A disillusioned kid from Weymouth, Massachusetts who moved to California with his buddy Tuna (Ethan Suplee, "Road Trip") in the late sixties, George soon discovered his calling selling pot on Manhattan Beach where he came to be known as 'Boston George.' A stint in prison introduced him to Diego, (Jordi Molla, "The Flower of My Secret") a Columbian who became his partner working with notorious drug lord Pablo Escobar (Cliff Curtis, "The Insider") initiating the white powder into the United States in director Ted Demme's "Blow."

Adapted from Bruce Porter's book by David McKenna and Nick Cassavetes, this ambitious biopic paints George as a decent, if not law-abiding, man with a talent for drug smuggling on a gargantuan scale. While it's tough to buy Jung as such a nice guy when he runs with hardcore, murdering drug traffickers, Johnny Depp proves to be one heck of a salesman.

George's childhood is a rollercoaster affair of paternal love and maternal abandonment. Beloved dad Fred (Ray Liotta) owns a heating oil company and George loves nothing better than to accompany him to work. Shrewish mom (Rachel Griffiths, "Me Myself I") packs her bags and leaves whenever she believes her material needs aren't being met, only to be welcomed with open arms by an adoring Fred upon her returns. George isn't as forgiving. Fred eventually goes bankrupt.

College age George falls in love with stewardess Barbara (Franka Potente, "Run Lola Run"), who introduces him to hairdresser Derek Foreal (Paul Reubens, "Peewee's Big Adventure"), a marijuana connection that gets George's beach operation going. But George soon figures out that they're paying a middle man who can be cut out for much higher profits. Soon he's flying to Mexico in a 'borrowed' plane piloted by buddy Dulli (Max Perlich, "Beautiful Girls") and has created a small family living high off the hog. Mom's impressed by Barbara's two carat engagement ring and her son's roll of hundreds. George's 650 lb. pot bust in Chicago and subsequent fateful jail term coincides with Barbara's death from cancer. Old friends are left behind while dangerous and deceitful connections begin, although George wisely keeps the identity of his Hollywood man Derek to himself - for a time. The tremendous success of the 'Americano' allows him to steal Mirtha, (Penelope Cruz, "All the Pretty Horses") the fiance of a high ranking Columbian drug trafficker, and make the wild party girl his wife.

When George finally faces betrayal and is cut out of the lucrative cocaine ring, he doesn't really mind - he has his millions, his wife and the love of his life, daughter Christina. More betrayals follow, though, until George is destitute and alone, imprisoned until 2015.

Anchored by yet another terrific turn from Depp, "Blow" is, alas, pretty standard biopic fare jazzed up with cutting edge subject matter and fringe characters. It's "Traffic" via "The People vs. Larry Flynt." It's a whale of a story, though, and behind the camera credits are all first rate, from Ellen Kuras' sunny cinematography, Mark Bridges' decades spanning costume design and Jamie Kelman's makeup (Depp's wigs are another matter). Demme's direction is solid, although there's an over-reliance on voiceover (fortunately, it's Depp's).

Performances are generally good to great with Depp transforming himself once again into the entrepreneurial New Englander. Jordi Molla turns in terrific work as Diego, the low man on the Columbian totem pole who forms a partnership with ever loyal George but makes us uneasy with his every move. Paul Reubens is always fun to see on the big screen and he gets his 'hairdresser in the right place at the right time' (Jon Peters anyone?) just right. Ray Liotta is affecting as the father who loves too unconditionally - his final shuffle into his suburban garage to listen to a tape recording from his son will bring tears to many eyes. Griffiths is hissable as the money-grubbing, morally high grounded mom. Franka Potente is sweet as George's first love, but Cruz is shallow and shrill as Mirtha, the woman who George watches evolve into his mother (her second billing on this film is a bit inexplicable). Ethan Suplee is endearing as the overlarge Tuna, reminding me of Philip Seymour Hoffman's character in "Boogie Nights," and is missed when he disappears from the story all too soon. Max Perlich makes Dulli seem like the guy everyone remembers from high school.

From the raucous opening to the Stones' "Can't You Hear Me Knocking?" to the final image of the real Jung's weathered face, "Blow" is a good ride, but not the high I was hoping for.

"Blow" is a biopic with a difference. It not only follows the rise and fall of George Jung, it also chronicles the events that led to the nationwide epidemic of cocaine use and the rise of Pablo Escobar (Cliff Curtis) and the Colombian cocaine cartel into a multi-billion dollar industry. George may simply have been in the right place at the right time, but he did, for a period of years, control 85% of the cocaine flow into this country.

Helmer Ted Demme, using a script by Nick Cassavetes and David McKenna of Bruce Porter's true life saga about George Jung, bites off a rather large chunk in a biography that spans five decades and introduces, literally, dozens of characters as the episodes of the drug trafficker's life are unfolded before us. It starts off low key with Weymouth MA-born Jung leaving the home of his loving father (Ray Liotta) and troubled mother (Rachel Griffiths) and relocating to California's Manhattan Beach in the 60's. To make some easy money, he starts to peddle pot to kids on the beach and soon becomes known as Boston George. An old friend from the east (Max Perlich) tips him that there is a lot of money to be made selling pot to students in Boston. This begins a different spin on the American Dream of profit and greed, as pot selling becomes pot smuggling, which opened the door for the invasion of cocaine, a plague on America that lasted through the 70's and 80's.

"Blow" is an ambitious effort that tells one man's story, episode by episode, as George, several times, rises and falls, eventually losing everything, including his beloved daughter Kristina Sunshine. The inception of the cocaine biz in the US is shown in high-octane spurts depicting the nuts and bolts of the dog-eat-dog drug business. The human side of the flick is played through George's love for his daughter, the product of a very bad marriage with Mirtha (Penelope Cruz), a beautiful, coke tooting, bitch of a woman who uses Kristina as a weapon against George.

Johnny Depp is given the daunting task of making a real person out of George Jung. The talented actor is able to credibly span the 30+ years of George's adult life, as Depp plays Jung as a likable salesman who is not beyond taking a chance when there is a bunch of money to be made. George's face shows the signs of age and wear and tear as the arc of his life eventually lands him in prison forever. Depp gives sensitivity and dimension to the character that sustains the bio portion of the film. This is good as the rest of the large cast, due to the episodic nature of the story, come and go in pretty short order.

Of the ensemble, a few are notable in their small but important roles. Paul Reubens as George's partner and eventual betrayer, hairdresser Derek Foreal, gives his role the appropriate flair it needs. Spanish star Jordi Molla, as Diego, lasts quite a few years in George's life and develops his character well. Rachel Griffiths and Ray Liotta give depth to their roles as George's mom and dad. Franka Potente ("Run Lola Run") is only around for a short time as George's girlfriend, Barbara, but the actress gives a nice perf in the small role. Cliff Curtis is deadly as the ruthless Escobar. Cruz gets to be a meanie and pulls it off as the selfish, drug abusing Mirtha.

Production-wise, "Blow" does a solid job of giving each era of the story its own period look and feel. Photography, by Ellen Kuras, is straightforward without being overly stylish. Costuming, by Mark Bridges, suits each period while giving George a particular, continuing style that spans the years. The rest of the behind the camera techs are first-rate.

"Blow" is an ambitious effort that tries hard to keep its episodes flowing from one to the next and succeeds most of the time. Johnny Depp, who also voices the narration in a convincing Boston accent, is the one thread that is drawn through the whole tapestry and is good, but not great. The movie works well on its two levels, though.