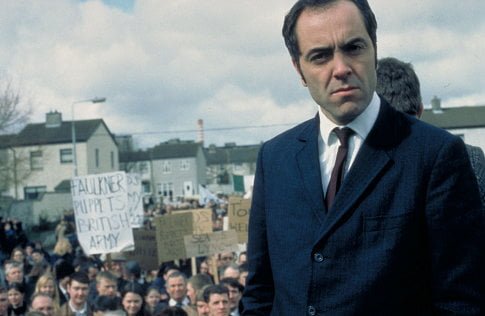 "There's many lost, but tell me who has won"
U2, "Sunday, Bloody Sunday"

On 30 January 1972, the people of Derry, Northern Ireland, joined together to stage a peaceful civil rights march against the internment, without due process of law, of innocent victims of "The Troubles." The British overlords, suffering injuries and death among its occupying troops at the hands of IRA insurgents, have ruled the north with an iron hand and have outlawed the march. As the protesters converge, the British commander orders his battle-hardened troops to deploy and "scoop up" the troublemaking hooligans among the marchers. The confrontation leaves 13 marchers dead and many wounded. The event became immediately known to the world as "Bloody Sunday."

On January 30, 1972, an Irish Catholic civil rights march in Derry came up against a British military with an agenda to arrest 500 'hooligans' and 'players.' Thirteen civilians were killed and fourteen wounded in the event which became known as "Bloody Sunday."

Writer/director Paul Greengrass ("The Theory of Flight") consulted Don Mullan, author of "Eyewitness Bloody Sunday," who had read the hundreds of civilian accounts ignored by the first official inquiry into the massacre and decided to tell his story from four points of view. The authoritarian figures on either side are Ivan Cooper (James Nesbitt, "Welcome to Sarajevo"), a Protestant Member of Parliament leading the Catholic civil rights movement, and Brigadier Patrick MacLellan (Nicholas Farrell, "Plunkett & Macleane"), the man in charge of an operation he didn't entirely support. Their counterparts in the field are Gerry Donaghy (Declan Duddy, whose uncle was the first killed on Bloody Sunday), a seventeen year old just out of prison for stone throwing, and Paratrooper 27 (Mike Edwards, an ex-infantry soldier), a young soldier whose unit fired most of the shots that day.

This powerful film attempts to tell both sides of the story within a 24 hour time frame. Greengrass gathered as many people connected with the original event as possible and filmed from within them in short segments which fade to black. The result is a startling you-are-there experience.

Introducing the young soldiers as they wait for the marchers, we're shocked by what has grown familiar, startled to be amidst armed soldiers awaiting the arrival of their own civilians. We hear the complaints of the British soldiers, who've lost 43 of their own to violence in Ireland and are constantly baited by the local youth, tempered against Para 27, who wonders that 'they're only kids throwing rocks' and that the march is for civil rights. His unit immediately demands that he be with them or against them, forcing him to throw in his lot.

Cooper, the focal point of the film, is an idealist who believes in Gandhi and Martin Luther King. He's torn in multiple directions, by the Catholic girlfriend (Kathy Kiera Clarke) thrown over for politics the night before, by the stridency of a college girl on his team, by his constituents pleading for his time, by those that would call off his march, by the IRA who scoff at his 'Westminster paycheck.' Nesbitt is the moral center of the film. He makes us feel his rising fear and desperation as a breakaway group forms to head toward the Guildhall which is cut off by British troops.

One of those youths is Gerry, who having done time now wants to stay out of trouble and marry his Protestant girlfriend, who's to meet him at 6 p.m. that night (a true death knell). When he witnesses his cousin shot, Gerry's enraged to attack. Gerry embodies the rise of the IRA ranks which occurred after Bloody Sunday.

Brigadier MacLellan is torn between duty (his hawkish superior, Major General Ford (Tim Pigott-Smith, "The Remains of the Day"), ensures him he'll stand by him, only to hand him the reigns of the resulting inquiry, stating that after all, he was only an observer) and humanism (Derry's Chief Superintendent Lagan (Gerard McSorley, "Angela's Ashes") begs him to just let the people march). Farrell shows initial misgivings evolving into sickening reality. He embodies British guilt.

Director of photography Ivan Strasburg ("The Theory of Flight") uses a grim, gray palette for his urgent hand held visuals. The fadeouts give the impression of both how we witness chaos - in uncomprehending bursts - and of memory. Editor Clare Douglas tries to balance the experience by shifting among the POVs, sometimes within mere seconds, but it is impossible to get into the mind of British soldiers as we witness them stopping to shoot those already fallen. The arrogance of power has never been more clearly captured.

In keeping with its eyewitness style, no music accompanies the images, although U2's reaction to the day is heard over the closing credits.

Greengrass' film is a gut-wrenching account of that day and all days where humans bring tragedy upon their own race.

Writer/director Paul Greengrass puts a human face on the players in this tragic drama of a real life event. That face is not always good or bad as he draws the players in well shaded characterizations that show both sides have their strengths and weaknesses. The bad guys, in this examination of the troubles that have plagued the region for so many decades (if not centuries), are the British leadership in the guise of Major General Ford (Tim Pigott-Smith) who orders his men to "get out there and kick some ass" while promising his subordinate, Brigadier MacLellan (Nicholas Farrell), the man running the operation from the isolation of headquarters, that he would stand behind him no matter what - extreme foreshadowing of events to come.

Helmer Greengrass wears his heart on his shirtsleeve as he blames the British invaders as being responsible for taking the earnestly peaceful intentions of the marchers and, through its brutal, deadly action, drove many young men into the IRA ranks and turned the country into a battleground for civil war. The march, in the predominantly Catholic Bogside of Derry, is led by an idealistic civil rights leader, Minister of Parliament Ivan Cooper (James Nesbitt), who advocates Martin Luther King's credo of peaceful change. Cooper has struggled hard to get cooler heads to prevail in the violent northern counties and sees the protest march as a catalyst for a peace movement that could change the country for the better. By the end of that fateful day, the MP's hopes lay as dead as the victims of the massacre.

Opposite Cooper is British Brigadier MacLellan, the thoughtful commander of the occupying troops who, unfortunately, must do the bidding of his general, Ford, even if his aggressive commander's tempestuous orders are destined to cause uncontrolled violence. Lesser players in the big picture are personified by Gerry Donaghy (Declan Duddy), a 17-year old Catholic recently released from jail for his rebellious actions against the Brits, and a young private in the occupying Paras who sees the brutal actions of his fellows and is helpless to stop their unbridled mayhem. Others, real and fictional, populate the film and give it the verisimilitude that makes it more like a documentary than a feature film.

The hyper real documentary style that Greengrass uses to tell the events of that horrific day 30 years ago will be compared, frequently, with Gillo Pontecorvo's 1965 leftist, anti-colonial tome "The Battle of Algiers." Both films put you in the middle of the violent action and both point to the imperialism of the parent countries as the cause of the unrest. The succinct day-in-the-life style that the helmer of "Bloody Sunday" adopts also holds kin to the Ridley Scott's gut-wrenching "Black Hawk Down." Greengrass uses brief views into the different facets of the players of that day, separated by blackness, to build the tensions as the two forces come together for the inevitable confrontation. When the actual slaughter of innocents begins, the film becomes a linear telling of the violence that left so many dead and wounded. It is a stylish, yet sickening realistic, depiction of the infamous event.

Acting is uniformly solid, though the four principle characters are given the best opportunity to flesh out their persona. James Nesbitt ("Lucky Break") is believable as the Parliamentarian, a Protestant, who has the best interests of his Catholic constituents in his heart. He tries to keep the hot heads in the marchers' ranks under control but has no way to stop the trigger happy British soldiers, many of whom have lost friends at the hands of the IRA. Nesbitt, as Cooper, palpably conveys the struggle of trying to maintain order and the pain he experiences as he helplessly watches his people die.

Nicholas Farrell does a decent job as the commander, Brigadier MacLellan, who is usurped by his superior. He tries to keep things cool and controlled, with the support of levelheaded Derry Chief Superintendent Lagan (Gerard McSorley), but the on-the-spot control of General Ford hampers his efforts and brings things to the brink of violence. Declan Duddy as Gerry reps the innocents who are caught in the events on Northern Ireland's Troubles and eventually becomes the unwitting scapegoat of the Brits who need to prove the massacre was provoked. The people that make up the bulk of the cast have a vested interest in the film as many were actual participants in the event or were closely associated with those that had.

Although the end is a foregone conclusion to anyone even remotely aware of this horrific massacre, the makers keep it tight and interesting from beginning to end and keep the gut-clenching suspense going right through to the finale that sums up the repercussions of "Bloody Sunday."