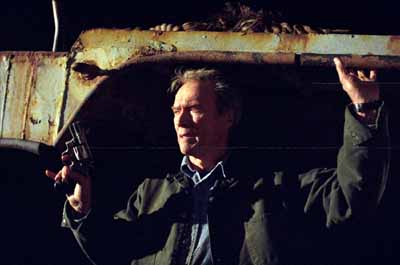 When Graciela Rivers' (Wanda De Jesus, "Ghosts of Mars") sister Gloria is murdered, she hires the recipient of Gloria's heart, retired FBI director Terry McCaleb (Clint Eastwood), to investigate the murder. Soon the senior citizen realizes he may be up against a serial killer who eluded him for years in "Blood Work."

"Blood Work" is like a tattered beach read that's been given the NY Times best seller treatment. Full of red herrings and obvious to the extreme, Eastwood the director nonetheless milks the material for all it's worth, specifically in his own characterization of a still bright mind in an aging, fragile body.

Having not read Michael Connelly's novel, it is difficult to judge whether "L.A. Confidential" adapter Brian Helgeland has made any improvements to the source material, but it's clear he hasn't made enough. This is one of those hackneyed tales that will have audiences rolling their eyes waiting for the hero to come to conclusions they've already reached.

Surrounded by press at the latest bloody crime scene of a serial killer who leaves Chucky Taylor footprints and messages with numeric codes scrawled on the wall in victims' plasma, McCaleb spies his nemesis lurking in the shadows and takes pursuit. When he has a massive heart attack attempting to scale a chain link fence, the hooded, sneakered killer doubles back to watch.

Cut to a couple of years later. McCaleb is retired and lives on a boat, forbidden to drive by his maternal cardiologist Dr. Bonnie Fox (Angelica Huston). When he gets yet another private request for his crime solving expertise, he refuses as usual, but Graciela Rivers has been able to deduce that this victim, her sister, was the organ donor McCaleb benefited from because of their rare blood type. Now indebted, McCaleb enlists his beer-guzzling slacker boat neighbor, Buddy Noone (Jeff Daniels), as a chauffeur and calls in favors from former protege Detective Jaye Winston (Tina Lifford, "Pay It Forward") to begin tracking a killer.

It's a pleasure to watch the 72-year old Eastwood conjure up McCaleb while injecting flinty bits of Harry Callahan as a reminder of what once was. The voice is in shape, but Eastwood is slower here, continually putting hand protectively towards heart. He has fabulous chemistry with Lifford - their initial meeting buzzes with the undercurrent of former lovers whose attraction is still present if now unevenly distributed.

Eastwood keeps his new heart with a new love interest, though, and McCaleb's budding relationship with Graciela is less interesting. A scene where DeJesus begins to sexually seduce the senior Eastwood plays up the significance of her sister's heart within his bruised and scarred chest, but did not play well with a preview audience.

While Jeff Daniels breezily provides comic relief ('Ooooh, Starsky and Putz' he declares when McCaleb enforces his driver not partner rule), Paul Rodriguez and Dylan Walsh are too buffoonish as the 'bad cop/good cop' team trying to keep McCaleb from stealing their limelight once again. Eastwood does stage one clever scene with the two, though, using donuts as bait for information.

Aging FBI profiler Terry McCaleb (Clint Eastwood) suffered a massive heart attack while pursuing a prolific serial murder dubbed the Code Killer. Two years later, Terry is recovering from heart transplant surgery and is approached by a pretty, serious lady, Graciela Rivers (Wanda De Jesus), to find the man who brutally murdered her sister, Gloria. The recuperating former agent refuses, at first, until he learns that it is Gloria's heart that beats in his chest in "Blood Work."

Eastwood's latest directorial effort is a mixture of interesting concepts and clichéd ideas. The hero, McCaleb, is very different from the characters that Clint has portrayed so many time in the past, including his "Dirty Harry" franchise. Terry, with a bad ticker that needed to be replaced, is now frail and invalid as he slowly recovers from the transplant surgery. He can't drive a car, has to keep close track of his temperature, must take lots of medication to avoid infection and is constantly told that he should take naps by his doctor (Angelica Huston). But McCaleb's fragility takes a back seat when he is approached by Graciela Rivers who seeks his help in finding her sister's murderer and learns the truth about his borrowed heart. Like it or not, he now has a vested interest in the case and, despite his health problems, agrees to "look into it."

This begins a winding tale, based on the novel by Michael Connelly, adapted for the screen by Brian Helgeland, of a string of recent murders that may just be related to the Code Killer that Terry hunted, and shot, before his heart problems began two years before. The ex-FBI agent, always cognizant of his borrowed heart and tenuous health, must unravel the ambiguous clues presented him to get the killer. It's the story of a dedicated cop, all too aware of his delicate nature but equally perceptive of the importance of his manhunt, that unfolds before us.

The main strength to "Blood Work" lay in the very different character presented by Clint Eastwood. Terry is bound by his condition to take things easy, living aboard his boat in Los Angeles Harbor. His own problems take a back seat, though, when Graciela lays a guilt trip on him to find Gloria's killer. McCaleb, as he wears himself down during his investigation, develops the gesture of constantly putting a hand to his chest as he struggles with his guilt for living and his need to bring the killer to justice. It is still a pleasure to watch the gravel-voiced actor strut his stuff and show us just what may have become of Dirty Harry in his twilight years.

The weakness in "Blood Work" lay in the constant parade of suspects and would-be killers the story marches by. Early on, McCaleb uncovers one suspect after another but, when I looked at the time, I realized that these suspects are just maguffins used to throw us off track. When one likely perpetrator is presented after just 45 minutes I knew that I was witnessing a bit of writing slight of hand that I didn't fall for. It doesn't help that I figured out who the killer really is well in advance of the movie's revelation.

The supporting cast is adequate for to task with Jeff Daniels providing the comedy relief, and more, as Terry's next-boat neighbor in the marina. Tina Lifford, as McCaleb's former colleague Jaye Winston, has a nice chemistry with the star, making you feel that there is a close, unspoken past between the two. Unfortunately, this chemistry doesn't exist between the star and Wanda De Jesus' Graciela, the real romantic hook in the film. (As an aside, when the inevitable love scene does finally take place, a wash of snickering went through the audience as well as some moans of disgust - pretty amazing for the guy who has been a sex symbol for decades.) Paul Rodriguez, as LA cop Ronaldo Arrango, is basically a thorn in Terry's side that regularly gets his comeuppance.

Techs are straightforward with Eastwood doing yeoman's work as helmer, producer and star. He keeps the pace tight and, except on one or two occasions, moves things along fairly briskly.

"Blood Work" is a cut above the routine serial killer movie in terms of character study and provides a different kind of hero for the star to wrap his arms around. And don't be disappointed - Harry, I mean Terry, still packs a mean gun and isn't afraid to use it.