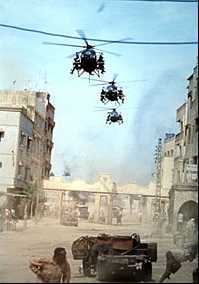 "Only the dead have seen the end of war"  - Plato

It seemed like a good idea. In 1993, warlord Mohamed Farrah Aidid held Somali people in a grip of terror and famine claimed over 300,000 dead. U.S. Army General William F. Garrison (Sam Shepard) decided that the best course of action is to send a heavily armed combat team into the heart of Mogadishu to kidnap the militant kingpin's chief lieutenants, extract them from their lair and force Aidid to concede his stranglehold on the city. But, things go very wrong with the raid-turned-rescue mission in director Ridley Scott's telling of true events in "Black Hawk Down."

In 1993, the tactics of Somali warlords such as Mohamed Farrah Aidid to use hunger to gain power in their civil war had resulted in a famine that left 300,000 of their own people dead. U.S. troops in the country as part of a UN peace keeping mission witnessed Somali soldiers shooting civilians attempting to access UN relief packages pirated by Aidid. In an effort to break his stranglehold, a mission to capture his top two lieutenants at a meeting in the most hostile part of Mogadishu was launched on October 3, 1993. But the Delta Force and Ranger soldiers who go in for a quick hit in four Black Hawks and a convoy of Humvees are attacked by what appears to be the entire city and the 30 minute raid becomes an 16 hour rescue mission in director Ridley Scott's "Black Hawk Down."

As adapted from Mark Bowden's "Black Hawk Down: A Story of Modern War" by Ken Nolan, this 2 1/2 hour film doesn't attempt to explain the complexities of Somalia's conflict (although Razaaq Adoti, as downed Black Hawk pilot Mike Durant's (Ron Eldard) captor Firimbi, is given an expository speech). What it does is give the audience the perspective of the soldiers who went into hell that day.

Little time is spent laying background before the mission begins. Staff Sgt. Matt Eversmann (Josh Hartnett, "Pearl Harbor") is established as an idealistic young Ranger who empathizes with 'the skinnies,' as the soldiers refer to the Somalis, and views his mission as an effort to help an unfortunate country. When his commanding officer suffers an epileptic seizure, Eversmann is put in charge of one of the four 'chalks' who will arrive in Black Hawk helicopters and secure position. Ranger Spec. Grimes (Ewan McGregor, "Moulin Rouge!") is a desk jockey who moans about his lack of action while taking pride in the great coffee making skill which has resulted. He'll be assigned to Eversmann and his first taste of armed conflict due to another man's injury. Eighteen year old new arrival Ranger Pvt. first Class Todd Blackburn (Orlando Bloom, "The Lord of the Rings") is excited about a mission that will find him its first casualty. Ranger Capt. Mike Steele (Jason Isaacs, "The Patriot") is parodied by his men for his by-the-book methods.

Scott begins to build tension as Maj. Gen. William F. Garrison (Sam Shepard, "Swordfish") briefs his men on what they need to accomplish and continues to escalate it as their local point man gets antsy about driving his taxi to its marker position. We witness soldiers leave supplies behind with dismay, convinced as they are that they'll be back within an hour. As the Black Hawks fly into the city, a young boy captures their passing on a cell phone, alerting interior Somali forces (since learned to have been trained and assisted by Osama Bin Laden's Al Qaeda network). For the next two hours, we come to know these men who've vowed to leave no man (living or dead) behind as they fight against unspeakable odds.

Ridley Scott's directorial achievement is nothing short of awesome. Black Hawks are shot out of the sky with grenade launchers and aerial shots make us, along with Garrison back at base camp, privy to the throngs of people converging on the crash sites. Ranger Lt. Col. Danny Mcknight (Tom Sizemore, "Saving Private Ryan") leads a humvee convoy towards a site amidst heavy fire ('Keep your foot on the gas!' he screams to his driver who's just been shot in the face) only to learn he was misdirected. He heads out again after delivering dead and wounded and getting the blood washed out of his humvees. Scott keeps us connected with the disconnected men on the ground as they inch toward each other in territory much like Vietnam where anyone, even women and children, could be the enemy.

Cinematographer Slawomir Idziak ("The Double Life of Veronique," "Blue") captures Scott's vision and production designer Arthur Max' ("Gladiator") rendering of Mogadishu in Morocco with breathtaking images from sweeping devastation to the point of view of an injured soldier beset by a hostile mob. His tracking of the Rangers' run through the final 'Mogadishu Mile' behind a convoy too jammed with dead and injured to take them ironically recalls Ali's run through the streets of Zaire.

The large cast all serve Scott well, with Hartnett having the greatest character arc and Sizemore exemplifying the sheer determination of these men. As Delta Sgt. First Class Jeff Sanderson, William Fichtner exudes so much confidence, his presence offers the relief that everything will be OK. Johnny Strong ("The Fast and the Furious") is the embodiment of heroism as Congressional Medal Honoree Delta Sgt. First Class Randy Shughart who gave his life protecting a downed Black Hawk.

While Scott's final scene, where Eric Bana's ("Chopper") Delta Force Sgt. tells an astonished Eversmann why he's going back into Mogadishu once again plays a little stagey, his words are effective. "Black Hawk Down" is a harrowing experience and one of the year's best films.

Scott musters a considerable ensemble cast and crew in his adaptation of Mark Bowden's true-life war story, Black Hawk Down: A Story of Modern War. Set in strife-ridden Somalia, scripter Ken Nolan converts Bowden's work into a tightly paced, tightly packed war drama that maintains close comparison to the plight of the doughboys of World War One's Lost Battalion. With the best intentions in mind, General Garrison sends his heavily armed force of 160 Delta Force veterans and young Army rangers into the heart of Mogadishu on a bold kidnap mission. Initially, things go off like clockwork until a Somali militia-fired rocket brings down Black Hawk Super Six One. Suddenly, the extraction becomes a life-and-death struggle as the combat team must fight their way to safety and bring their dead and wounded out, too.

Little time is wasted with setup for the critical mission. On paper, the whole thing looks straightforward: land Delta Force troops by helicopter near the warlord's lair at the Bakara Market (a place that resembles an automatic weapons super store) along with ranger support, take captive Aidid's chief aids and beat feet back to base aboard a convoy of Humvees and trucks with the prisoners in tow. When the first chopper is taken down, the general's best laid plans go painfully awry and his men are left, stranded, only miles from safety and must, quite literally, fight for their lives against incredible numbers of armed Somalis.

With the very large cast, it is a difficult task to glean fully rounded performances or develop any character to a three-dimensional degree, but helmer Scott does just that. Josh Hartnett is the focal character of the pic as Sgt. Matt Eversmann, a young ranger who is thrust in charge of one of the "chalk" units tagged to head into the danger zone of the "Moge" to provide security for the Delta force troopers sent to kidnap two of Aidid's key lieutenants. Hartnett puts a credible arc on his perf as a young man who has doubts over his ability to lead his men after his seasoned superior is stricken by an epileptic seizure. A novice to combat, Eversmann must make life and death decisions for his men and overcomes his self doubts and, ultimately, does the right thing.

Tom Sizemore is also a standout as the mission leader, Lt. Colonel Danny McKnight. He carries himself like a commander of battle-ready soldiers and elicits both concern for his men and the hard ability to send them to death's edge. The rest of this huge cast acquits itself across the board. Sam Shepard, as Major General William F. Garrison, the man who masterminded the original attack, has the tough job of being out of the action, helpless to change the course of events, but responsible for the lives of the men he sent into harm's way. Shepard does a solid job of putting a human face on his character. William Fichtner, as battle-hardened Delta Force Sgt. Jeff Sanderson, exudes confidence and ability, so much so that, even in the thick of a firefight against overwhelming odds, he gives strength and will to his men. The rest of the cast, to a lesser degree, fills the shoes of the soldiers they play convincingly. Unlike, for example, "The Thin Red Line" where the players were a homogenous lot with little distinction between characters, "Black Hawk Down" strives to make each soldier an individual.

The screenplay, by first-timer Ken Nolan, takes a complex account of the Battle of Mogadishu, encompassing over 100 individual soldiers and their plights and pares it down to about 40 speaking roles. This is a daunting task, still, but the scribe deftly pulls all the characters and their stories together into a near seamless account of the little know battle involving U.S. troops - the biggest single combat action since the Vietnam War.

Techs, across the board, are outstanding. Cinematographer Slawomir Idziak creates brilliant images wherever he points the camera. The fast paced action of battle, with its chaos and deadly intent, is shown in a you-are-there fashion. Striking images like the night-time strafing by helicopter gun-ships of Somali militiamen trying to slaughter the trapped Americans or the extreme close-up of the stunned look in the eye of a downed helo pilot etch themselves into the mind. The incredible photographer should garner considerable award notice and it will be an absolute shame if it doesn't. Pietro Scalia's editing deftly joins the action on the ground, in the air and at home base fluidly. Score by Hans Zimmer incorporates the haunting Muslim call to prayer, giving it a melodic, exotic cadence that suits the tone of the film. Costuming, conceived jointly by Sammy Howarth-Sheldon and David Murphy, captures both the complexity of the military garb of the Delta troops and Army rangers and the threadbare poverty of the Somali people. Production design by Arthur Max puts you in the heart of Mogadishu and the running gun battles the American troops must endure. This is a film that puts its budget bucks up onto the big screen.

"Black Hawk Down" doesn't quite attain the gut-wrenching gore of the opening of "Saving Private Ryan," but it does keep the sustained pace of battle in a fast-moving, action packed manner that is, viscerally, equivalent. The firefights are as real looking as anything I have seen on any news broadcast. This is a story of brave men and heroes, self-sacrifice and honor under fire. When one of the soldiers asks, "Why do you do it?" he answers the question himself with "It's about the men next to you." This, and the quote from Plato at the film's start - "Only the dead have seen the end of war" - say it all.