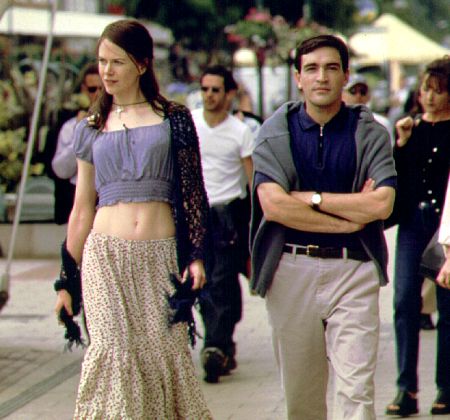 John Buckingham (Ben Chaplin) is a mild-mannered, lonely bank clerk whose luck with finding love has been considerably less than successful. He decides to make a last-ditch effort to find a mate and surfs the Web to the site "From Russia With Love." Arrangements are made and, soon after, a mysterious, chain-smoking beauty named Nadia arrives in London, but there is one catch: the beautiful Russian doesn't speak a word of English in "Birthday Girl."

Poor John, who thought that his love life was going to drastically improve, is, to say the least, disappointed with his mail order bride. He immediately begins making frequent, plaintive calls to the web site's customer service number to no avail. Nadia takes matters into her own hands, so to speak, and gives John a taste of the carnal pleasures he could have. The confused clerk really likes the sex but, still, he can't even talk to his potential bride. After receiving the gift of a Russian-English dictionary from John, Nadia painstakingly looks up the words and announce to her husband-to-be that it is her "birday."

John arranges a little party for the two of them in celebration only to have the soiree crashed by Yuri (Mathieu Kassovitz) and Alexei (Vincent Cassel) who tell their bemused host that Nadia is their little "cousin." Everything seems innocent enough as the quartet celebrates the occasion and set in for a stay at John's digs. This is OK for a while, but John soon grows tired of the intrusion and asks Yuri and Alexei to leave. Then things turn bad.

Alexei flips out over John's demand and violently threatens to scald Nadia with boiling water (and worse) if the bank clerk doesn't give them a lot of money really quick. John, pressured and confused, relents and does the unthinkable - he robs the bank he works at and gives Alexei and Yuri the 90000 pounds he stole. Only then does the hapless victim realize that the three Russians are scamming him. He also learns that the trio has done this exact same flimflam many times before and finds himself tied to a bidet and gagged. Things aren't looking too good for John but there is a silver lining to that black cloud hanging over his head.

This is an enigmatic little film that benefits from the talents of the principle cast despite the very familiar storyline that contains nothing new. The talented actors do yeoman's work to put dimension into their characters and are able, somewhat, to overcome the clichés inherent in the story. The con game - a beautiful woman seduces an unwitting dupe and sets him up for a scam by her cohorts - has been done before. This time, with the inclusion of Russians in the game, we get a bit of a different twist to the proceeds. This translates (no pun intended) to three of the cast (Kidman, Kassovitz and Cassel) given the task of putting a credible spin on both their spoken Russian (I'm no linguist but they sound pretty good to me) and their accented English. All do a fine job.

Ben Chaplin is a lonely everyman character that is stuck in a dead end job - instead of getting a promotion he is given responsibility for the bank's keys to the vault. His one "girlfriend" dumped him ages ago and he sees his only recourse is via the Internet. When Nadia arrives on the scene, John is not prepared for her vivacity and sexual willingness. Chaplin plays John with a bewilderment that, through the violent actions of Alexei, transforms him into a man of action very different from the guy we meet in the beginning. The actor puts a proper befuddled spin on his character that, while he won't garner an Oscar, suits the man and his actions.

The three "Russians" in the film give a decent account for themselves as being, well, Russian. Kidman is, initially, waif-like as she feigns ignorance of her new country's language and endears herself to John. Cassel is quasi-sinister as Alexei, but the dark comedy of the film takes some of his edge away and the expected violence of the character is never allowed to come fully to the surface. Kassovitz comes across well, at first, as the nice, innocent cousin but, when the scam unfolds, he lacks the bad guy persona his character should have.

The screenplay, by helmer Jez Butterworth and his brother Tom Butterworth, is a mix of inventive, like making the antagonists Russian, and routine. It's all entertaining and briskly paced but there is not a lot new to the core story. Techs are straightforward, though pretty pedestrian. "Birthday Girl" is an actor's movie first and foremost.