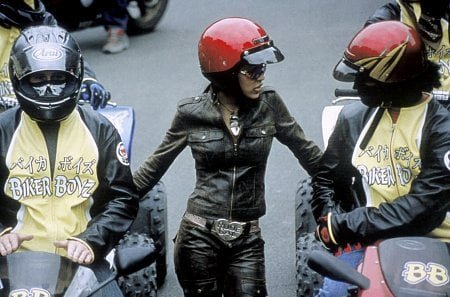 In the rarified atmosphere of the southern California motorcycle street drag racing world Manuel 'Smoke' Galloway (Laurence Fishburne) stands supreme as "The King of Cali," the bikers' undefeated winner over all comers in their underground sport. But, Kid (Derek Luke), the son of his late friend, mechanic and mentor, Slick Will (Eriq La Salle), has plans to take Smoke's "crown' (his racing helmet) and become the new King in "Biker Boyz."

"Boyz" is, unfortunately, an unoriginal and derivative flick that starts out with some energy and imagination but soon becomes a clone of "The Fast and the Furious," but without any of that film's verve. (F&F wasn't a great film, but entertaining, especially when compared to "Biker Boyz," which makes it look like high art. At least F&F had some character development and a script that has some (predictable but fun) twists and turns.)

41-year old Laurence Fishburne has made a bad decision in taking on the starring role as Smoke, the president of the area's biggest motorcycle club, the Black Knights. He seems too old and bloated to play the part of a renegade motorcycle street racer where his excess weight would handicap him in any race he enters. (To make things fair for the reigning King, his opponents should have been required to take extra ballast on their bikes to even things up a bit.) Fishburne, an actor I have admired and liked for years, besides being miscast, is also hamstrung by the dull and lifeless screenplay by the director, Reggie Rock Bythewood, and Craig Fernandez of the Michael Gougis New Times article.

A major problem with "Biker Boyz" is that its large, talented cast of actors is left, virtually, in the dust, like a bad drag racer. Smoke, Kid and a couple of other players are elevated to two-dimensional status, but the rest, including Djimon Hounsou, Lisa Bonet, Lorenz Tate and Salli Richardson-Whitfield, are left behind to fend for themselves. No attempt is made to make them into people, just caricatures of people.

One of the important points that the Gougis article makes is that the members of these night-riding biker clubs are, during the day, white-collared professionals from all walks of life who have a need for speed. Doctor, lawyers, accountants and others turn in their daytime pinstriped suits for a set of leathers, a helmet and a hot set of wheels at night. This aspect of this sub-culture is given short shrift in "Biker Boyz" with only Orlando Jones's character, Soul Train, shown to have a life other than that of a street racer. As such, the average person has nothing to identify with these leather-clad speedsters, except, maybe, for the obligatory show-the-bike-gangs-are-good-guys scene when they stage a bikini babe bike wash to buy schoolbooks for kids. They remind me as the cute-as-a-button bikers in "Mask" who, if I remember, were all blood donors. The film shows the clubs as tribes and not individual with other lives.

Techs start off on the right foot with a long, uninterrupted tracking shot that takes you from the motorcycle-packed streets into the lair of the Black Nights. But things get into the MTV-style of editing with short-attention span cutting of the racing sequences that never really brings us into the action. It's hard to get the feeling of speed with one after another close-up of a speedometer, a fast-spinning wheel or a pair of eyes staring out of a helmet visor. When it gets away from the action the film shifts gears to the "character development," which gets laughable with things like Kid learning the identity of his real father.

"Biker Boyz" is not a pretty picture. The old West gunfighter metaphor is an interesting premise and could have been a good one if put into the hands of a more experience and talented screenwriter and director. Instead, we have a retread of better movies (yes, "F&F" is a better movie), no imagination and a waste of acting talent and the film suffers for it. The real-life bikers hired for the fun motorcycle stunts can't save the film and I give it a D.