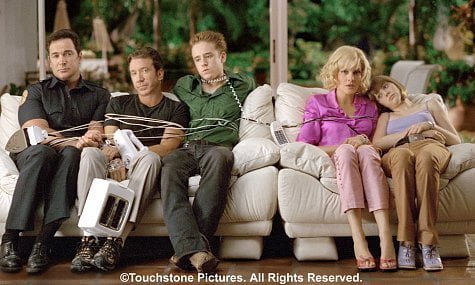 When two New Jersey hit men cross paths with two teenage squirt gunners and some idiot thieves end up with a nuclear warhead, they're joined by a divorced dad, an unhappy housewife, their love struck teens, a dishonest building contractor, Russian arms dealers, two cops, two FBI agents a homeless guy and a dog being plagued by a hallucinogenic toad in "Big Trouble."

If you can get past a loose nuclear weapon, looser airport security and a passenger plane being tailed by two fighter jets ready to shoot it down played for comedy, this last of the 9/11 delayed films may just be for you. As adapted by Robert Ramsey and Matthew Stone ("Life") from humorist Dave Barry's first novel and directed by Barry Sonnenfeld ("Men In Black"), this frothy entertainment goes down quickly and easily leaving no aftertaste.

Puggy's also gotten a job of sorts at a rundown bar where he had a run-in with two dimwitted ex-cons Snake (Tom Sizemore, "Saving Private Ryan") and Eddie (Johnny Knoxville, MTV's "Jackass"). They return to rob the Russian owners just as Arthur is purchasing a bomb. The whole gang ends up back at the Herks before Snake and Eddie head for the airport, with Jenny, Puggy and bomb in tow. They're followed by everyone else except Arthur and Officer Romero, whom FBI agents Greer (Dwight "Heavy D" Myers) and Seitz (Omar Epps, "Love and Basketball") find handcuffed to a brass wall unit.

With this huge cast of characters zipping around with all this activity in a scant 85 minutes, there's next to no opportunity for anything resembling character development. This is a bright, colorful romp that's grounded by running gags involving TVs being shot, Martha Stewart and boneheaded Gators fans. While the Miami location was an important element of Barry's book, the film has closed ranks, keeping the action within a handful of locations, but it's suggested nonetheless by a few palm trees, Anna Herk's citrus colored wardrobe, the international airport and the scorn of the Jerseyites.

The cast are all paired off in one way or another. Tim Allen's everyman is undone by Rene Russo's Monroe-ish crinklings. Garofalo's competency is hamstrung by Warburton's dense womanizing just as Farina's sharpness is dulled by Kehler's literal mindedness. Deschanel's deadpan cuts through Sizemore and Knoxville's stupidity but is eagerly received by the puppyishly enthused Foster. Tucci's over the top of even this bunch, never more so than when he sucks Vergara's toes. Andy Richter is his own duo as twin brothers, both security guards. Roger the dog is hounded by an animatronic toad.