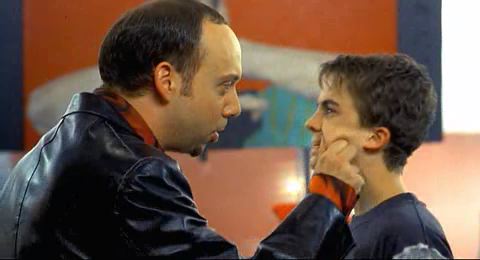 Jason Shephard (Frankie Muniz) has an aversion to working hard at school and has learned that a good, whopping lie can make his life a little easier. But, his luck has finally run out. He fails, for the first time, to con his English teacher (Sandra Oh) and must turn in an important mid-term paper in a matter of hours or face having to attend summer school. Inspired by the threat, Jason does the thing he is best at and spins a yarn in record time. He thinks he's in the clear, but a collision with the limousine of an unscrupulous movie producer will change his life completely in "Big Fat Liar."

Jason, forced to take his little sister's bike to make his deadline, runs into the limo of movie producer, Marty Wolf (Paul Giamatti), who is in Michigan shooting a film. With his ride now bent and useless, Jason begs a lift with Marty and we catch a glimpse of what the boy, himself, may become if he doesn't stop his constant lying. He inadvertently leaves the important paper, a story titled Big Fat Liar, in the car and fails to pass the course and, much against his will, must attend summer school. Months later, he makes the most out of the situation and heads to the movies with his best friend Kaylee (Amanda Bynes). While watching the coming attractions, Jason realizes the story being told is straight from his mid-term and it is produced by none other than Marty Wolf and it is titled "Big Fat Liar."

Jason sees this as a way to get back the trust of his parents, especially his dad (Michael Bryan French), and sets off with Kaylee to go from Michigan to Hollywood to confront Marty with his affront and have the nasty producer call Jason's dad and confess, with no other strings attached. The arrogant Wolf disdains the idea and refuses to honor the teen's simple request even though he admits to stealing the boy's story. Now, it's war as Jason schemes to force Marty to his will but is thwarted every time by the wily producer even when he finds himself dyed blue with bright orange hair. Along the way to revenge, Jason finds that the people who work for the egotistical, demanding Wolf also have a grudge and the wheels of vengeance are put into high gear.

The far-fetched, old-fashioned Hollywood fantasy story (14 year-olds are always traveling halfway across the country to prove a point, aren't they?) is merely a framework to hang the comedy upon. Normal things, like eating and sleeping, don't hinder Jason and Kaylee in the quest. Need a place to stay? The wardrobe and prop department at Marty Wolf Studio will do just fine. This is the kind of entertaining unreality that seems a bygone thing but fits "Big Fat Liar" quite well. Marty Wolf is unlikable enough to cause the ranks that join Jason's cause to swell and, as the climax approaches, it becomes a military operation broken into four phases ? Surveillance, Takedown, The Twist, and The Payback. Jason must pit his smarts and newfound belief in truth and honesty against the selfish meanness that is Marty.

Acting is uniformly even from the stars to the supporting cast. Frankie Muniz, with his wide-eyed, innocent looks and comfort level in front of the camera, makes his Jason a likable rogue who knows how to think on his feet. With a character that can come up with a lie at the drop of a hat, and this being a young teen flick, the inevitable "the truth shall set you free" theme hits you over the head, but Muniz holds his own as Jason. Veteran character actor Paul Giamatti has not, until now, had the chance at a lead role. As the shallow, selfish, nasty, arrogant Marty Wolf, Giamatti gets to play a cartoon-style bad guy and brings it over the top. Marty is the kind of guy you love to hate but the actor imbues just a tiny sliver of humanity into the producer so you don't want him totally destroyed. Giamatti puts his all into the blustering physicality of his character.

Nickelodeon TV star Amanda Bynes is cast in the sidekick role as Jason's best buddy Kaylee. The young actress fills the part very well and shows a great deal of comic and acting talent; particularly with her several phone conversation bits. Kaylee is the voice of reason for Jason and helps keep his hare-brained schemes in check. Amanda Detmer, as Marty's put upon and harried assistant producer, Monty, whom he constantly pressures to fix the things that he screws up with his lies, happily gets her own reward when she gives Jason the dirt he needs on Marty. Donald Faison is amusing as Frank Jackson, the chauffeur who teams up with Jason and Kaylee when he finds out that they are out to get the man that ruined his chances as an actor. Icon Lee Majors makes an appearance as Wolf Studio's stunt coordinator, a veteran who has, up to now, put up with the crap that Marty dishes out with vigor.

First-time helmer Shawn Levy does a no frills job in pushing the clichéd but entertaining story along briskly. It must be nice to get to make a film on the Universal Pictures back lot and use that wonderful locale as part, even a character, of the film. This gives rise to the inevitable clothes-changing montage and music video romps around the movie lot. The tech staff joining the helmer does yeoman's work and crank out a well-crafted if ordinary flick.

"Big Fat Liar," with its young TV stars, comic bad guy and goofy fun, is aimed squarely at the older kids/younger teen audience. With its plethora of site gags, harmless vengeance and comic antics, it should strike pay dirt at the box office. I wouldn't recommend it as fare for adults without kids (unless you yourself are a real kid at heart) but there is enough father and son stuff and messages about honesty to make it light-hearted, fantasy family fare.