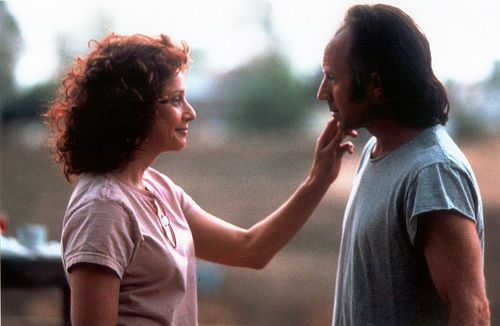 Leon Barlow (Arliss Howard) is a troubled Vietnam veteran who is struggling with a faltering writing career, wild mood swings and a serious drinking problem. His troubles forced his wife Marilyn (Debra Winger) to leave him and take their kids, Alan (Zach Moody) and Alisha (Olivia Kerset), with her. He tries to turn his life around but it may all be too little too late in "Big Bad Love."

Based on the short stories by Larry Brown, first time helmer Arliss Howard and James Howard co scripted this story about a guy for whom the bottom of the barrel could well be a step up. Barlow lives his life in an alcohol-induced haze that caused his marriage to fail, estranged him from his kids and pushed the man to an existence of isolated despair and confusion. When we first meet the man it is in a flurry of a sexual encounter shot in close up. Images of a wedding dress and a bathtub segue to Leon's friend, Monroe (Paul Le Mat), banging on the door trying to get Barlow's attention. Suddenly, Leon is in the tub, alone, as he stirs from yet another morning after the night before and we realize his sexual encounter is all a drunken dream.

This sets the stage for a character study of a man trying to make sense out of his life. Leon is obviously a troubled guy. Flashbacks to his Vietnam experience set the stage for his current woes as he dreams, thinks, even hallucinates about his past. Images of his marriage and its failure permeate his waking and sleeping hours, blurring the area between reality and delusion. Monroe, a blue-collar housepainter who happens to be a multimillionaire, tries to help his friend and gives him a job. For the first time in a long time, Leon is able to provide his ex, Marilyn, with the child support he has avoided for so long. With his visiting rights restored, Barlow begins to consider that he may be able to get his life back in shape.

There is a problem with his plan, though. Every day his mailbox is stuffed with his returned manuscripts and the ever-present rejection letters. His frustration drives him back to the bottle as he struggles with his problems and failures in life. After one drunken binge he shows up at his house only to be confronted my his mother (Angie Dickinson), left to take care of his kids (it's his visit day for them) and stranded with them, outside, on a hot summer's day. His pleads of "I'm sorry" fall upon deaf ears as mom has heard this all before, and frequently. It takes a series of events, catastrophic ones, to jump start Leon's life back onto a more normal path.

Howard's tyro helming and scripting effort is an uneven blend of confusion and vision. There is a strong surreal quality to the film that can be either intriguing or confusing as Barlow struggles with his personal problems, responsibilities and ambitions. The lines between reality and the machinations of his addled brain keep Leon in a constant state of flux as he tries to clear the cobwebs from his head after his drinking bouts. Howard, the actor, gives a solid character study of Barlow as the vet tries to turn his life around, but finds a liquor bottle at every turn. It is a strong performance and the first time Howard has had the lead in a film. He acquits himself well, though, and, in the end, puts an arc on his role that draws away from the drunken sot Leon has become and ends with an upbeat note of a man redeemed.

Other elements of the story combine dream, imaginings, hallucinations and oddball realities that prevent a linear telling of Barlow's woes. There are elements of style in this kitchen sink of ideas, but the near-erratic switching between Leon's drunken acts and the workings of his mind tend to muddle things, fragmenting the character study too often. I would be curious to see what "Big Bad Love" would have been in the hands of a more experience director. The script, too, could have used a more experienced hand as it jumps back and forth between Howard's study of the Barlow, his family life (or lack thereof) and his relationships with those around him, but always focused on Leon.

The supporting cast is kept to secondary status. Debra Winger (Howard's real life wife), as ex-wife Marilyn, has given up on Leon a long time ago. His conciliatory efforts to take responsibility for his life do not make a dent in the emotional armor she has developed over the years and she is not duped by his attempts to become "normal." The actress, back on the big screen after a six-year hiatus, does not emerge from the background of Leon's life until near the end of the film. Angie Dickinson is a powerhouse as a mother who has had to cope with the disappointments caused by her son, but is given too little screen time. Paul Le Mat and Rosanna Arquette provide quirky perfs in their small roles as Leon's friends. None, other than Howard, are given a lot to do.

"Big Bad Love" is definitely an interesting character study of a man on a downward spiral in his life. The self-destruction is, sometimes, painful to watch but the final note of redemption cushions Leon's long fall, giving the film an upbeat note in the end. The surrealistic imaginings of Barlow's mind are compelling, but confused, and distracting, at times. Note that there is a great deal of alcohol consumption throughout the film, to the point where I was getting a hangover just from watching. The draw, though, is a solid performance by Arliss Howard. Score, by music icon Tom Waits, is, surprisingly, not involving.