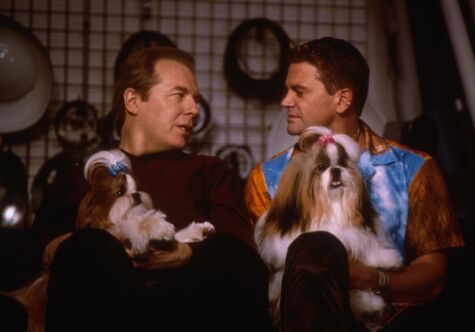 It's a dog eat dog world out there and the tension is tangible as hundreds of contestants from across America come together to participate in the greatest event of their lives - the Mayflower Kennel Club Dog Show. Director Christopher Guest follows five sets of contestants and their prize canines as they journey to Philadelphia to compete in the prestigious event in the mock documentary, "Best in Show."

Director/cowriter/star Christopher Guest follows up his sweet small town show comedy "Waiting for Guffman" with a loony look at a wildy assorted bunch of nuts who live for their pooches in "Best in Show." While not as even as his prior effort, "Best in Show" offers some inspired comic performances wrapped up neatly at the climatic (and fictious) Mayflower Dog Show.

Guest and his cowriter and star Eugene Levy introduce us to the cast in their own environments. Appropriately Meg and Hamilton Swan (Parker Posey and Michael Hitchcock, "Waiting for Guffman") are first found in a psychiatrist's office because their Weimaraner Beatrice is depressed after witnessing them recreating a Kama Sutra act. Of course, it's really Meg and Hamilton, catalog shopping, brace wearing yuppies, who have the problems. Their freakouts are initially funny, but become shrill with repetition, making them the least engaging of the dog owners.

Cookie and Gerry Fleck (Catherine O'Hara and Eugene Levy, "Waiting for Guffman") are a blue collar couple who compose and sing songs praising the charms of the Norwich Terrier for their neighbors. Gerry is dismayed to discover just how many former boyfriends his bubbly wife Cookie had, but that's nothing compared to the trauma of having to show Winky when Cookie's injured because Gerry literally has two left feet. O'Hara and Levy are reliable members of Guest's troupe and work good comic improvisation here.

Stefan Vanderhoof (Michael McKean, Guest's costar in "This Is Spinal Tap") and Scott Donlan (John Michael Higgins, "Jeffrey") are a gay couple with joint Shih Tzus who hope their Miss Agnes will win. Stefan's the older, more grounded but lovingly indulgent partner while Scott camps outrageously (and hilariously) while constantly fussing over his wardrobe.

Steel baron Leslie Ward Cabot (Patrick Cranshaw, "Everyone Says I Love You") and his trophy wife Sherri Ann (Jennifer Coolidge, "American Pie") own Mayflower's two time winning standard poodle Rhapsody in White. Sherri Ann's affections appear to be won by their handler, however. She's Christy Cummings (Jane Lynch, "The Fugitive"), a butch kennel owner who's climbed atop the heap via the Cabots' sponsorship. Lynch gives a terrific performance as a tightly wound dog person who's over confidence covers deep rooted insecurities. Coolidge is a ditz who believes her way with a makeup trowel makes her an artist while her plastic surgery enhancements approach those of real life socialite Jocelyne Wildenstein. Cranshaw has no dialog, appearing to have one foot in the grave already, and quickly drops out of the picture.

Guest himself is Harlan Pepper, a Southern fly-fishing shop owner who just adores his bloodhound Hubert. He's the most low key, but listen for his subtle comedy when he discourses on fly-fishing tackle at the pre-show reception.

The true star of "Best in Show," however, isn't one of the competitors, but the Mayflower's vapid color man Buck Laughlin (Fred Willard, "Waiting for Guffman"). His jaw-droppingly inane, non-stop prattle is an inspired parody of any TV commentator who's tried to fill dead air space with the sound of his own voice. Playing beautifully against Willard is Jim Piddock as Trevor Beckwith, a British dog expert who gives up even attempting to converse with Buck.

Guest allowed his cast to improvise based on his and Levy's story outline and shot sixty hours of film, which he's whittled down to just over 90 minutes. This collaborative effort looks like it was about as much fun to make as it is to watch.

Helmer and co-writer Guest got his mockumentary chops when he teamed with Rob Reiner, Michael McKean and Harry Shearer in creating the brilliant fake docu in the 1984 film, "This is Spinal Tap." In 1996, Guest joined with Eugene Levy to create another mock doc in the charming tale about the trials and tribulations putting together a small town pageant in "Waiting for Guffman." Now, again with Levy, he tackles the wild and wacky world of dog shows. Inspired by the trappings and scope of the famous Westminster Kennel Club's annual event, Guest and his ensemble cast of the usual suspects bring us into a world where pooches reign and owners vie for that precious blue ribbon of a winner.

Joining Guest is a bevy of regulars who have worked with the helmer over the years, along with some newcomers to his creative acting team. Michael McKean is New York City hair salon owner Stefan Vanderhoof whose longtime partner, professional dog handler Scott Donlan (John Michael Higgins), has entered their precious Shih Tzu, Miss Agnes, as a contender for the Mayflower doggie throne. Gerry and Cookie Fleck (Levy and Catherine O'Hara), a mild-mannered salesman and his popular wife from Fern City, Florida, have entered their handsome Norwich Terrier, Winky, as a contestant in the show. Meanwhile, a pair of neurotic yuppie lawyers, Meg (Parker Posey) and Hamilton Swan (Michael Hitchcock), have hopes that their nervous Weimaraner, Beatrice, will be the big winner. Harlan Pepper (Guest) from Pine Nut, North Carolina, thinks that his prime specimen of a Bloodhound, Hubert, is the one to win. Finally, the wealthy and very aged Leslie Ward Cabot (Patrick Cranshaw) and his voluptuous trophy wife, Sherri Ann (Jennifer Coolidge), are certain that their two-time champion Standard Poodle, Rhapsody in White, will once again go home with the gold.

Guest follows this group of contestants as they prepare to leave for the Mayflower show, interviewing each as they tell him their hopes and aspirations to win the prestigious event. They all take to the road, in a variety of ways, and head toward their collective destinies at the important canine event. Color is added to the various preparations and journeys, particularly for Gerry and Cookie as she convinces her husband, against his will, to make a side trip to visit an old boyfriend. Gerry soon learns that Cookie didn't have dozens of boyfriends before meeting him, she had hundreds! And these old boyfriends keep popping up though out the film, much to Gerry's chagrin and our amusement.

The film meanders through the first half with the preparation and journey to Philly for each team of dog and owner(s). At the mid-point, I was declaring "Waiting for Guffman" as far better than "Best in Show." Then, the "show" really begins. The second half takes an upturn as the filmmakers recreate the pageantry of a top-notch, pure-breed dog show while the actors interleave their improvisational humor with the seriousness of the event. If you've ever spent the two days a year watching the Westminster dog show on TV, you'll find that Guest and company did their homework well.

The mainstay of part two, in addition to the little, humorous dramas unfolding for the contestants, is Fred Willard's outrageous perf as the unlikely color man for the TV coverage of the Mayflower show. Buck Laughlin is a sportscaster by trade who is brought in to commentate on the action with the real dog show expert, Trevor Beckwith (Jim Piddock). Buck doesn't have a clue about dogs and dog shows, but that doesn't stop him from making off-color remarks and non-sequiturs about the action on the floor. Willard's not stop, wacky chatter helps make the second half the funniest.

The large ensemble cast is given a lot of latitude in their mostly ad-libbed performances of some rather eccentric characters. Chris Guest is a true chameleon and puts a deft spin on his North Carolina bait shop owner, Harlan, coming across every bit as the kind cracker who loves his dawg Hubert. John Michael Higgins steals the show as the flamboyant dog handler extraordinare and Stefan's lover. He plays up his naughty role, making lewd sexual innuendo one of his favorite pastimes. Of the rest of the cast Jane Lynch makes the next greatest impression as the self-assured dog handler Christy Cummings, who trains Sherri Ann's prize poodle and has a thing for her boss, too.

Coolidge, as Sherri Ann, strikes the right bosomy bimbo note as a lady who didn't get to where she is, fabulously wealthy, because of her brains. Guest's frequent collaborators - Levy, O'Hara, McKean and Bob Balaban, as Mayflower Kennel Club President Dr. Theodore W. Millbank III - all give funny perfs and put a human spin on their individual characters. Another of the director's regulars, Parker Posey, and Michael Hitchcock, fare the least well as a pair of shrill, noisy yuppies who are the reason their dog is neurotic. The dogs are champions, every one.

Guest and crew do a decent job of creating a real looking mock doc that captures the essence of a big deal dog show. The characters that he follows are uniformly amusing (though Meg and Hamilton grate on the nerves early on) and their ability to improvise give the film the feel of a real group effort.

The behind the camera efforts are first rate. "Waiting for Guffman" cinematographer Roberto Schaefer creates a genuine looking faux doc, shooting in super 16mm with handheld camerawork to add to the reality. Another of Guest's usual suspects, Joseph T. Garrity, handles the production design, from the households of the contestants to the show itself, with distinctive flair.

"Best in Show" doesn't have the homey, even-handed charm of "Waiting for Guffman," but it stands on all fours as a movie for and about dog lovers and what those, at the levels shown here, are willing to go through to bring their beloved pets to victory. The first half bogs down, but once the show itself starts up, it all becomes OK. This is good, clean fun (there's even a bit by Ed Begley Jr. that discusses the merits of doggie cleanup products) that is true family entertainment.