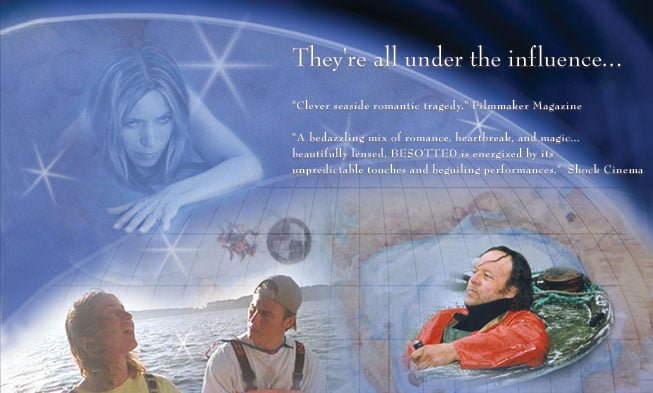 Vacationing on Cape Cod, sorceress Holly (first time writer/director Holly Angell Hardman) amuses herself by dabbling in the fates of the local populace. With a cauldron bubbling on her lawn, Holly sets up a giant game board, a nautical map which she moves objects about on. And so a handsome college man, Damien (Liam Waite, "Simpatico") catches the eye of older woman Vicky (Susan Gibney, "The Waterdance"), a lobsterwoman who gives him a job on her boat while lapsed fisherman and local drunk Shep (Jim Chiros, "The Proposition") yearns for ex-love Vicky in "Besotted."

Hardman professes to have written an 'anti-romance,' but this jaw-droppingly inept film is instead anti-audience. Hardman, a horrendous actress whose every move is unnatural to her camera, has plopped herself into the midst of a cast too good for this material.

As Vicky yearns for one night stand Damien, Shep inexplicably begins to view her every move from the local playhouse theater. Character actress Amy Wright ("The Accidental Tourist") has little to do as local herbalist Mona, yet Hardman writes another useless female character, Nicole, into the story as well as a woman who comes out from the city to 'help' Holly. Everyone ends up miserable or worse while these three sing and cavort in a scene that would embarrass a grade school production.

Chiros is the film's best asset as Shep. The script may put him through dumb paces, but Chiros makes Shep a sympathetic character. Gibney is also a natural, although a slight tendency to push her performance too far is never reigned in by a director who obviously knows nothing about acting. One wonders why Wright, the only real name in the cast, chose this vehicle to return to the screen after a long absence, as her performance here labels her a has-been rather than a comeback.

From the choppy editing to the annoying score to 'special effects' by way of replacing objects in a character's hands below the camera line, "Besotted" is misbegotten.