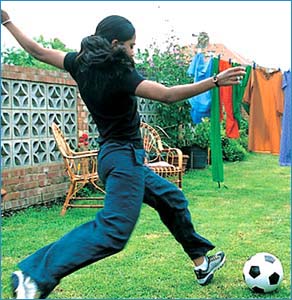 Cowriter (with Guljit Bindra and Second Unit Director Paul Mayeda Berges, "What's Cooking?")/Producer/Director Gurinder Chadha ("Bhaji on the Beach," "What's Cooking?") spikes one out of the park with her enormously entertaining, cross-generational and cross-cultural sports/romantic comedy. While there is nothing being explored in "Bend It Like Beckham," that hasn't been seen on cinema screens before ("East Is East," "Monsoon Wedding" and "Love and Basketball" come immediately to mind), Chadha's film is so beautifully crafted that it reminds one just how good populist screen entertainment can be.

British football (soccer) star David Beckham's name may not be familiar stateside, but in Europe he's a superstar and constant tabloid fodder as husband of Victoria 'Posh Spice' Beckham. The film's title refers to his ability to kick the ball into a curve, while also working as a metaphor for Jess's aspiring to a life outside of traditional boundaries.

When Jules spies Jess nimbly outplaying a bunch of guys in a London park, she introduces herself and suggests Jess try out for her girls' football team. Astonished that such a thing exists, the enthusiastic Beckham fan impresses the coach, Joe (Jonathan Rhys Meyers, "Velvet Goldmine"). The girls grow close, leading Jules's ultra-feminine mum (Juliet Stephenson, "Nicholas Nickleby") to suspect a lesbian attraction. The dangerous attraction, though, is the one both girls have for Joe.

As Mrs. Bhamra worries over Jess's ability to make the perfect chapatti, Jess lies about playing in the league. When she's discovered, a blow-up ensues that even Joe, braving Jess's outraged mother, cannot put to rights. Furthermore, Pinky's future mother-in-law spies Jess with short-haired Jules and accuses her of canoodling in public, calling off her son's marriage in light of the apparent scandalous behavior. Jess concocts another story in order to join the team for a highly publicized match in Germany, but her friendship with Jules is blown apart when Jules finds Jess in a romantic clinch with Joe. The Bhamras discover their daughter's deception, but it is blown over when Pinky's fiance's parents relent. Joe arranges for American agents recruiting for women's soccer scholarships to attend a big game - that is to take place on the same day as Pinky's new wedding date.

Chadha directs an exceptional ensemble cast so that every character makes an impression, their combined efforts creating a multi-tiered community. Newcomer Nagra has a fresh vitality and genuine talent for football (she had never played before getting the role). Her cultural background is reflected in the deference her character puts on with a sari when ordinarily she's a normal English teen who happens to confide in the David Beckham poster hanging over her bed. The dichotomy is most humorously visualized by Chadha with a scene of Mrs. Bhamra instructing in the cooking of an Indian dish in the foreground as Jess bounces vegetables off her pistoning knees in the background. Rhys Meyers has previously projected a heroin-chic male model coolness on screen, but here he astonishes with his clear-eyed warmth and Irish charm. Meyers and Nagra have incredible screen chemistry.

In another casting coup, Keira Knightley engages as the tomboy whose footballing is embraced by her dad (Frank Harper, "Lock, Stock and Two Smoking Barrels") but terrifies her uncomprehending mum. Harper is an easy going working-class guy while Stephenson is a scream as a pastel-taloned Martha Stewart wannabe whose attempts to relate to her daughter's friend are hilariously embarrassing. Kher is Harper's Indian reflection, softening when confronted with his daughter's football skill in light of a long held bitterness against the English who kept him off their cricket team, while Khan is Stephenson's comical counterpart. Archie Panjabi is deliciously self-absorbed and bitchy, slinging London slang with her over-coiffed clique. Also of note is Ameet Chana as Tony, Jess's best friend who harbors a surprising secret. Chadha successfully works in her own extended family members for delightfully chaotic Bhamra family gatherings.

The film also sports a distinct and unique look accompanied by a cannily chosen soundtrack. Director of Photography Jong Lin follows the action smoothly from the inside whether covering a football match or traditional Indian engagement party. The Bhamras' neighborhood of semi-detached homes is dwarfed by the jets which anticipate far-flung family. Production designer Nick Ellis creates a beautiful mix of India and middle-class Britain for the interior of the Bhamras' home, while festive wedding lights delineate the exterior like a runway. Editor Justin Krish makes montage seem fresh, moving the action along, and brilliantly cross cuts the film's dual climax. The film's soundtrack also crosses generations and cultures, including covers of Tom Jones's "She's a Lady" (for a football practice sequence) and Indian pop music

"Bend It Like Beckham" is a sheer delight. It won't leave you feeling bad about feeling so genuinely good.

Jess Bharma (Parminder Nagra), the daughter of a traditional Sikh couple transplanted to England, is an ace on the soccer field, at least when she plays among her male friends. She is also a huge fan of British football great David Beckham, but, as she approaches the age of marriage, her parents forbid her to play the game and learn to cook the perfect chapatti. An English girl, Jules Paxton (Keira Knightley), sees Jess's remarkable potential and invites her to try out for an amateur girl's team. Jessie agrees and joins the Hounslow Harriers but must hide her secret life from her mother and father if she wants to "Bend It Like Beckham."

Advertising blurbs of "a real crowd pleaser" and "the feel good movie of the year" would suit "Bend It Like Beckham," but the real question is: Is it a critic pleaser? The film, with its positive girl-be-all-you-can-be message, definitely has what it takes to garner popular appeal. The surprise is that it is such a deftly handled, richly cast and crafted film that the critics, normally a curmudgeonly group of folks, will also come out feeling good.

There is nothing all too original in the story of a young, aspiring athlete breaking with family tradition to seek her own life. What makes "Beckham" special is the marvelous, intelligent way the story, by helmer Gurinder Chadha, Guljit Bindra and Paul Mayeda Berges, takes its basic premise and weaves in multiple cultures, functional families (it is a pleasure to see family life depicted as normal instead of dysfunctional), healthy ambitions, humor, friendship and desire to do one's best.

The cast is easily one of the best ensembles of the year. Petite Parminder Nagra lends Jess a wide-eyed wonder as she comes to realize that her gift for football is not something that she has to give up because family "tradition" dictates it. She is at the cusp of her life where she can either pursue her dreams or succumb to the will of her parents to be a good Sikh wife. Newcomer Nagra displays the physical ability on the field and acting ability when off to make Jess an eminently likable character.

Keira Knightley is pretty and perky as Jules and provides the physical contrast to Jess. Mentally, though, they are of like mind in their love for their sport and their mutual interest in their coach, Joe (Jonathan Rhys Meyers), even though the team rules make him strictly off limits. Joe is a fully developed character who has the hots for Jess but understands his responsibilities to his job and the team. Bollywood superstar Anupam Kher makes his English language feature debut and positively anchors the film as Jess's father. He, too, once loved a sport, cricket, but gave it up when he moved to England because of racial prejudice. His Mr. Bharma is conflicted between helping his daughter avoid his mistakes and protecting her from such life disappointments.

Archie Panjabi wonderfully plays the tarty sister, Pinky, who is perfectly willing to follow the family traditions and be a loyal Indian wife as longs as she is a pampered Indian wife. She understands her sister's needs but is not willing to jeopardize her own life for soccer. Juliet Stevenson (who so stole the show as the wicked school marm in "Nicholas Nickleby") is funny as Jules's mother Paula, a lady who doesn't understand football, fears her daughter is a lesbian but really wants to be a supportive mom. Shaheen Khan is terrific as the traditional Indian mother who expects her daughters to walk the same path as she. Even background characters, like Jess's cousin Tony (Ameet Chana), are rendered as real people.

The dynamic combo of well-crafted production, a smart script and wonderful ensemble cast makes "Bend It Like Beckham" a special film that will (and deserves to have) appeal to a broad demographic. There are solid teen values, positive family influence, wry and touching humor and just an all-around good story.