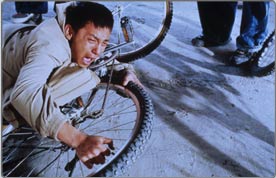 Country boy Guei (Cui Lin) arrives in Beijing and procures a job at Fei Da Express Delivery and a mountain bicycle which will become his when his sales reach a certain level. City boy Jian (Li Bin) is frustrated by his father's unkept promises to buy him a bicycle, so steals family money and buys a second hand one, which turns out to have been stolen from Guei. Both boys' fates become intertwined by their attachment to this "Beijing Bicycle."

Writer/director Wang Xiaoschuai may deny the influence of de Sica's "The Bicycle Thief," but comparisons are undeniable. Xiaoshuai's film is also a pictorial odyssey where a man searches for a stolen bike that equates to his livelihood, although this Beijing tale also emphasizes the social and economic differences between rural and urban upbringings.

Hardworking Guei's biggest hurdles aren't the physical labor or scale of his territory, but the strangeness of a revolving door and a private men's club he's directed through in a hotel. He's awestruck by the sophisticated beauty of Qin (the gorgeous Zhou Xun), a customer of his buddy Qui Sheng's (Li Mengnan). When his bike is stolen and he fails to make a delivery, he's fired, but his boss is so impressed with Guei's singlemindedness that he promises to hire him back if Guei manages to find his bike.

The impossibility of Guei's task is highlighted by Lui Jie's cinematography, which portrays Beijing from amidst a sea of spokes, but Guei does find his bike. In a surprising turn, however, its current owner, Jian, chases him down and retrieves it assisted by his school friends. Jian prizes the bicycle for the social standing it affords him, enabling him to court pretty classmate Xiao (Gao Yuanyuahn). As both prize the bike, neither is willing to let it go and "Beijing Bicycle" leads them down an unexpectedly dark path.

Xiaoschuai's film is surprisingly compelling in that few of his characters are likeable. Grocery stall owner Qui Sheng provides practical advice and friendship to Guei, however Guei himself, while admirably hardworking, is essentially a victim. Jian is a thief and a liar suffering from parental favoritism and peer pressure while his romantic interest Xiao has her head turned by the flashy stunts of a boy on a better bike. Mystery girl Qin's red heels, another stylish mode of transportation, mask her ironic identity.